The Curative Effects of Foot Baths 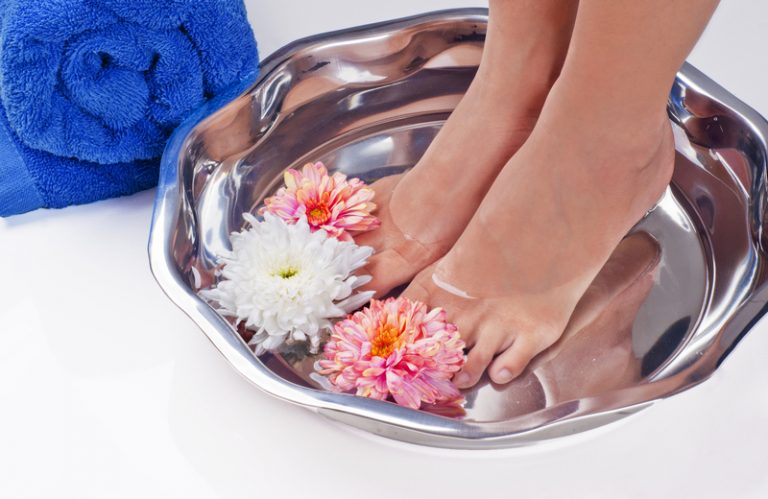 These days soaking one’s feet in hot water is generally used as a way to relax, but foot baths can be used for much more than that. Since ancient times, foot baths have been widely used in traditional Chinese medicine (TCM) for health preservation and treatment. Several medical studies have shown that foot baths help alleviate depression, symptoms of menopause, pain, and other ailments.

The benefits of foot baths have long captured the attention of TCM. Foot baths have the advantage of being simple and effective, and they have been popular for thousands of years.

The famous TCM physician Hua Tuo (A.D. 140-208) emphasized the importance of the feet in his book The Way of the Heart. He wrote: “When a tree withers, the root dies first; when a man ages, his feet fade first.” He pointed out that it is very important to have foot baths during each of the four seasons, and there are different effects for each season. “Soaking in the spring, the yang in your body rises. Soaking in the summer, you can get rid of heat and dampness. Soaking in the autumn, your lungs and intestines are moistened. Soaking in the winter, your abdomen warms.”

Hua Tuo talked about the benefits of soaking one’s feet even in the heat of summer. In summer, heat and humidity are at their highest, which makes people drowsy, fatigued, irritable, and experience a loss of appetite. Foot baths in summer can remove the heat and dampness, make you feel refreshed, increase your appetite, and promote improved sleep.

Emperor Qianlong (A.D. 1711-1799), the longest-lived emperor in Chinese history, was also a lover of foot baths. He summed up his regimen as “three hundred steps in the morning and a pot of soup in the evening.” The pot of soup he referred to was a foot bath.

The principles of reflexology state there are zones on the feet that correspond to various viscera and organs. Soaking your feet in hot water can stimulate these reflex zones, promote human blood circulation, improve the function of organs, and regulate the endocrine system which can not only prevent diseases but also have a good auxiliary effect on the treatment of many diseases.

Foot baths are a commonly used treatment in traditional Chinese medicine for various maladies. Adding different traditional herbs and medicines to the hot water can relieve various pains in your back, legs, shoulders, and neck and can treat various diseases, such as those of the nervous system and gynecological diseases.

In January 2021, the Korea University Medical School published a study on the improvement of depression and physical pain by using foot baths in the Journal of the Korean Maternal and Child Health Association. The study included 23 single women who took a foot bath once a day for 4 days. The average depression score was 9.39 before the foot bath, which decreased to 5.87 points after receiving the foot baths for two days. Four days after the foot baths, it decreased even further to 5.35. The body-average pain score also decreased from 5.39 to 4.43 and then 3.96, respectively.

The method of taking a foot bath is very simple. Soak your feet in water that is higher than body temperature, generally, 100°F to 109°F is enough. The depth of the water should be anywhere from the ankle to the middle and lower part of the calf. The suggested soaking time is 20 to 30 minutes. The foot bath must occur every day to achieve the best effects on your health. You can add vinegar to the warm water to promote blood circulation, ginger to dispel cold, or Epsom salts to help with sleep and provide anti-aging benefits.