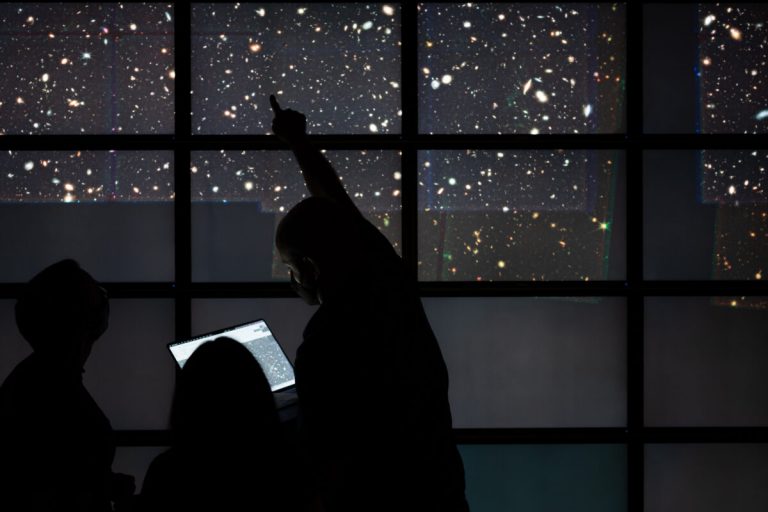 Two new images from NASA’s James Webb Space Telescope show what may be the earliest galaxy ever observed. Both images include objects from more than 13 billion years ago, and one offers a much wider field of view than Webb’s First Deep Field image, which was released amid great fanfare on July 12. The images represent some of the first out of a major collaboration of astronomers and other academic researchers teaming with NASA and global partners to uncover new insights about the universe.

Maisie’s galaxy among the earliest ever discovered

The team has identified one particularly exciting object — dubbed Maisie’s galaxy in honor of project head Steven Finkelstein’s daughter — that they estimate is being observed as it was just 290 million years after the Big Bang (astronomers refer to this as a redshift of z=14). The finding has been published on the preprint server arXiv and is awaiting publication in a peer-reviewed journal. If the finding is confirmed, it would be one of the earliest galaxies ever observed, and its presence would indicate that galaxies started forming much earlier than many astronomers previously thought.

The unprecedentedly sharp images reveal a flurry of complex galaxies evolving over time — some elegantly mature pinwheels, others blobby toddlers, still others gauzy swirls of do-si-doing neighbors. The images, which took about 24 hours to collect, are from a patch of sky near the handle of the Big Dipper, a constellation formally named Ursa Major. This same area of sky was observed previously by the Hubble Space Telescope, as seen in the Extended Groth Strip. Finkelstein, associate professor of astronomy at The University of Texas at Austin and the principal investigator for the Cosmic Evolution Early Release Science Survey (CEERS), from which these images were taken, said:

“It’s amazing to see a point of light from Hubble turn into a whole, beautifully shaped galaxy in these new James Webb images, and other galaxies just pop up out of nowhere.”

The CEERS collaboration is composed of 18 co-investigators from 12 Institutions and more than 100 collaborators from the U.S. and nine other countries. CEERS researchers are studying how some of the earliest galaxies formed when the universe was less than 5% of its current age, during a period known as reionization. Before the actual telescope data came in, Micaela Bagley, a postdoctoral researcher at UT Austin and one of the CEERS imaging leads, created simulated images to help the team develop methods for processing and analyzing the new imagery. Bagley led a group processing the real images so the data could be analyzed by the whole team.

The large image (medium res/high res) is a mosaic of 690 individual frames that took about 24 hours to collect using the telescope’s main imager, called the Near Infrared Camera (NIRCam). This new image covers an area of the sky about eight times as large as Webb’s First Deep Field image, although it is not quite as deep. Researchers used supercomputers at the Texas Advanced Computing Center for the initial image processing: Stampede2 was used to remove background noise and artifacts, and Frontera, the world’s most powerful supercomputer at a U.S. university, was used to stitch together the images to form a single mosaic, Finkelstein said:

“High-performance computing power made it possible to combine myriad images and hold the frames in memory at once for processing, resulting in a single beautiful image.”

The other image (medium res) was taken with the Mid-Infrared Instrument (MIRI). Compared with NIRcam, MIRI has a smaller field of view but operates at a much higher spatial resolution than previous mid-infrared telescopes. MIRI detects longer wavelengths than NIRCam, allowing astronomers to see cosmic dust glowing from star-forming galaxies and black holes at modestly large distances, and see light from older stars at very large distances. The entire CEERS program will involve more than 60 hours of telescope time. Much more imaging data will be collected in December, along with spectroscopic measurements of hundreds of distant galaxies.

Provided by University of Texas at Austin [Note: Materials may be edited for content and length.]