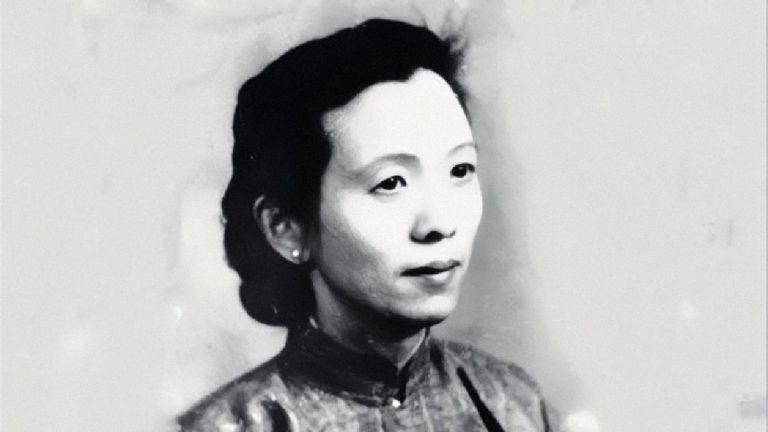 In April 1949, during the military occupation of Nanjing by the Chinese Communist Party (CCP), Chen Xiuliang, who was regarded as one of the “six beautiful spies,” played a pivotal role in its takeover of the Republic of China (ROC).

However, when the CCP occupied Nanjing, she became an immediate victim of her success. History reveals her fate was the same as countless others; the CCP savaged and turned on her.

According to the book The Biography of Chen Xiuliang, Chen Xiuliang worked as a deep cover spy operative for the CCP; she infiltrated the critical departments of the ROC, betrayed ROC officials, and for her efforts, she was betrayed and tortured by the CCP for 22 years.

She was tasked with anti-government espionage

Chen Xiuliang, born in Ningbo, Zhejiang, in 1907, was admitted to the Zhejiang Provincial Girls High School at 18. Here, she came into contact with CCP’s propaganda publications that influenced her thoughts.

After graduation, she served as secretary to Xiang Jingyu, the leader of the early women’s movement, and later joined the CCP in 1927. The same year, Chen traveled to study at Sun Yat-sen University in Moscow. After returning to China, she was deployed as a spy in Shanghai.

Following the end of the Anti-Japanese War in 1945, the government of ROC returned to Nanjing from Chongqing, the provisional capital. Soon, however, civil war broke out.

After taking office, she enforced the division of labor according to the CCP’s Sixteen-Character Policy for white area work: concealed and capable, long-term ambush, accumulation of strength, and waiting for an opportunity.

As the spy chief in Nanjing, Chen Xiuliang had a relentless work ethic. She successively planted more than 40 spies in the police forces, the ROC Security Bureau and Ministry of National Defense, the U.S. Army Advisory Group, and the U.S.Army-Nationalist Revolutionary Army (NRA) Joint Logistics Headquarters. As a result, she acquired a significant amount of logistical information.

Some examples of her spying prowess were obtaining the communication passwords when the NRA blocked the Yangtze River, a list of ROC spies and their activities, and the NRA underground radio station and its passwords.

She also obtained information on NRA reservists; the Nanjing city defense map, including important information on the strength and equipment of the police force; the location of the NRA frontline headquarters; the list of ROC officials; and NRA artillery and troop positions in the Pukou area.

In September 1948, Chen Xiuliang received a new task to instigate treason in the NRA.

Her first target was Yu Bo, a pilot of the Eighth Brigade of the Air Force. On December 16, 1948, Yu Bo delivered a B-24 bomber to the People’s Liberation Army (PLA) from the Nanjing Dajiaochang military airport.

Her second target was Deng Zhaoxiang, captain of the Navy’s most advanced cruiser Chongqing. On February 25, 1949, Deng Zhaoxiang commanded the Chongqing to sail out of the Yangtze River Estuary Channel and head north to Yantai Port, Shandong, which the PLA controlled.

The third target was Wang Yanqing, Lieutenant General of the 97th Division of the Capital Guard. Chen Xiuliang went alone to meet Wang Yanqing. After talking for more than 10 minutes, she convinced Wang Yanqing to join the PLA.

Due to Chen Xiuliang’s extensive work in Nanjing, the PLA successfully occupied one strategic location after another in the periphery of Nanjing City. As a result, on April 24, 1949, the PLA crossed the Yangtze River and occupied Nanjing without significant resistance.

Based on common logic, Chen Xiuliang should have been acclaimed as a great hero of the CCP. Still, just as the PLA was about to cross the Yangtze River, Mao Zedong formulated a new 16-Character Policy for the NUP:  de-escalation arrangement, control use, and phase-out.

Many NUP members who toiled and spied with Chen Xiuliang for the CCP were betrayed and purged. In subsequent political campaigns, almost all of the nearly 2,000 members of the NUP suffered brutal attacks.

After Mao Zedong launched the anti-rightist movement in 1957, Chen Xiuliang was included in the first batch of targets in Zhejiang Province to be named and criticized, while Sha Wenhan became the highest-ranking “rightist” in the CCP. As a result, he was dismissed from all positions and later expelled from the CCP in January 1964. Sha Wenhan passed away with remorse.

On February 25, 1958, Chen Xiuliang was accused of being “anti-Party” and “anti-Soviet” and an extreme rightist. As a result, she was expelled from the CCP, removed from all positions, demoted six grades, and sent to rural Jiaxing for reform through labor.

Chen Xiuliang was again criticized, beaten, and tortured during the 10-year Cultural Revolution. She was tied, hung up, and paraded in the street with her head shaved — she almost died.

In the almost 20 years from her rehabilitation in 1979 until she died in 1998, Chen Xiuliang emphasized doing two things; clear her husband’s name and vindicate those in the NUP who had been purged.

We all choose the consequences of our actions

Until 1949, Chen Xiulian toiled with enthusiasm for the CCP. She may have started in her youth with good intentions. However, after 1949, she was treated as a “bad person” by the CCP, purged, and forced to undergo reform through labor for 22 years.

In hindsight, Chen Xiuliang aided the CCP in unscrupulously subverting the legitimate government of the Chinese people. What kind of regime was established after the fall of the ROC?

The CCP committed genocide against its people while plundering their ancient heritage and culture. Chen Xiuliang aided these crimes by participating in the subversion and sabotage of the ROC. She spent the latter part of her life trying to “vindicate” her husband and those in the NUP. But, in reality, she was a witness to her own crimes.

When the CCP assumed control, the first targets on their list to purge, destroy, or execute were those who helped them overthrow the ROC. This is because they knew those individuals were skilled at sabotage and counter-intelligence and could not be trusted not to do the same to the CCP.

“A people that elect corrupt politicians, imposters, thieves, and traitors are not victims, but accomplices.” — George Orwell