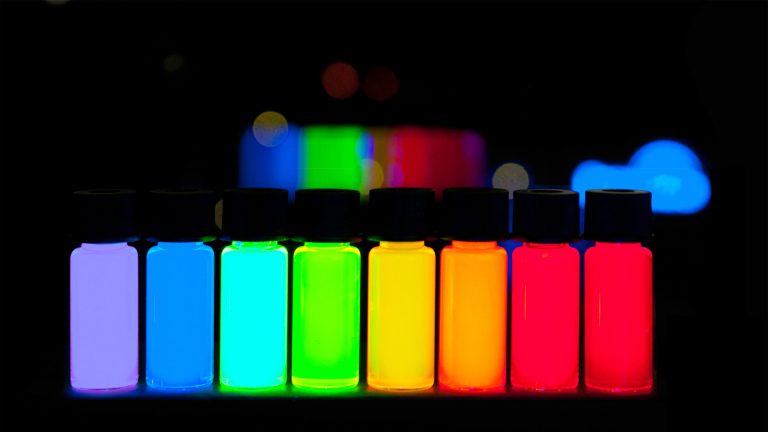 Tiny crystals, known as quantum dots, have enabled an international team to achieve a quantum efficiency exceeding 100 percent in the photocurrent generated in a hybrid inorganic-organic semiconductor. Perovskites are exciting semiconductors for light-harvesting applications and have already shown some impressive performances in solar cells. But improvements in photo-conversion efficiency are necessary to take this technology to a broader market.

Light comes in packets of energy known as photons. When a semiconductor absorbs a photon, the electromagnetic energy is transferred to a negatively charged electron and its positively charged counterpart, known as a hole. An electric field can sweep these particles in opposite directions, thereby allowing a current to flow. This is the basic operation of a solar cell. It might sound simple, but optimizing the quantum efficiency, or getting as many electron-hole pairs from the incoming photons as possible, has been a long-standing goal.

One cause of inefficiency is that if the photon has more energy than is needed to create the electron-hole pair, the excess energy is usually lost as heat. But nanomaterials offer a solution. Small particles, such as nanocrystals or quantum dots, can convert high-energy photons into more than one electron-hole pair. Jun Yin and Omar Mohammed from KAUST worked with Yifan Chen and Mingjie Li from Hong Kong Polytechnic University and their colleagues to demonstrate this so-called multiple exciton generation (MEG) in nanocrystals of tin-lead halide perovskite. Yin said:

“We demonstrated a photocurrent quantum efficiency exceeding 100 percent by harnessing MEG in the perovskite nanocrystal devices.”

In the past, MEG has been observed in perovskite nanocrystals with a large bandgap: that is, those semiconductors that can only absorb high-energy photons. Narrower-bandgap materials present a greater challenge because the excited electron-hole pairs relax, or cool, too fast for them to be extracted in a functioning solar cell device. Yin said:

“Efficient MEG in narrower-bandgap perovskite nanocrystals and verification of their inherent MEG in practical optical devices have not been reported.”

Chen, Yin, and the team synthesized a semiconducting material composed of tiny particles of formamidinium tin–lead iodide perovskite — made using small amounts of tin — embedded in tin-free FAPbI3. The team believe that the introduction of tin helps to slow the “cooling,” Yin concluded:

“We will be able to further optimize the perovskite nanocrystal by altering its composition to obtain higher MEG performance and improved the light-power conversion.”

Provided by King Abdullah University of Science and Technology [Note: Materials may be edited for content and length.]