Why Did the Ancients Build the World’s Largest Buddha Statue in Sichuan? Part 1 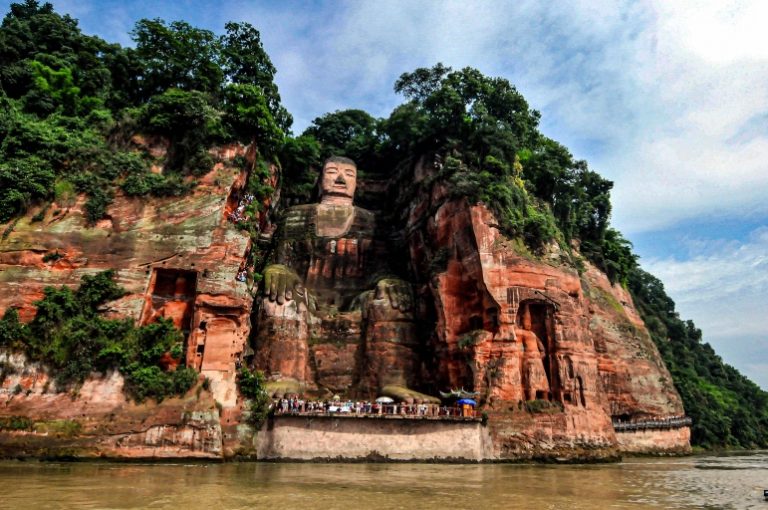 At the confluence of the Dadu, Qingyi, and Min rivers in Sichuan Province, the world’s largest stone-carved Buddha statue is 71 meters (233 ft) high. This gigantic Buddha statue is the famous Leshan Giant Buddha, also known as the Giant Stone Maitreya Buddha of Lingyun Temple in Jiazhou (present-day Leshan County).

The Leshan Giant Buddha statue is more than 160 kilometers (99.4 miles) north of Chengdu. Carved into the side of Lingyun Mountain, the colossal statue is over 1,300 years old. The site attracts millions of people annually, including Buddhist pilgrims, making it a sacred destination and an ancient wonder.

The seated statue was constructed in the first year of the Kaiyuan era of the Tang Dynasty (A.D. 713). The project took more than 90 years to complete.

It faces the sacred Mount Emei with the confluence of the three rivers flowing below its feet. It depicts a stout, smiling monk, calmly sitting, resting his hands upon his knees with heavy-lidded eyes gazing across the waterway. The statue is believed to be Maitreya, a Buddha and disciple of Sakyamuni, symbolizing brightness and happiness.

Maitreya was especially popular between the 4th and 7th centuries. Today, images of him can still be found in many Buddhist temples throughout China, and the Leshan Giant Buddha statue is considered the most inspiring.

The surrounding landscape reveals a secret

On May 11, 1989, Pan Hongzhong, a farmer from Chonghe Township, Shunde County, Guangdong Province, visited Leshan County and the Leshan Giant Buddha. While there, he photographed a panoramic image of the Lingyun, Wuyu, and Guicheng mountains.

After returning home, he noticed that the mountain in the photo looked like “a healthy man lying on his back. He wrote of the discovery and published it in Sichuan Cultural Relics in 1990.

This Giant Sleeping Buddha has complete limbs and a well-proportioned posture. With its face up to the sky, it looks kindly and dignified.

The Giant Sleeping Buddha: A miracle of nature

The Giant Sleeping Buddha lies on the East Bank of the Mian Jiang River for about 1,300 meters (4,265 ft). The best way to view it is by boat on the river.

Its head is composed of Wuyou Mountain. The stone, green bamboo, green shade, mountain path, pavilions, and mountains temples are presented as the hair bun, eyelashes, nose bridge, lips, and mandible of the Giant Sleeping Buddha.

The body is composed of Lingyun Mountain, and the nine peaks on the mountain are connected, just like the broad chest, round waist, and legs of the Giant Sleeping Buddha; its upturned feet are part of Guicheng Mountain.

The whole posture of the Giant Sleeping Buddha is very lifelike and natural, just like the creation of the heavenly palace, without any trace of human activity.

Please watch this video of the Leshan Giant Buddha statue:

The legend of the Leshan Giant Buddha

Legend has it that in the early years of the Tang Dynasty, there was an old monk named Haitong from Lingyun Temple on Lingyun Mountain. At that time, the confluence of the Dadu, Qingyi, and Min rivers at the base of Lingyun Mountain was deep and turbulent, often engulfing boats and their crews.

Haitong thought that the confluence of the three rivers was so turbulent that there must be a demon under the surface. He felt that if a Buddha statue were carved on this rock, with the power of the Bodhisattva, it would surely be able to subdue the demon so that the passing boats would no longer be harmed.

So he invited two famous stonemasons, Shi Cheng and Shi Xu, to discuss the matter of carving a Buddha statue.

Shi Xu thought that many people travel here to worship Buddha every year, and if he carved many Buddha statues on the mountain rock, his reputation would spread. Considering this, he said: “The demon is very fierce. I think it can only be suppressed by building a thousand Buddha statues.”

At this time, the old monk saw that Shi Cheng was silently standing beside him, so he asked him: “Shi Cheng, what do you think?” Shi Cheng said calmly, “I think I will carve a single statue as tall as this rock.

When the old monk saw the two arguing and unwilling to give way, he told them: “The two of you don’t have to fight, one will carve one large Buddha, and one carve a thousand Buddhas.”

The decision is made, and the work begins

After the old monk had spoken, he went out to seek alms. After that, Shi Cheng and Shi Xu started to choose rock compositions and carve their Buddha statues.

Shi Xu chose red sandstone from along the river. It has a loose texture and is softer than granite, which makes it a good material for sculpturing. However, it is susceptible to erosion and weathering.

He and his apprentices carved Sakyamuni’s enlightenment, Boddhisatva Guanyin, 18 Arhats subduing dragons and tigers, and Bodhisattva Samantabhadra guiding the way for the lost.

Only the chisels’ sound and the flakes flying were heard and seen as Shi Xu and his apprentices carved one statue after another. Finally, after two years of continuous work, they were finished.