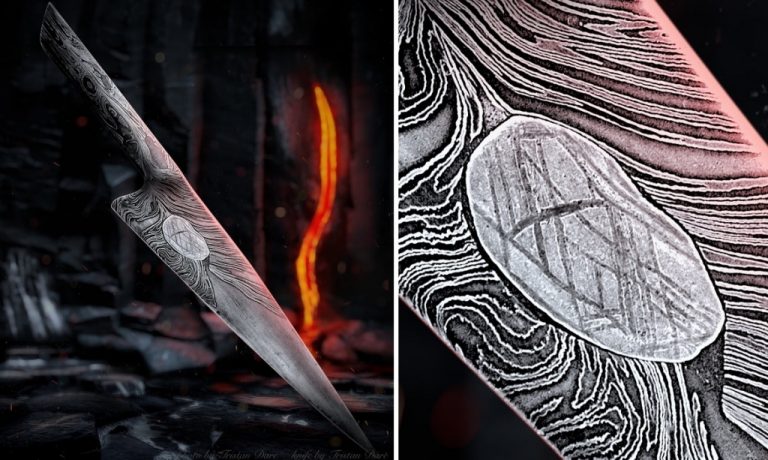 Bladesmiths are fascinating. From the fictional Valyrian steel to the real-life 1,500-year-old pre-Viking sword found by a Swedish 8-year-old, you have to appreciate the ornate craftsmanship that goes into it. And now enter the 19-year-old bladesmith Tristan Dare and his meteorite knife.

Dare, who lives in the state of Idaho in the U.S., makes elaborate knife designs from unconventional materials. His latest knife, “Fire in the Sky,” is a work of art and craftsmanship. He made the meteorite knife by combining Damascus steel and a 4.5 billion-year-old meteorite.

What Is a meteorite knife?

Can you make a blade out of a meteorite? It seems like something from a fantasy book, but if you love history, you’ve probably heard about the mysterious Jim Bowie meteorite knife. Bowie was a legendary 19th-century knife fighter who became famous after a duel where he killed three assassins in Texas. And following his death at the battle of the Alamo, his meteorite knife, forged by Jack Black, achieved legendary status.

Today, Tristan Dare is the modern Jack Black. He makes his meteorite knives using modern tech, experience, and a touch of artistry.

His imagination comes from his love of history. And he says his primary goal is “turning what may not be appreciated in its natural form… to create something that can be appreciated in more ways for generations to come.”

Tristan’s passion caused him to look for meteorites, ivory, and rare wood to use in his blades. For instance, the Muonionalusta meteorite used in the “Fire in the Sky” meteorite knife was imported from Germany. This metal comes from Damascus steel, the forged steel of the blades of swords smithed in the Near East, and the meteorite that impacted Earth 1 million years ago on the border between Finland and Sweden. This meteorite is 4.5 billion years old and is one of the most ancient meteorites on Earth.

How Tristan became a bladesmith

Tristan is not new to craftsmanship. He started with woodworking before moving to metalwork. His grandfather, a carpenter, introduced him to woodworking when he was 11. After learning carpentry, he even won a few contests.

But his curiosity didn’t stop there. Tristan moved to metalwork because he wanted to challenge himself and create unique works. And since then, he has pushed himself to create better pieces and hone his skills. The self-taught bladesmith may have learned through trial and error, but today he makes some of the most ornate knives on earth.

“My favorite part of the bladesmithing process,” Tristan says, “is when the blade is finally almost done, it’s been forged, polished, and the only thing left to do is reveal the Damascus pattern.”

What is a Muonionalusta meteorite?

Muonionalusta is one of the rarest meteorites on Earth. Only about 40 of its fragments are scattered on the planet.

This meteorite is among a family of meteorites called octahedrite. And octahedrite has distinctive patterns within its crystalline structure. These structures form unique eight-sided molecular shapes that are mathematically proportional. Unfortunately, as Dare says, this natural pattern is lost when heated. But the good thing is that he has found a way to retain these mathematically symmetrical shapes.

“This pattern is seen in all octahedrite blades, and to my knowledge today, less than ten people in the world have ever been able to achieve this,” Tristan said.

Last year, Tristan posted a YouTube video showing his bladesmithing process. He shows how he works meteorites with Damascus steel. Damascus knives are known for their wavy patterns, sleek look, and aesthetically pleasing designs. It’s also valuable because it is rigid, flexible, and far superior to iron.

How much does a meteorite knife cost?

Dare did not reveal how much he paid for the Muonionalusta meteorite, but he says he spent “thousands.” As mentioned, he also intends to make his knives a collector’s item to be passed down from generation to generation.

So he will probably auction “Fire in the Sky” to the highest bidder at some later date. But for now, the meteorite knife price is unknown.

Tristan Dare’s story is not only a fantastic feat, but it’s also inspirational. At 19, he rivals the best bladesmiths and is set to become better as he perfects his skill. His meteorite knives have become sensational — and for good reason.

So what magic will he create next? The world can only wait.