Missing Carbon Monoxide Was Hiding in the Ice 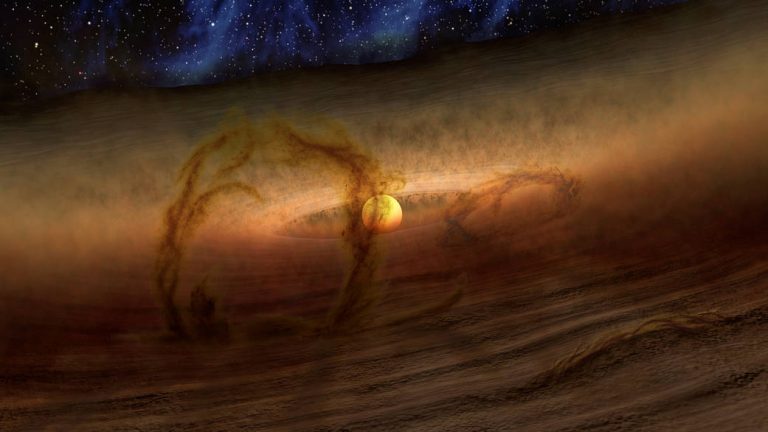 Magnetic loops carry gas and dust above disks of planet-forming material circling stars, as shown in this artist's conception. These loops give off extra heat, which NASA's Spitzer Space Telescope detects as infrared light. The colors in this illustration show what an alien observer with eyes sensitive to both visible light and infrared wavelengths might see. (Image: JPL-Caltech via NASA)

Astronomers frequently observe carbon monoxide in planetary nurseries. The compound is ultra-bright and extremely common in protoplanetary disks — regions of dust and gas where planets form around young stars — making it a prime target for scientists.

But for the last decade or so, something hasn’t been adding up when it comes to carbon monoxide observations, says Diana Powell, a NASA Hubble Fellow at the Center for Astrophysics | Harvard & Smithsonian. A huge chunk of carbon monoxide is missing in all observations of disks if astronomers’ current predictions of its abundance are correct. Now, a new model — validated by observations with ALMA — has solved the mystery: carbon monoxide has been hiding in ice formations within the disks. The findings are described today in the journal Nature Astronomy, Powell who led the study said:

“This may be one of the biggest unsolved problems in planet-forming disks. Depending on the system observed, carbon monoxide is three to 100 times less than it should be; it’s off by a really huge amount.”

And carbon monoxide inaccuracies could have huge implications for the field of astrochemistry, Powell explained:

“Carbon monoxide is essentially used to trace everything we know about disks — like mass, composition and temperature. This could mean many of our results for disks have been biased and uncertain because we don’t understand the compound well enough.”

Intrigued by the mystery, Powell put on her detective hat and leaned on her expertise in the physics behind phase changes — when matter morphs from one state to another, like a gas changing into a solid. On a hunch, Powell made alterations to an astrophysical model that’s currently used to study clouds on exoplanets, or planets beyond our solar system, she said:

“What’s really special about this model is that it has detailed physics for how ice forms on particles. So how ice nucleates onto small particles and then how it condenses. The model carefully tracks where ice is, on what particle it’s located on, how big the particles are, how small they are and then how they move around.”

Powell applied the adapted model to planetary disks, hoping to generate an in-depth understanding of how carbon monoxide evolves over time in planetary nurseries. To test the model’s validity, Powell then compared its output to real ALMA observations of carbon monoxide in four well-studied disks — TW Hya, HD 163296, DM Tau, and IM Lup. The results and models worked really well, Powell says. The new model lined up with each of the observations, showing that the four disks weren’t actually missing carbon monoxide at all — it had just morphed into ice, which is currently undetectable with a telescope.

“This changes how we thought ice and gas were distributed in disks. It also shows that detailed modelling like this is important to understand the fundamentals of these environments.”

Powell hopes her model can be further validated using observations with NASA’s Webb Telescope — which may be powerful enough to finally detect ice in disks, but that remains to be seen. Powell, who loves phase changes and the complicated processes behind them, says she is in awe of their influence. “Small-scale ice formation physics influences disk formation and evolution — now that’s really cool.”

Provided by Harvard-Smithsonian Center for Astrophysics [Note: Materials may be edited for content and length.]