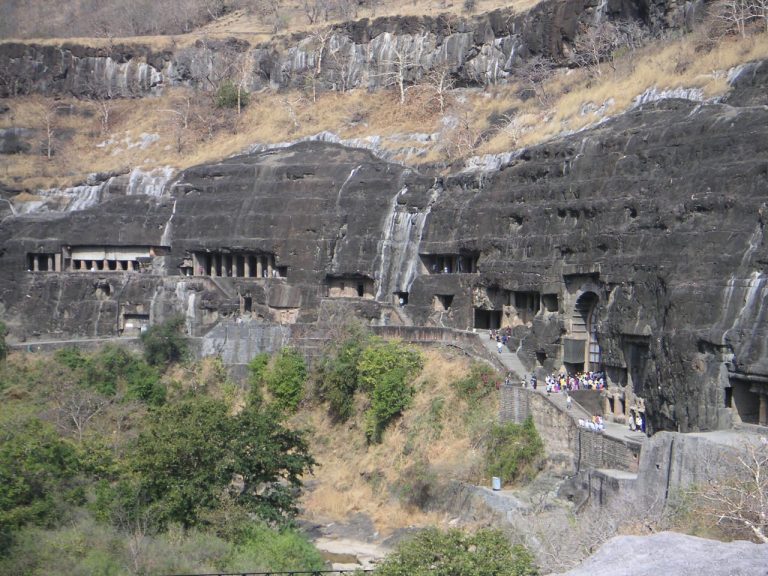 The Ajanta Caves in the Aurangabad district of Maharashtra state in India. (Image: via Wikipedia)

The Ajanta Caves are a stunning treasure of art and religion located 200 miles from the busy streets of Mumbai, tucked away in the highlands of Northwest India.

The Ajanta Caves are approximately 30 rock-cut Buddhist cave monuments dating from the 2nd century BCE to about 480 CE in the Aurangabad District of Maharashtra in India.

The caves include paintings and rock-cut sculptures described as among the finest surviving examples of ancient Indian art, particularly expressive paintings that present emotions through gesture, pose, and form. They are universally regarded as masterpieces of Buddhist religious art.

This article explores the beautiful caves of Ajanta and the art that continues to inspire people through the years.

The 30 caverns, renowned for their amazingly detailed paintings and early Buddhist temples, are situated on a 76-meter-high horseshoe-shaped cliff that overlooks the Waghora River.

The development of Ajanta Caves covers centuries because they were created in many historical periods. Therefore, building these caverns occurred over time, since constructing such a significant landmark in Buddhist history would’ve taken many years.

The 30 caverns were built in two phases, the first starting around the 2nd century BCE and the second occurring from 400 to 650 CE, according to older accounts, or in a brief period of 460-480 CE, according to later scholarship.

The site is a protected monument in the care of the Archaeological Survey of India, and since 1983, the Ajanta Caves have been a UNESCO World Heritage Site.

Cave paintings are parietal art (which includes petroglyphs or engravings) found on the wall or ceilings of caves, and a unique feature of the Ajanta Caves is their murals. A few paintings are from the Satvahana era, while others are from the Gupta era or later.

The numerous identifying elements of the Ajanta Caves’ paintings make them easily recognizable, and the artwork from cave one’s Jataka Tales is an excellent example.

Additionally, the ceiling murals are well executed. For example, the Indian Ministry of Tourism chose a specific panel from a ceiling artwork of an elephant trying to run amid flowers as its emblem.

Some strokes are rhythmic and defined. Additionally, there are some early-stage artworks in caves 9 and 10. The depictions of the Buddhas may be used to examine the second stage of the painting in these caves.

Jatakas Tales and the life of Buddha are among the subjects of these paintings. In addition, the range of skin tones, such as brown, yellow, and yellowish brown, which emphasize the many ethnicities in the community, is a very intriguing insight. Some paintings, such as Vidhurpandita Jataka, Mahajanaka Jataka, and Simhala Avadana, cover the entire surface of the caverns.

The geology and construction of the caves

The basalt collected in the shape of volcanic rocks was used to construct the caverns. These rocks were collected as a result of ancient volcanic eruptions. As fractures appeared during the procedure, the artisans carefully planned their carving of the stones.

Generally, the artisans sculpted pillars, roofs, and idols out of the rocks. The architecture of the cave complex is distinct because it displays the constantly developing skill of the artisans. They were trained in an already well-established architectural style, but were not experienced with rock-cut material.

So the Ajanta Caves reflect a perfect combination of the amazing modern constructions and the basaltic medium’s unique qualities and possibilities in all its glory.

The artworks and rock-cut sculptures found in the caves are among the earliest examples of Indian art that have survived, especially the graphic images that convey feelings through movement, position, and shape.

Buddhist and Hindu rock caves can be found throughout western India, making it easy for anybody to follow the development of Indian art and religion. But unfortunately, other artifacts from that era have since disappeared.

It is significant because, at the same time, as Mahayana Buddhism was gaining popularity, representations of the Buddha and other supporting characters known as bodhisattvas emerged in Buddhist art.

Early Buddhist artistry, patronage, and architectural styles that influenced the spread of Buddhism and Buddhist symbolism throughout Asia can be traced to the Ajanta Caves.