Sima Guang: Assessing the Abilities and Virtues of People 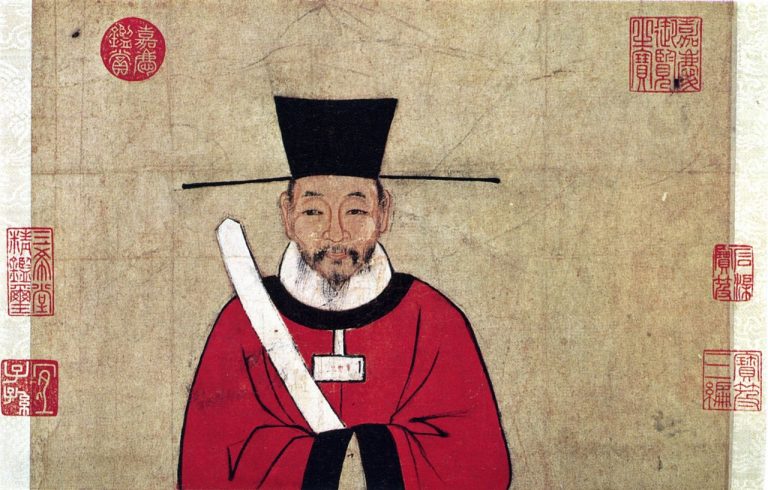 Contemporary painting of Sima Guang of the Northern Song Dynasty. Hand scroll, color on paper. The painting is located in the National Palace Museum, Taipei. (Image: via Public Domain)

Sima Guang (1019-1086), courtesy name Junshi, was a native of Shanxi Xia County, a litterateur, and a historian in the Northern Song Dynasty. He consecutively served as an official across four emperors, taking charge of the compilation of the first Chinese general history, History as a Mirror. He was a paradigm of Confucian education and won public admiration.

Based on abilities and virtues, Sima Guang roughly divided people into four types. A “sage” has both talent and integrity, a “fool” has neither talent nor virtue, a “gentleman” has virtue over talent, and a “mean man” has talent over goodness. Sima Guang also suggested that we should trust and value sages and gentlemen when selecting and employing people. We should choose fools rather than mean persons if there were no saints and gentlemen.

Sima Guang believed that a gentleman could do good with his ability, while a mean person would use it for evil. A fool was so foolish that he did not have enough intellect to do evil. But a cunning person was capable enough to realize slyness and courageous enough to commit violence. Like giving wings to a tiger, he was incomparably dangerous!

Sima Guang further illustrated that a virtuous person always earned people’s respect, and all loved an intelligent person. However, being respected was prone to alienating oneself from the public, while being loved was more approachable to others. So inspectors were mostly blinded by people’s talent and ignored their virtue.

King Zhou of the Shang Dynasty

Historically, most of the country’s incapable rulers, treacherous court officials, and prodigal sons in families were more talented, but they lacked character, and many even caused the ruin of states and families. In history, notorious tyrants, such as King Zhou of Shang, King You of Zhou, and Emperor Yang of Sui, were all nasty persons who had the ability, but no morality, and brought disasters to the country.

King Zhou of the Shang Dynasty was especially clever, knowledgeable, courageous, and could fight beasts with his bare hands, but he whitewashed his mistakes, refused admonitions, and scorned divinities. He always blew his own horn and thought everyone was inferior to him.

He once cut open a woman’s abdomen to observe her fetus, ripped open the bone of a farmer’s feet to examine his marrow, and removed his uncle’s heart alive. As a result, all feudal princes and civilians renounced him. Finally, the Shang Dynasty was eliminated by King Wu of Zhou, and King Zhou of Shang committed suicide by self-immolation, being ridiculed by the world.