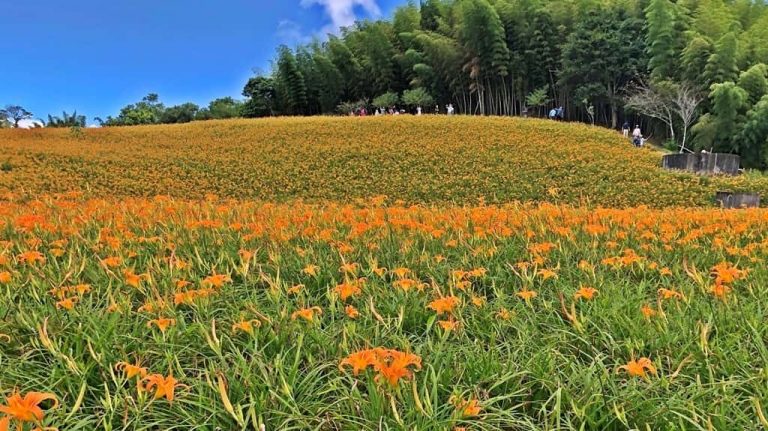 Chike Mountain (赤柯山) is located at the top of the Coastal Mountain Range in eastern Taiwan’s Hualien County. It covers an area of ​​300 hectares (741 acres) at elevations of between 800 meters (2,624 feet) and 1,200 meters (3,937 feet) above sea level. The mountainous terrace is one of the three most famous tourist attractions featuring breathtaking golden daylily fields in Taiwan.

Please watch the following video for beautiful images of the golden daylily flowers at Chike Mountain.

The daylily is a nutrient and iron-rich perennial plant that blooms every year from July to September. It is commonly called the “golden needle flower” because of the shape and color of the bud. In addition, the daylily is nicknamed “mother’s flower” and “forgetful grass,” symbolizing the love between a mother and child.

The daylily’s scientific name is Hemerocallis, a combination of Greek words meaning “beauty” and” day,” respectively. It symbolizes that the beautiful flower lasts only one day. Therefore, the daylily is often called “One Day Flower.”

Although its flower only lasts one day, the plant blooms for several weeks, as each flower stem has about 20 flower buds, which bloom every day.

The history of Chike Mountain

Chike Mountain was named after the abundance of Chike trees planted in this area. The Chike tree is called Mori Oak, Quercus morii Hayata, or Red Bark Oak. It is a large, evergreen broad-leaved tree with a rugged trunk. During the Japanese colonial rule (1895-1945), this mountain was especially famous for the Chike tree, as it was exported to Japan for making handgun grips.

Chike Mountain didn’t grow daylilies until the early 1960s, when some farmers relocated to this terrace and other places in Hualien and Taitung in the wake of a tragic flood that devastated their farms in central and southwestern Taiwan in 1959.

At first, these farmers grew corn, peanuts, sweet potatoes, and other crops. But shortly, they realized that the fertile land on this terrace was also perfect for cultivating daylilies, which used to grow in Ali Mountain (also known as Alishan) in southern Taiwan’s Chiayi County.

They thus started to employ the techniques they learned from Alishan to plant daylilies in the highland regions in Hualien and Taitung, including Chike Mountain.

At first, daylily cultivation was quite profitable, especially during the 1960s and 1970s. Nevertheless, it was no longer profitable starting in the 1990s due to the rise in labor costs and the importation of lower-priced daylilies from China.

Some farmers devised the novel idea of converting agricultural fields into agritourism sites. To this end, they purposely let daylilies bloom on the meadows without harvesting their buds. Surprisingly, the beautiful daylily flowers were highly appreciated by many. They thus decided to promote agritourism for the daylily at Chike Mountain in conjunction with local farmers’ associations. The campaign eventually turned out to be quite successful.

Since then, Chike Mountain and Lioushidan Mountain (六十石山) in Hualien County, and Taimali Mountain (太麻里) in Taitung County have become the three most famous destinations for daylily tourism in Taiwan.

“The three pyrogenetic rocks in the daylily fields,” “the thousand-ton stone turtle,” and “Wang Family Historic Residence” are the so-called “Three Views of Chike.” On top of these, there are two dozen daylily farms at Chike Mountain, and among them are Lin’s Family Garden, Wang’s Family Farm, Little Switzerland Farm, etc.

With an area of over 3 hectares (7.4 acres), Lin’s Family Garden is picturesquely situated on the slope of a hill. Many eye-catching art installations are scattered around the farm, including a colorful hot air balloon, a moon-shaped swing, a massive colorful hollow metal photo frame, images of fairy tale characters, and an enormous “LOVE” installation.

Lin’s Family Garden is not only an excellent destination for taking in a fantastic sea of golden needle flowers and other plants but also a good location for camping and tasting daylily cuisine.

This farm is one of Chike Mountain’s most popular tourist attractions. Upon arrival, visitors will be enthralled with a kaleidoscope of Purple Crow butterflies (Euploea spp. 紫斑蝶). Also, some interesting cucumbers are hanging on wire trellises near the entrance, which is a hot photography spot.

Another distinctive feature of this farm is its Minnan-style traditional house surrounded by beautiful golden daylilies. This 50-year-old half-wooden house was built with Chike tree wood and other local wood. It is the only one of its kind standing at Chike Mountain.

Moreover, daylily flowers are dried in the sun on the ground in front of the old house and on its rooftop during the blooming season.

Situated at about 1,000 meters (3,280 feet), this farm is the highest on Chike Mountain. The farm is surrounded by a daylily field, occupying 4 hectares (9.8 acres). It is a great location to appreciate the vast expanse of golden needle flowers on the terrace.

Another breathtaking view that always amazes visitors on the farm is that a sea of golden daylily flowers lies across a slope in front of a lush bamboo forest. There are also some platforms with iron rails extruding into the daylily fields to allow visitors to enjoy the beautiful flowers and take pictures.

Chike Mountain is a fantastic tourist destination where visitors can explore the beauty of nature and enjoy a relaxing vacation at the top of the Coastal Mountain Range in eastern Taiwan.