The Interesting Legacy of ‘Portable Soup’ 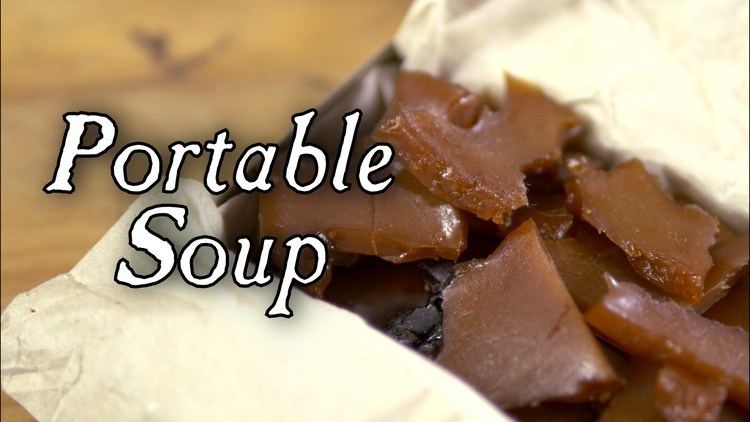 Portable soup was a kind of dehydrated food used in the 18th and 19th centuries. It was a precursor of the later meat extract and bouillon cubes, and of industrially dehydrated food. (Image: via Alchetron)

Some centuries ago, European explorers used to carry provisions to last for months as they had to navigate uncharted waters with little or no access to fresh water and food supplies. This often included portable soup. For example, when Captain James Cook set out for a voyage on the HMS Endeavor in 1768, he ensured the ship was loaded with enough food and provisions that would last for approx 18 months. That included fresh water, goats, poultry, pigs, and an ample supply of portable soup.

Portable soup was a kind of dehydrated food used in the 18th and 19th centuries, originating from Great Britain. It was a precursor of meat extract, bouillon cubes, and industrially dehydrated instant food. It is also known as pocket soup or veal glue.

It is a partially dehydrated broth and a solid counterpart of glace de viande (meat glaze) in French cuisine. It was long a staple of British seamen, military, and explorers, as it would keep for many months. In this context, it was considered a filling and nutritious dish.

The book, A Culinary History of Missouri: Foodways and Iconic Dishes of the Show-Me State describes culinary items from the past. Co-author Suzanne Corbett says: “You then dry it out further, turning it into plastic. When ready, you can add water, and it becomes soup or a base for other things.” As such, it can be kept in dry locations for a considerable time.

The portable soup was easy to store and consume, and it was healthy as well. However, the soup was not easy to make. The method involving boiling meat and removing meat from the thickened soup was tedious and could take up to half a day to make one large pot.

Food specialists think it is not as challenging to prepare today as people can use many modern cooking devices. Noted food writer Linda Duffin says: “When you make a broth with a bone, you cook it long enough. What happens is all the collagen that’s in the bone marrow leeches out into the flavored liquid. All that collagen is gelatin. You’ve probably seen this if you put a roasted chicken in the fridge, and the next day you take it out, and there’s jellied juice around it. That’s what it is.”

A brief history of portable soup

Portable soup was a staple among travelers in the 1700s, but it is hard to fathom its origins. Noted author Janet Clarkson writes in her book Soup: A Global History: “There are many ridiculous claims as to the ‘inventor’ of portable soup, but it is most likely that it developed simultaneously in as many places as there are pots of broth to boil almost dry.”

A 15th-century English agricultural writer Sir Hugh Plat may be the first to note down the recipe. By the 1600s, the popularity of portable soup was widespread. Antoine Furetière, a French scholar, wrote about it. Ann Blencowe, a British recipe compiler, included it in her 1694 cookbook.

In 1747, Hannah Glasse, a famous English culinary writer, tried to refine the recipe for mass adoption. She enhanced the original recipe with condiments and spices like thyme, onions, marjoram, cloves, mace, and pepper.

Elizabeth Dubois, an 18th-century tavern keeper in London, made the recipe immensely popular by taking out advertisements. She even secured a contract to make the soup for the Royal Navy.

In the 1800s, the popularity and demand for portable soup declined. A Royal Navy senior medical official Sir Gilbert Blane wrote in an unflattering tone about the supposed efficacy of the soup in thwarting scurvy. However, Nicolas Appert, a French chef, mastered the method of airtight food preservation.

By the mid-1800s, canned foods became popular among sailors. Portable soup survived in the recipe books of the 19th century, nevertheless. Its legacy is alive today at the National Maritime Museum in Greenwich, UK.