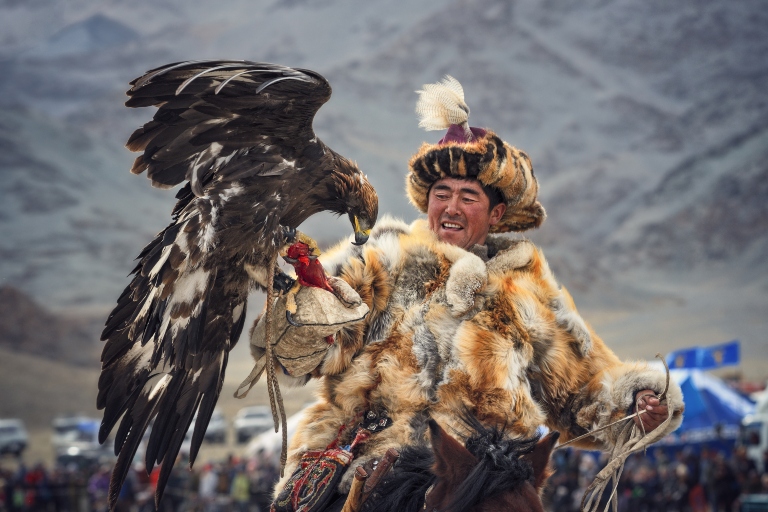 Deep in the Altai Mountains, in the far reaches of Western Mongolia, the last eagle keepers keep eagle hunting alive. Every winter, nomads from the Altai region venture into the high mountains to search for young eaglets, which they take home to train.

Daniel Kordan, a Russian photographer, shared this elusive, but enchanting, 1,000-year-old practice with the world. His work, a blend of illustrative portraiture and fantastic landscape, shows the bond between the eagle tamers and their eagles.

Eagle keeping is a dying tradition

This eagle-keeping tradition that the Kazakh nomads have kept alive for centuries is said to have originated from the nomadic Khitans in northern Manchuria around A.D. 940.

In the past, this tradition was passed from father to son. But after maintaining the practice for hundreds of years, falconers or eagle keepers are a dying breed. Today, only about 300 eagle keepers are among the minority Kazakh nomads in the Altai region. And out of this, there are about 50 to 60 “true” falconers. But each year, the subzero winter temperatures claim a few more.

Unfortunately, most young people shun this great tradition as they increasingly migrate to search for greener pastures in significant cities.

In an interview, Kordan said: “it’s an elusive culture that is almost extinct these days. But these people try to keep the tradition and pass it on for generations.”

The fascinating world of eagle keepers

Most falconers prefer the golden eagles as their companions. It’s an extraordinary feat, given eagles are notoriously tricky to manage and train. But these fantastic people have perfected a way of teaching the eaglets and using them for hunting rabbits and foxes for food and fur.

This tradition is known to the Kazakh nomads as Berkutchi. Initially, only noblemen could become eagle hunters, but it slowly became a rite of passage for young men in the region.

“I am fascinated by nomad culture,” said Kordan, who leads photography expeditions and workshops. And after this expedition to Mongolia, his respect for the people and their traditions soared.

“All families are linked,” he added. And through these links, he got a more intimate connection with nomad families. He used local guides who introduced him to the local eagle keepers.

As you can imagine, people who have kept such traditions alive often live in isolation. That way, it’s easier to keep their practices from generation to generation. That’s why it wasn’t easy for Kordan to interact intimately with the nomads without a proper introduction.

The locals hold the Berkutchi Festival every September to celebrate the culture of the Turkic group, attracting thousands of tourists.

Galloping through the mountains on horseback, the Kazakh nomads form a glorious sight as they show their mastery — with their eagles perched on their hands. From his pictures, it’s easy to notice the majestic power and ability of the tamers and their eagles. But the bond and pride shared between the handlers and their eagles is more intriguing. The eagles fly through the skies at speeds of up to 200 mph as they soar toward their handlers.

Better yet, they have awards. For example, there is an award for Best Turned Out Eagle and Owner, Best Eagle at Hunting Prey, and Best Eagle at Locating Its Owner From a Distance.

Other activities at the annual festival include archery, horse racing, and a goatskin tug of war on horseback.

Eagle hunting: happiness in the face of adversity

Managing and training an eaglet can take up to a decade. And even youngsters starting from 13 years can keep their own. But typically, they release potent predators to the wild after about 10 years.

Kordan was even more surprised by the joy the nomads enthused despite their difficult life and climate.

When asked about the most astounding thing he learned about eagle keepers, he answered: “That people are so happy with this life, no matter how hard it is.”

He hopes his work will steer people toward cultural preservation and “make our lives better and a life full of intent.”