How Birds Migrate by Following Their Inner Compass 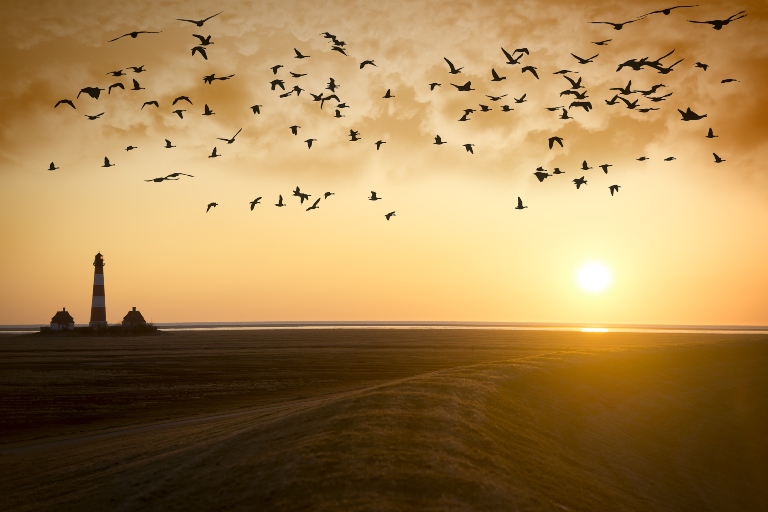 According to research, migrating birds travel over unfamiliar terrain or across oceans without using landmarks by detecting the Earth's geomagnetic fields. (Image: Zwawol via Dreamstime)

It’s a fascinating natural mystery how endangered species make their way to wintering habitats hundreds of kilometers away from their breeding areas. Previous research has revealed that they may use geomagnetic field lines and smell cues to detect orientation. The physiological processes behind this magnetic orientation, however, are unclear.

Neuroscientists and ecologists from Doshisha University and Nagoya University in Japan studied how birds decide which direction to fly during long-distance flights. The findings were published in Science Advances on February 4, 2022.

According to the research, migrating birds travel over unfamiliar terrain or across oceans without using landmarks by detecting the Earth’s geomagnetic fields. They accomplish this with magnetically sensitive proteins in their eyes and magneto-receptive cells in their brains’ vestibular nuclei.

The vestibular nucleus is also thought to contribute to head direction (HD) cells’ activity in a directional sense. HD cells are neurons found in several brain regions that increase their firing rates above baseline levels only when the animal’s head points in a specific direction. They are common to all mammals, perhaps all vertebrates, and underlie the “sense of direction.”

This connection with HD cells motivated the study’s primary and corresponding author, Professor Susumu Takahashi of Doshisha University and his colleagues (including Professor Ken Yoda of Nagoya University), to propose the directional and magnetoreception senses may have a few similar neuronal actors.

The researchers decided to investigate how the brain integrates magnetoreception and direction senses by studying the activity of HD cells in the streaked shearwater (Calonectris leucomelas), a species of seabird that breeds on islands in Japan, Korea, and China before migrating to wintering grounds in the Philippines, Indonesia, and northern Australia.

“Interestingly, juvenile birds do not follow their parents’ simpler deviations down the coast during their initial migratory trip. Instead, they fly directly to their goal via treacherous mountain ranges. It shows that immature birds rely primarily on their internal compass for direction rather than the ambient signals used by adults,” Prof. Takahashi says.

The researchers used a lightweight gadget known as a “neurologger,” which can wirelessly record the electrophysiological activity of the brains of free-roaming wild animals. First, they took five male and five female streaked shearwater chicks from their burrows and placed them in light-blocking cages. The neurologger then captured electrical activity from the brain’s medial pallium area.

The baby birds were then allowed to travel freely and repeatedly in two environments: a chamber and a sea-facing cliff, 2.5 km and 1 km from their burrows, respectively. While the room’s ceiling lights, desks, and seats provided visual signals, the birds could not discern the sun’s direction.

When the birds faced a specific direction, the researchers discovered that almost 20 percent of the cells in the medial pallium area emitted electrical pulses at a higher frequency. In addition, the favored orientation was unevenly distributed in the northern direction.

The cells remained less active when the birds looked in directions other than north. However, their preference for the north direction was found even after moving the experimental location by several kilometers, indicating that the location-independent geomagnetic field was employed as a cue for head direction.

“Our findings show that the internal bird compass might be used to elucidate the neural underpinnings of animal migratory patterns.,” he summarized.

The study emphasizes the importance of HD cells as internal compasses that preferentially indicate the north direction at the start of migrating birds’ first lengthy flights. The HD cells also help integrate the direction and magnetoreception senses. Professor Takahashi believes that the newly discovered neural involvement in migratory bird navigation systems will open up new opportunities for ecological conservation research.