Why Are There Stone Lions in Front of the Gates of Ancient Great Mansions? 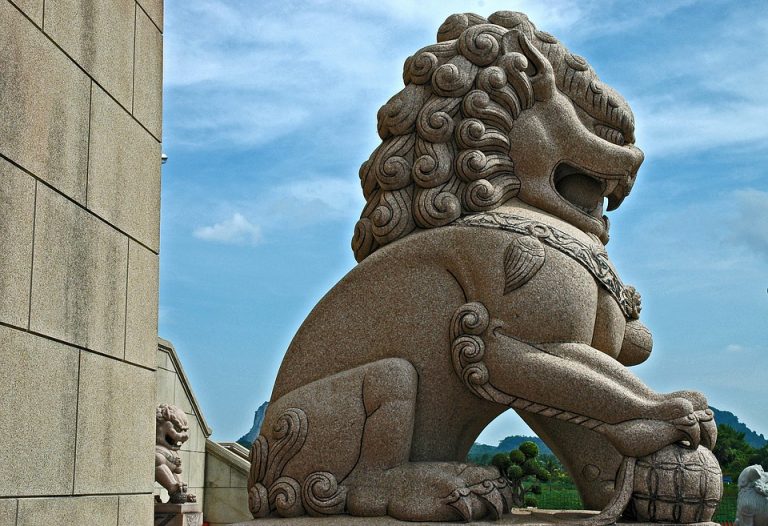 Up to today, the legacy of setting stone lions up in front of a building’s gate to ward off evil spirits can still be seen everywhere. (Image: via Pixabay)

In ancient times, people put a pair of stone lions in front of the entrance door of government offices, temples, and mansions to ward off evil spirits.

Chinese people always regard stone lions as auspicious things and place a pair of them in front of the main entrances of government offices, temples, and mansions. Various styles can even be seen everywhere in famous gardens and scenic spots.

Up to today, the legacy of setting them up in front of a building’s gate to ward off evil spirits can still be seen everywhere. But then, how was this custom formed?

The lion belongs to the mammalian cat family in zoology. It is brave and fierce, originating from Africa, India, and South America. But how did it emerge in China?

According to the chronicle, the reason for lions entering China is that Emperor Wu of Han sent Zhang Qian as an ambassador to the Western Regions to enhance relations, and Pathia sent China lions by envoys.

Afterward, with the spread of Buddhism to China, the lion gradually replaced the tiger as the “king of animals.”

What’s the reason for setting stone lions before the entrance of a door? Firstly, the ancients believed these could ward off evil spirits and initially used them to safeguard the mausoleum. Next, standing them at the rural intersections have the same function as “stone gandang,” to protect the house, repel evil spirits, eliminate dreadful things, and safeguard the village.

Thirdly; show the rich and powerful. The ancient palaces, king’s houses, government halls, and residential houses used stone lions to guard the doors to manifest the power and dignity of the master.

The ancients always regarded them as a symbol of auspiciousness. In addition to being used to keep off evils, it was also an artistic decoration often used in traditional architecture. For example, more than 400 engraved stone lions of different sizes, both male and female, in various postures and very vivid, were placed at the Lugou Bridge in Beijing.

They bestow good luck and happiness

For hundreds and thousands of years, stone lions, unafraid of the cold wind and scorching sun, always have loyally accompanied people and brought good luck and safety. There is such a well-known folk song among the folk.

Stone is initially cold and emotionless, while the lion carved out of it is considered auspicious, happy, safe, harmonious, and brings people the power of stability and support. Therefore, they can be said to be guardians of the Chinese people.