How Cooking Can Teach You to Be a Better Parent 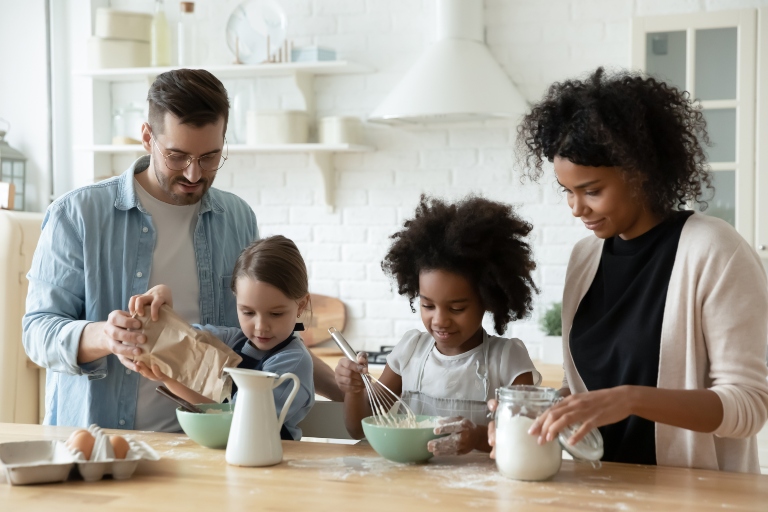 Cooking and dining together can allow someone to be a part of it while it is happening. (Image: Fizkes via Dreamstime)

In an Interview with Reuters Life, Keith Dixon shared his thoughts on how cooking can teach you about parenting.

Keith’s daughter Gracie arrived five weeks early and roughly half the size of a typical baby, ushering in a long time of learning to deal with the unexpected that all new parents encounter.

As Dixon, a lifelong cook, adjusted to fatherhood, he discovered that lessons acquired in the kitchen helped him deal with everything from teething to restless nights.

Cooking for Gracie, Dixon’s memoir of Gracie’s first year, provides recipes and tales about how he learned to be a new cook — quiet enough not to wake his sleeping daughter — even while juggling work and fatherhood in a tight New York City apartment.

Dixon, who has two children, discussed what cooking meant to him and how the parenting experience can be improved while you cook.

Keith says he is entirely self-taught, and this was possible because he grew up in a food-loving family. He ate the delicious food his mother used to make for the whole week, and the menu was composed of spicy delicacies like meatloaf and roasted chicken.

Keith’s father used to arrive with smoked brisket or Chinese food on weekends. So, undoubtedly, Dixon grew up eating well.

However, when he moved to college, like most others, he realized how lousy eating could be when someone goes to college.

Eventually, he also realized that there are only two ways to eat appropriately in this life. One way was to get affluent enough to pay somebody to feed him every night, which was out for him because he was an English student who wanted to be a writer. The only other option, he thought, was to learn to cook. So he became a cook’s apprentice and made a bunch of blunders.

It was something that reminded him of becoming a mom. Because motherhood is a fresh puzzle daily, you wake up with a renewed curiosity or thrill every morning.

How food can improve family life

He believes it will continue to evolve. As Keith’s father often said, things in life that don’t go as planned make life worthwhile. He thinks he was referring to how you may attempt to prepare for your children and steer them in the way you want them to go, but they will never go where you want them to go. In his opinion, cooking and the table will reflect this.

If someone has a family supper every night, they will most likely become a part of their life’s trajectory. Cooking and dining together can allow someone to be a part of it while it is happening.

In the interview, he added that he hopes to hear his daughter say something like: “I truly enjoy Eskimo food.” But if she does, he’ll tell her: “Why don’t we go out tomorrow and acquire an Eskimo cookbook? We’ll do it as a group.” This is what cooking means to him. It allows someone to participate even though life flows in a chaotic way they may not be able to control. It will enable them to communicate.

Indeed, what Keith portrayed is unique, and it is a must to understand the priceless values he wants. Teaching your kids how to cook can be a medium for healthy communication. It’s also a fact that it can be a tool to enhance your parenting expertise and help to bond with your little versions.

So, yes, you should follow his advice to improve your family life.