The Woman in the Brothel 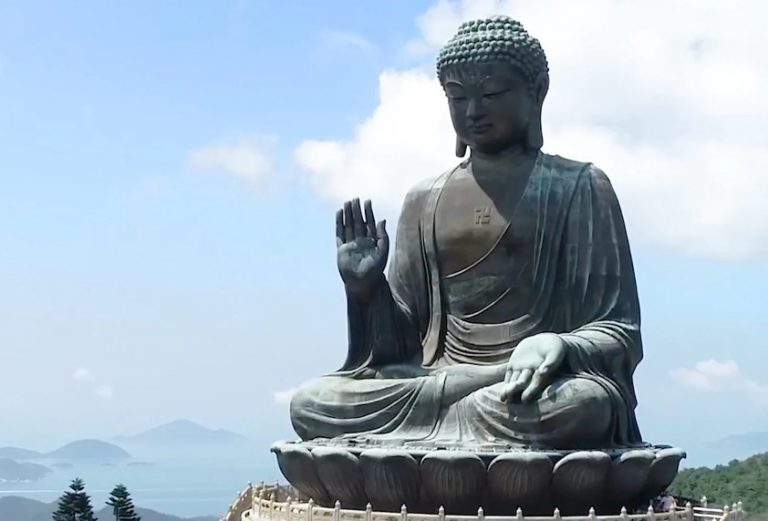 In ancient times, a child was born holding a wan symbol in her right hand, so her parents named her Wan Ru. (Image: via Wikipedia)

In ancient times, a child was born holding a wan symbol in her right hand, so her parents named her Wan Ru. When growing up, Wan Ru was trafficked to a brothel in the area of the Qinhuai River.

She hated this place and felt it was a stain on her from the bottom of her heart. Whenever someone violated her, she would hit her body hard to vent her anger and hatred. Sometimes, she also thought of committing suicide, but she did not dare to take her life. Before going to sleep, Wan Ru would sit silently, write the Buddha’s name out 100 times, and draw the wan 100 times before falling asleep.

A premonition of disaster at the brothel

Once, for several days in a row, she dreamed of fires raging in the sky and the sound of people being miserable. Each time, she woke up in the middle of the night from the nightmare. She told her other sisters that soon, there would be a fire in the brothel and that they should make some plans early to avoid any misfortune. However, the sisters all laughed at her. When she realized that her sisters would not listen to her, she quietly prepared the necessities to be ready for an emergency.

Every day before going to bed, she prepared a whole pot of water. One night, Wan Ru was tossing and turning and had difficulty sleeping. So she got up and sat alone in front of the window, chanting the Buddha’s name. When she suddenly looked up, she saw a fire burning outside the window and woke everyone in a panic. Frightened voices were heard. While the madam was busy putting out the fire, Wan Ru quietly took the necessities she had prepared and took the opportunity to escape from the building.

Wan Ru ran for several days and came to a faraway place. One day, when she was tired of walking, she saw some nuns washing and fetching water at the riverside while offering water to drink.

Standing in the queue, she heard the bell coming from the mountain. The mellow bell reverberation made her feel intoxicated and calm, so she listened, and her inner heart understood the quiet. Thus, the idea of becoming a nun was born. She followed the nuns to the mountain and joined them from that day on.

In the nunnery, every day, besides cleaning the building, carrying water, and cooking, she meditated and recited Buddhist scriptures. After being away from the world, her heart was purified, but she still had some doubts that could not be resolved. For example, she often thought: “When the body is dirty, it can be cleaned by washing it. But if the heart is impure, what can be done to cleanse it thoroughly?”

It was strange — whenever it was her turn to go down the mountain to get water, there would be a sudden downpour of rain with hailstones hitting her body so hard that it would hurt. The rain and hail stopped every time after just a moment or two.

Afterward, Wan Ru returned to the nunnery with her wet clothes, carrying water and treading the muddy mountain road with incredible difficulty. After many repetitions, the nuns commented that she was a woman from a brothel, so naturally, her sins were deep, and her virtues were shallow, so she often incurred the wrath of the gods and Buddhas.

Wan Ru held her tongue and continued to chant Buddhist sutras and meditate as she had always done. She only believed that there was a reason for everything. Since she practiced Buddhism, she regarded all the causes and effects during the process as the best blessings. Therefore, she used her great patience to integrate all the uncertainties during the practice.

One day, a few years later, an artist climbed a high mountain to create a painting. That day, Wan Ru happened to go down the hill to get water. Suddenly, there was heavy rain, and the painter rushed to a nearby pavilion to escape the rain.

After so many years, Wan Ru was accustomed to the rain and hail, and her mind was already calm and quiet. Yet, deep in her heart was the joy that this rootless water from the sky could always cleanse her body.

In the haze of the rain, the artist saw a nun carrying water in the rain, walking steadily. When he glanced up, he saw the Bodhisattva standing mid-air, holding a purifying vase, taking out a willow branch, and pouring purifying water on the nun. The painter was so amazed at what he saw that he worshipped the Bodhisattva repeatedly. He understood that the rain was primarily to cleanse the nun.

After the rain stopped, the artist quickly drew the scene from memory and inscribed it with the title: Pure Water. Again, he felt a deep sense of relief!