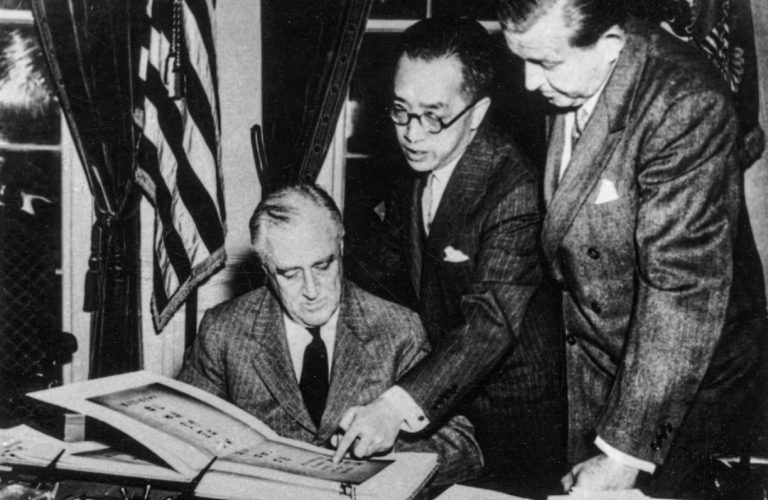 Hu Shih (December 17, 1891 to February 24, 1962) was a Chinese literary scholar, philosopher, and diplomat. He held degrees from Cornell and Columbia universities and was later appointed Ambassador of the Republic of China to the U.S. between 1938 and 1942. He then served as Chancellor of Peking University between 1946 and1948.

When Hu was 13 years old, his parents, with the help of a matchmaker, arranged for the 14-year-old Jiang Dongxiu to be his future wife. Hu then left Shanghai and traveled to the United States to pursue his education.

Hu wrote to Jiang when he was studying abroad, encouraging her to learn to read and write. He also wrote to his mother, asking her to urge Jiang to write to him often.

Hu had often expressed in his diary the guilt and gratitude toward Jiang, who cared for his mother year after year, awaiting his return.

Thirteen years later, in the winter of 1917, Hu Shih returned home and married Jiang Dongxiu as he had promised. Once married, they moved to Beijing. Hu accompanied Jiang to shop, watch movies, dine and enjoy the big metropolis. Being a night owl, Hu changed his work hours to accommodate his wife’s and children’s schedules. He wanted to be a good husband and father.

Hu Shih followed the “perfect husband playbook” — accompany the wife when she goes out, follow her orders, agree with her even when she is wrong, wait for her while she puts on make-up, remember her birthday, tolerate her scolding, and let her spend money.

During their stay in the United States, Jiang sometimes forgot to cook for Hu when she played mahjong. However, he didn’t get upset. Instead, he learned to cook and developed excellent culinary skills. When Jiang needed a fourth mahjong player, Hu would call around and find her a new player.

As a result, his friends teased him and called him “good for nothing.” They said he buckled under the pressure of the old-fashioned marriage customs and urged him to get a divorce. Hu Shih laughed at himself, saying he had joined the “Fear of the Wife Association.”

Hu collected stories from around the world of husbands who feared their wives and came up with an amusing conclusion. He couldn’t find any reports from Germany, Japan, the Soviet Union, and countries under a totalitarian regime or ruler back then. Therefore, Hu said that husbands who were scared of their wives only lived in free and democratic countries.

He wasn’t afraid of his wife. On the contrary, he was grateful for her kindness, understood her challenges, and appreciated her sincerity. “Since we are married, we should learn to get along,” Hu told himself.

How does a couple make a marriage last?

For this question, Hu Shih gave us some clues:

Understand and accept each other

Jiang wasn’t educated, but Hu didn’t look down on her. On the contrary, he was understanding and tolerant of her and tried to look at things from her point of view. He focused on her strengths.

Appreciate and support each other

Jiang suggested Hu focus on higher education and avoid a political path. Hu once commented: “A wife who fails to see the big picture would want her husband to be a high-ranking official, but my wife encouraged me to return to university. I feel guilty, and I admire her for it!”

Respect and care for each other

Hu Shih wrote to his wife to express his guilt for accepting the appointment as the ambassador to the U.S. against his wife’s wish. However, he promised: “By the war’s end, I will return to university.” The letter showed he respected and cared for his wife.

A mismatch doesn’t always lead to a bad ending. As long as the couple can nourish the relationship, an arranged marriage can blossom into a beautiful bouquet. But unfortunately, outsiders often can’t see nor understand the intricate inner emotions of relationships.