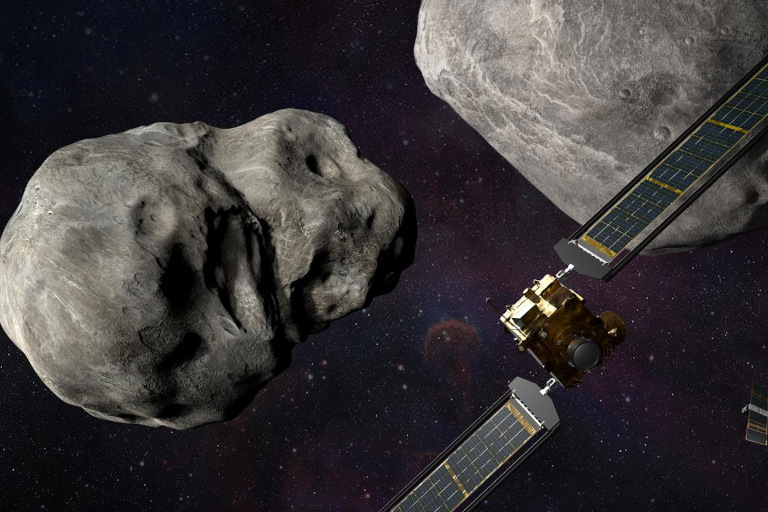 As NASA prepares to usher in a new form of planetary defense, one Johns Hopkins engineer will be eagerly awaiting the big collision with an asteroid that she is helping orchestrate.

Elena Adams, the mission systems engineer at the Johns Hopkins Applied Physics Laboratory, and her team will spend the next two weeks carefully observing Didymos, a double-asteroid system that poses no threat to Earth and yet will be the target of NASA’s Double Asteroid Redirection Test — a first-of-its-kind, proof-of-concept mission that will intentionally crash a spacecraft into an asteroid’s moonlet to deflect it away from its course. Adams said:

“During the day of impact, I’ll be more of a conductor, making sure that all of the orchestra is following the beat and playing their parts. Of course, I will also be looking at the data coming down, deciding with the team whether we need to execute any contingencies, and also waiting with bated breath for those final images and the loss of signal from the spacecraft, which will mean that we hit.”

Johns Hopkins APL manages the DART mission for NASA’s Planetary Defense Coordination Office. The engineers working on the mission recently got a good look at their target — the moonlet Dimorphos — thanks to a powerful camera attached to the spacecraft. The Didymos Reconnaissance and Asteroid Camera for Optical navigation, or DRACO, helped capture the precise location of the asteroid and its moonlet and will play a vital role in mission adjustments in the coming weeks.

The DART spacecraft will impact the Didymos asteroid

Using DRACO observations taken every five hours, the DART team will make trajectory corrections to set the spacecraft on the correct course to meet its target at its scheduled impact time. DART will ultimately depend on its ability to see and process images of Didymos and Dimorphos to guide the spacecraft toward the asteroid, especially in the final four hours before impact — the terminal phase. At that point, it will autonomously guide itself to its collision with the moonlet. Adams said:

“There is definitely stress. People are checking and re-checking all of spacecraft settlings to make sure we have the best probability of impact, and conducting analyses on DRACO images to date to really pin down the best configuration for the Terminal images. But there is also a lot of excitement about this wonderful journey that we took to the Didymos system and anticipation of impact. It is a culmination of many years of work and preparation. … Though there is some nervous energy in the air, we feel ready.”

The spacecraft will intercept the Didymos system at 7:14 p.m. on Monday, Sept. 26, with DART slamming into Dimorphos at roughly 4 miles per second. A watch party featuring giveaways, food, and a live DJ will begin on the 26th at 6 p.m. on Keyser Quad of the Homewood campus. Large screens will feature NASA’s stream of the collision. The mission will attempt to prove that a spacecraft can autonomously navigate to a target asteroid and intentionally collide with it.

The technique, called kinetic impact, will help future earthlings prepare for asteroids that may pose a threat to the planet, should one ever be discovered. Scientists estimate the kinetic impact will shorten Dimorphos’ orbit by several minutes — changes they will precisely measure using telescopes on Earth. The results will be used to both validate and improve computer models for kinetic impact. Adams said:

“This is an amazing moment for our space program. For the first time, we will move a celestial body intentionally in space, beyond Earth orbit! This test goes beyond international borders, and really shows what we can accomplish if we all work together as one team and as one Earth.”

Provided by Johns Hopkins APL [Note: Materials may be edited for content and length.]