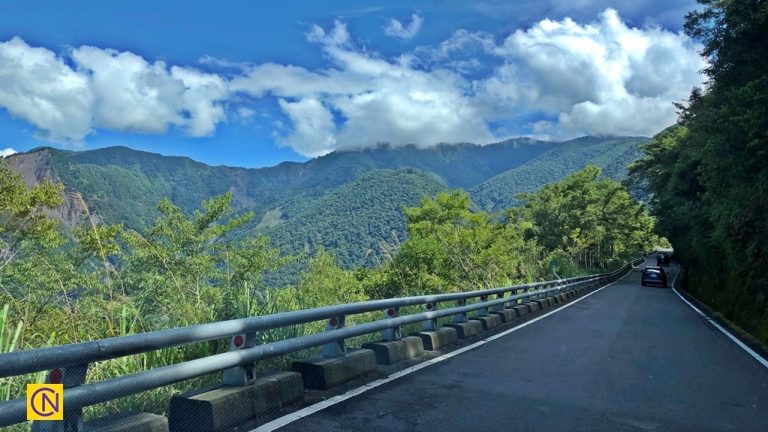 Completed in 1972, the Southern Cross-Island Highway is 208 kilometers (129 miles) long, which connects Tainan City’s West Central District on the west coast and Guanshan Township in Taitung County on the east coast.

Passing through hot springs, alpine lakes, hiking trails, pristine cypress forests, and magnificent valleys, this east-to-west route is one of the country’s most beautiful scenic highways. In particular, its passing through the famous Yushan National Park makes the highway even more popular with tourists.

History of the Southern Cross-Island Highway

The Southern Cross-Island Highway was basically constructed along the Guanshan Historic Trail, which was built in 1921 by the Japanese during the Japanese Colonial Period (1895-1945) for the purpose of regulating the aboriginal peoples there.

Taking 4 years and 4 months, this Cross-Island Highway was cut through the mountains in July 1968 and completed on October 31, 1972, but the highest sections were not fully completed until 1992.

Like the Central Cross-Island Highway, this highway was constructed by way of traditional excavation methods. Therefore, a total of 116 ex-soldiers and other workers died in this arduous undertaking.

In fact, this highway and its 50-meter (160 ft) surroundings were off-limits to the public until 1993. Moreover, about 70 percent (140km) of the road was damaged and 22 bridges were washed away by strong typhoon Morakot in 2009 and the subsequent heavy rainfalls in 2012. What’s even worse, a bridge along the highway was swept away by typhoon Lupit in 2021.

After a 13-year closure, this beautiful alpine highway was finally reopened to the general public on  May 1, 2022. Nevertheless, the section between Meishankou and Xiangyang is only open from 7:00 a.m. to 2:00 p.m. every day, except Tuesdays and Thursdays.

Tianchi, literally meaning “Heaven’s Pond,” is an alpine pond tucked away in the Central Mountain Range at Meishankou (梅山口) along the Southern Cross-Island Highway. The lake is also nicknamed “Heart Lake” because it is in the shape of a heart.

Though it is simply about 2 meters (6.6 ft) in depth, and occupies only about 1,800 square meters (0.44 acres), the water in Tianchi never runs dry. Among others, Tianchi also marks the midpoint of the Southern Cross-Island Highway.

At the foothill by this east-west highway at Meishankou, there exists an eye-catching monument and a small shrine called Changqing Shrine (長青祠). They were built in 1979 to commemorate the 116 ex-soldiers and workers who died during the construction of the Southern Cross-Island Highway.

The lookout and the platforms around the shrine are great locations to appreciate the majestic views of Yushan (Mt. Jade) at 3,952 meters (12,966 ft), which is the tallest peak in Northeast Asia.

Besides, Tianchi is the end of the famous Zhongzhiguan Historic Trail (中之關古道). Meandering through beautiful forests with pristine cypress woods, this 3.5 km-long (2.1 miles) historic trail used to be an important route for the Bunun tribe, and was a special path for the Japanese police to regulate the indigenous peoples in that area during the Japanese colonial period.

Literally meaning “Cypress Valley,” Kuaigu is an impressive roadside attraction located approximately 6 kilometers (3.7 miles) from Tianchi. It is one of the most important natural forests along the Southern Cross-Island Highway.

There is a magnificent cluster of towering cypress trees at Kuaigu. Among them are the thousand-year-old twin trees on the roadside, which is a popular spot for photography.

Situated 2,722 meters (8,930 feet) above sea level in the Central Mountain Range, Yakou (literally meaning mountain pass) is the highest point of the Southern Cross-Island Highway. It is a great spot for viewing the breathtaking sea of clouds in the valley and the splendid landscapes around it.

Nestled at the junction of Kaohsiung City and Taitung County, this attraction has been designated as Xiangyang National Forest Recreation Area. There are many towering ancient trees in this forest recreation area, foremost among which are Taiwan red pine (Pinus taiwanensis) and Taiwan red cypress (Chamaecyparis formosensis).

In particular, Songtao Trai is one of the routes that lead to the famous Jiaming Lake, which is recognized as “High-Mountain Sapphire” and “Angel’s Tears.”

The famous Wulu Gorge is about 4 kilometers (2.5 miles) in length. It is a large S-shaped gorge cut by the Wulu River. Due to constant erosion by the water in the high mountain rivers, the steep precipices at the Wulu Gorge are majestically beautiful.

Lying beside the Southern Cross-Island Highway, the Liukuo Hot Springs (六口溫泉) at the Wulu Gorge was first discovered by construction workers of this alpine highway by accident. They then set up six bathing pools on the roadside for enjoyment after work. That’s the origin of the hot springs’ name.

The hot springs in the six pools have different temperatures. The one closest to the source is the hottest, and it’s the place where visitors tend to boil eggs in the hot spring water. In particular, It is fantastic to have a nice foot soak while enjoying the colorful canyon cliff walls.