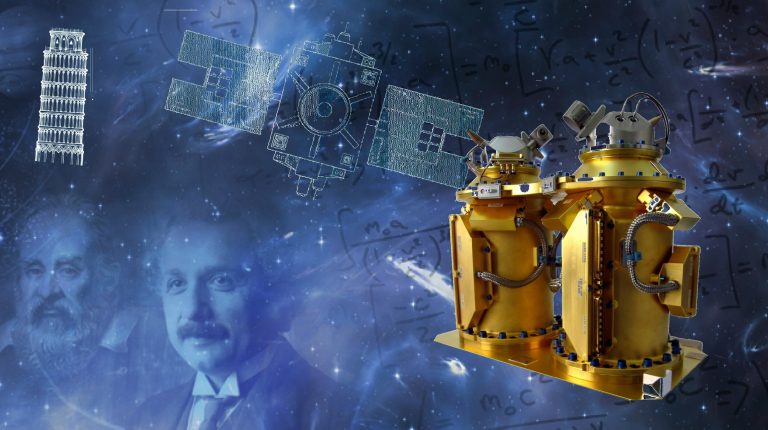 In new studies published in Physical Review Letters and a special issue of Classical and Quantum Gravity, a team of researchers presents the most precise test yet of the Weak Equivalence Principle, a vital component of the theory of general relativity. The report describes the final results from the MICROSCOPE mission, which tested the principle by measuring accelerations of free-falling objects in a satellite orbiting Earth. The team found that the accelerations of pairs of objects differed by about one part in 1015, ruling out any violations of the Weak Equivalence Principle or deviations from the current understanding of general relativity at that level.

The theory of general relativity, published by Albert Einstein in 1915, describes how gravity works and relates to time and space. But because it does not account for the observations of quantum phenomena, researchers look for deviations from the theory at increasing levels of precision and in various situations. Such violations suggest new interactions or forces that could unite relativity with quantum physics. Testing the Weak Equivalence Principle (WEP) is one way to look for potential expansions to general relativity. Gilles Métris, a scientist at Côte d’Azur Observatory and member of the MICROSCOPE team, said:

“We have new and much better constraints for any future theory, because these theories must not violate the equivalence principle at this level.”

The MICROSCOPE satellite will measure the Eötvös ratio

According to the WEP, objects in a gravitational field fall similarly when no other forces are acting on them, even if they have different masses or compositions. To test the principle, the MICROSCOPE team designed their experiment to measure the Eötvös ratio — which relates the accelerations of two free-falling objects — to extremely high precision. If the acceleration of one object differs from the other’s by more than about one part in 1015, the experiment would measure it and detect this violation of the WEP.

To measure the Eötvös ratio, the researchers monitored the accelerations of platinum and titanium alloy test masses as they orbited Earth in the MICROSCOPE satellite. The experimental instrument used electrostatic forces to keep pairs of test masses in the same position relative to each other. It looked for potential differences in these forces, indicating differences in the objects’ accelerations. A significant challenge of the experiment was finding ways to test the instrument on Earth to ensure it would work as designed in space. Manuel Rodrigues, a scientist at the French aerospace lab ONERA and member of the MICROSCOPE team, said:

“The difficulty is that the instrument we launch cannot operate on the ground. So it’s a kind of blind test.”

Once the instrument was ready, the team launched it in 2016. They released preliminary results in 2017, but they continued to analyze the data, accounting for glitches and systematic uncertainties, after the mission ended in 2018. They ultimately found no violation of the WEP, setting the most stringent constraints on the principle yet.

The team’s work paves the way for even more precise tests of the WEP with satellite experiments. Their analysis includes ways to improve the experimental setup, like reducing crackles in the satellite’s coating that affected acceleration measurements and replacing wires in the setup with contactless devices. A satellite experiment that implements these upgrades should be able to measure potential violations of the WEP at the level of one part in 1017, the researchers say. But the MICROSCOPE results will likely remain the most precise constraints on the WEP for a while, Rodrigues said:

“For at least one decade or maybe two, we don’t see any improvement with a space satellite experiment.”

Provided by American Physical Society [Note: Materials may be edited for content and length.]