The Chelyabinsk Meteor Explosion in Russia Remains a Mystery 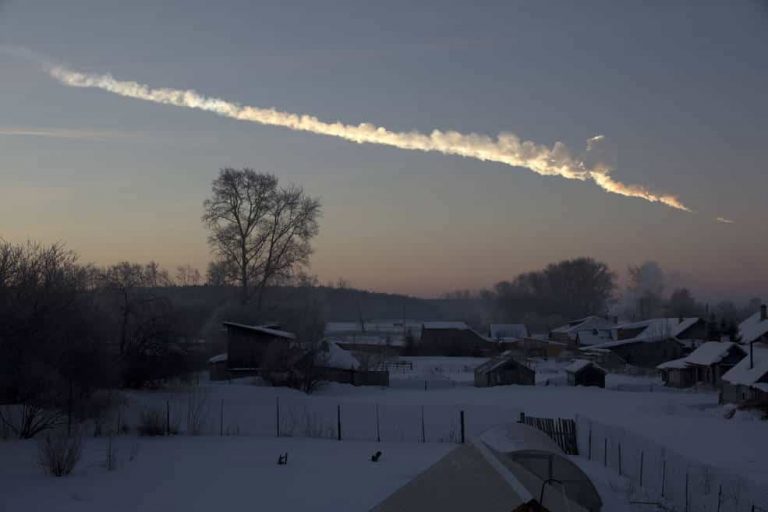 As the sun rose over Russia’s Ural Mountains shortly after dawn on February 15, 2013, the largest mid-air meteor explosion since the Tunguska event of 1908 occurred. The undetected meteor, or bolide, which measured around 60-65 feet across and weighed around 12,000-13,000 metric tons, hurtled into Earth’s atmosphere at 40,000 mph.

A blast more potent than a nuclear explosion

While burning from the friction of Earth’s thin air, the supersonic flying space rock exploded 12 to 15 miles above Chelyabinsk, producing sonic booms and a total blast power of 500 kilotons. The destructive power was 30 times the blast yield of the U.S. atomic bomb that was dropped on the Japanese city of Hiroshima in 1945.

The dazzling fireball and its after-effects were felt in six Russian cities. The explosion created an enormous shock wave, a bright flash, and a cloud of dust and gas. Some people even felt intense heat from the fireball. The fireball was 30 times more brilliant, with some people suffering retinal burns and skin burns from it.

The shock wave that was generated shattered windows and caused structural damage to more than 7,200 buildings, according to officials in that city, with around 1,600 people seeking treatment for injuries, mainly from flying glass.

Some scientists even think the meteor may have briefly outshone the Sun. The blast was more potent than a nuclear explosion and triggered detections from monitoring stations as far away as Antarctica.

It was initially thought the meteor came from a 1.24-mile-wide near-Earth asteroid known as 1999 NC43. However, after a closer look at the asteroid’s orbit and likely mineral composition (gained from spectroscopy), there are few similarities between it and the Russian meteor.

The hunt for fragments

In the days after the explosion, meteorite hunters from around the world rushed to the remote area, trying to find pieces of the meteorite. Finally, just days after the explosion, on February 18, 2013, the first pieces were found around Lake Chebarkul, 43 miles north of Chelyabinsk. At that location, scientists found a hole in the ice, which they thought could be traced back to the impact.

Two more significant pieces of rock had survived the initial explosion in the sky; they continued their journey through the atmosphere.

One of them broke apart at an altitude of about 11 miles. The other cruised and eventually landed in Lake Chebarkul, leaving a 23-foot-wide hole in the ice. The 1,400-pound meteorite was recovered from the bottom by divers in October. Scientists believe about five tons of meteoritic material reached the surface of Earth. The meteor is the only one to have resulted in many injuries something over 1,000.

An image of the meteor shortly after it entered the atmosphere by the weather satellite Meteosat 9. Witnesses in Chelyabinsk also reported that the air smelled of gunpowder, sulfur, and burning odors that started about one hour after the fireball and lasted all day.

Its origin remains a mystery

Scientists do not know where the object came from. Coincidentally, the explosion came on the same day that Earth was flying. The asteroid, called 2012 DA14, passed within 17,200 miles of Earth. NASA quickly pointed out that the asteroid was traveling opposite the smaller meteor that exploded over Chelyabinsk.

Hundreds of published scientific studies later, scientists are unsure of the origin of the Chelyabinsk superbolide. While they confirm that it was not related to asteroid 2012 DA14, they are still no closer to knowing if the Russian meteor had a parent body, since asteroids in space are known to travel in pairs or groups.

By analyzing infrasound records, researchers could learn how long a meteor was in the air, which direction it traveled, and how much energy it unleashed. The information came from the network of infrasound sensors operated by the Comprehensive Test Ban Treaty Organization (CTBTO), which are used to monitor nuclear explosions.

Infrasound is a low-frequency sound wave that only a few other animals can hear. As it turns out, meteors entering Earth’s atmosphere can cause ripples of infrasound. The infrasound signals from the Russian meteor were the strongest ever detected by the CTBTO network, with the furthest station to record the sub-audible sound being in Antarctica, over 9,300 miles away.

Watch this compilation of the Chelyabinsk meteorite:

Impacts of meteoroids with an energy yield similar to the Chelyabinsk superbolide only happen a few times per century. As for them being so close to a city, it only happens once every 10,000 years. So the real problem is that nobody knows when and where the next Chelyabinsk-like event will occur.