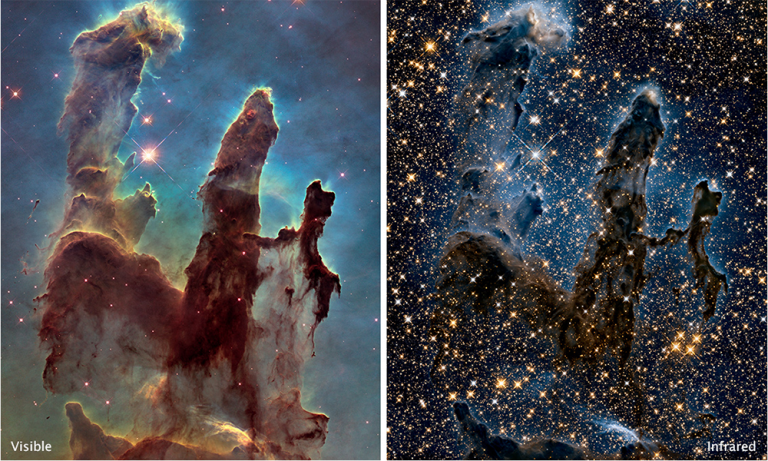 The famous Pillars of Creation in the Eagle Nebulae — a star nursery — are believed to result from the hydrodynamic instabilities from magnetic fields that form when plasmas are exposed to high-intensity light from neighboring stars. Stretching roughly 4 to 5 light-years, the Pillars of Creation are a fascinating but relatively minor feature of the entire Eagle Nebula, which spans 70 by 55 light-years.

The nebula, discovered in 1745 by the Swiss astronomer Jean-Philippe Loys de Chéseaux, is located 7,000 light-years from Earth in the constellation Serpens. With an apparent magnitude of 6, the Eagle Nebula can be spotted through a small telescope and is best viewed during July. A large telescope and optimal viewing conditions are necessary to resolve the Pillars of Creation.

Something very similar to the process happening within the Pillars of Creation occurs — at a minute scale — when materials are imploded by converging laser beams during high-energy-density physics and fusion experiments at the Laboratory for Laser Energetics at the University of Rochester.

The aptly named Pillars of Creation, featured in this stunning Hubble image, are part of an active star-forming region within the nebula and hide newborn stars in their wispy columns. Although this is not Hubble’s first image of this iconic feature of the Eagle Nebula, it is the most detailed. Blue colors in the image represent oxygen, red represents sulfur, and green represents nitrogen and hydrogen. The pillars are bathed in scorching ultraviolet light from a cluster of young stars outside the frame. The stars’ winds slowly erode the towers of gas and dust.

“You shine the lasers, you evaporate mass off of the surface, and push everything radially inwards, and you have these hydrodynamic instabilities that have modulations similar to the Pillars.”

“It is well known that magnetic fields can strongly impact how plasmas behave, but the mechanisms for self-generation and amplification of magnetic fields in different types of plasma continue to be a mystery.”

With funding from a US$390,000 National Science Foundation grant, Aluie will address this mystery with co-PI Riccardo Betti, LLE’s chief scientist and Robert L. McCrory Professor, and Fernando Garcia-Rubio, assistant scientist at the LLE and in Aluie’s Turbulence and Complex Flow Group, who has been developing the theory for this work. The goal is to identify the primary mechanisms by which magnetic fields are self-generated in irradiated plasmas subject to instabilities. The work will involve theoretical analysis and numerical simulations. Aluie said:

“Based on previous research that we and others have done, and hope to develop in more depth, we know that these magnetic fields, even if they are initially small in strength, grow quickly. They affect the way heat moves around the surface of the plasma and evaporates mass, which alters the way the instability forms. And in the case of fusion experiments, it alters the way the target becomes unstable.”

Provided by the University of Rochester [Note: Materials may be edited for content and length.]