Near-Death Experience: The Realm Between Life and Death 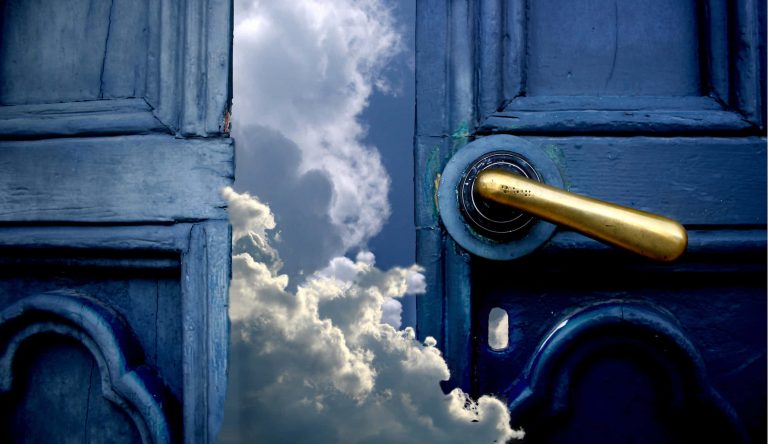 You'll encounter three doors on your journey in life. On each door, you'll see some words. Then, when you read them, you'll understand. I'll be waiting for you after you've passed through the third door." (Image: via Pixabay)

A near-death experience can leave a lasting impact on a person’s life. But, even if you’ve never experienced a close brush with death, you’ve probably seen or read about it in popular media.

In movies, we usually see a scene where the star is bleeding out or lost at sea or in a desert. Then comes a calming and emotional moment where the star meets a dead friend, relative, or deity. In this out-of-body experience, the hero speaks with this dead person, who tells them it’s not yet their time.

So, are these real? And do near-death experiences have an explanation?

You’ve probably met someone who has had an out-of-body experience. Maybe you have. And despite the difference in religion or age, people with near-death backgrounds share several commonalities. They usually report a bright light in the darkness, becoming pain-free, recollecting excellent and bad times, floating above their bodies, or seeing events in real-time, even when under anesthesia.

Near-death experiences (NDEs) occur during heart attacks, blunt force trauma, and asphyxia, among other life-threatening events. People have reported floating above their bodies or going to another realm that defies our space and time. But it remains a mystery why people become peaceful in these situations instead of panicking.

These events cannot be written off as imaginations of the brains. On the contrary, there is real-time evidence that these events in notable cases are actual, even though numerous scientific theories attempt to tie them back to biochemical processes in the brain.

In this article, we will look at some of the explanations science tries to give for otherwise unexplained but indisputable experiences.

Even skeptics cannot accuse people of lying about near-death experiences. It is a phenomenon that has been well-recorded throughout history, and even atheists have reported experiencing NDEs. So nobody can dismiss NDEs as fabrications.

But NDEs raise a host of questions. For example, what is it like almost dying? How long does the brain stay alive after death? What happens to the brain when experiencing NDEs? And is there a scientific explanation for NDEs?

Dean Mobbs, who works at the University of Cambridge’s Medical Research Council Cognition and Brains Science Unit, believes NDEs have a scientific explanation. “Many of the phenomena associated with near-death experiences can be biologically explained,” he says.

For example, the eerie feeling that you are dead is not limited to NDEs. Patients with Cotard’s syndrome, also called the “walking dead” syndrome, have reported this feeling. In rare cases, some people say they have lost their organs, blood, body parts, or soul. And in the extreme, these patients report they are dead. This syndrome occurs after a traumatic event and is linked with brain regions such as the prefrontal and parietal cortex. Nobody knows how it comes about, but scientists like Mobbs believe that patients try to make sense of their situations. And similarly, NDEs may be a person trying to come to terms with their experience.

A 2005 study revealed that OBEs could be artificially induced by stimulating the temporoparietal junction. This may mean NDEs can trigger some parts of the brain, potentially creating confusion when processing sensory information. However, many NDEs are reported when people are entirely dead and when there is no longer any activity in the brain or body.

However, other conditions like schizophrenia and Parkinson’s come with visions and hallucinations. For example, reports of near-death experiences describe people meeting the dead, angels, or a deity. Parkinson’s patients also report images of gods, ghosts, or monsters.

Parkinson’s disease involves an unusual functioning of dopamine. This is a midbrain part that releases noradrenaline, which is a stress hormone released in high-stress events. The locus coeruleus is also interconnected with the amygdala and hypothalamus, which mediate emotions and memories. And the locus coeruleus may be behind weird memory recollections.

One common aspect of almost all NDEs is the vision of a calming bright light. Some scientists believe this occurs because of the eye’s limited blood and oxygen flow. They believe this limits a person’s range of vision, creating tunnel visions.

Also, some researchers believe NDEs are a byproduct of brain chemicals. Drugs such as ketamine, LSD, and ayahuasca mirror the calming and blissful effect seen in near-death experiences. In some cultures, priests used to take drugs to enter a trance where they could speak with the deceased or their gods.

Whether you believe NDEs have a scientific explanation or are a manifestation of the afterlife, it’s hard to dispute that they change a person.

Most people who have a near-death experience usually come out as more caring and generous people. Sometimes they develop a state of unconditional compassion for everyone. In addition, this life-changing experience often gives people a moral or religious spark, allowing them to start life as new people and bring positive change.