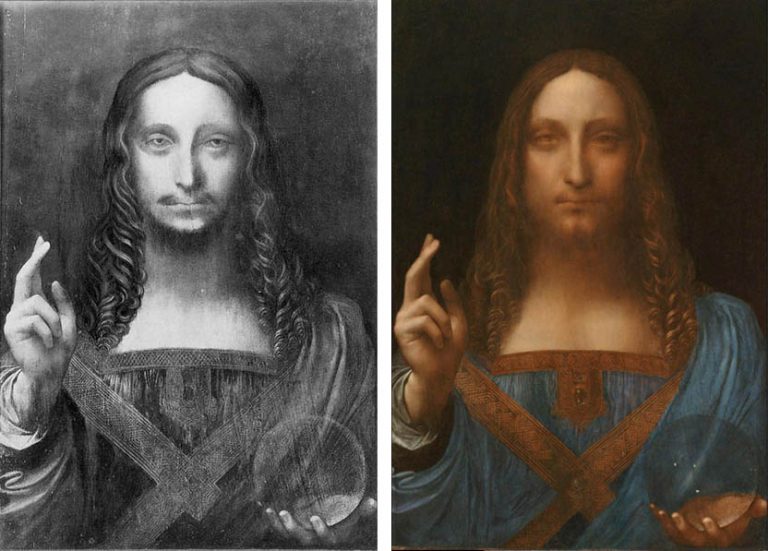 Leonardo da Vinci’s painting Salvator Mundi (Latin for “Savior of the World”) already has an illustrious history, including having vanished for hundreds of years before surfacing on the art market circa 1900.

Even though Salvator Mundi was several centuries old and once owned by Charles I, it attracted little buyer interest for many years. This is because the piece was inadequately restored and heavily overpainted. Moreover, its wood support had been infested with worms.

For these and other reasons, a consortium represented by New York art dealer Alexander Parish was able to buy the Salvator Mundi for just US$1,175 in 2005.

Given the state of the painting, the consortium hired the renowned art restorer Dianne Modestini to oversee the reconstruction, strip the overpainting, and fill in missing parts. Upon examining the Salvator Mundi with an infrared camera, she discovered the artist had initially wanted to paint Christ’s right thumb straight instead of curved, which suggested that the painting was not a copy but an original.

Other experts who analyzed the painting discovered that while its composition indicated Salvator Mundi was an original, its newly restored style suggested that da Vinci was the artist.

In light of this revelation, the value of Salvator Mundi increased from US$1,175 to US$75 million when auctioned off by Sotheby’s in 2013 before being sold in 2016 to Russian collector Dmitry Rybolovlev for US$127.5 million. In 2017, the auction house Christie’s sold the masterpiece to the Saudi Arabian crown prince Mohammed bin Salman for US$450 million, the highest amount ever paid for an artwork.

However, not all experts were convinced that Leonardo da Vinci had created the painting.

In an article written for Vulture in November 2017, Art critic Jerry Saltz accused Christie of inflating the painting’s value. Saltz said: “I’m no art historian or any kind of expert in old masters. But I’ve looked at art for almost 50 years, and one look at this painting tells me it’s no Leonardo. The painting is absolutely dead. Its surface is inert, varnished, lurid, scrubbed over, and repainted so many times that it looks simultaneously new and old.”

Martin Kemp, who, unlike Saltz, is an art historian and one of the world’s leading da Vinci experts, said that he knew immediately upon first viewing the restored painting that it was the work of the artist. “It had that kind of presence that Leonardos have … that uncanny strangeness that the later Leonardo paintings manifest.”

The painting portrays Jesus gesturing in blessing with his right hand while holding a crystal orb in his left hand. While rendered with beautiful scientific precision, da Vinci failed to paint the distortion when looking through a clear orb at disconnected objects that would invert or reverse the images. Instead, the artist painted the orb as a hollow glass bubble that does not refract or distort light when passing through it.

If da Vinci had accurately depicted the distortion, the palm touching the orb would have remained the way he painted it, but reflected inside the orb would be a reduced and inverted mirror image of Christ’s robes and left arm. This is puzzling as da Vinci was a student of optics studies, and how light reflects and refracts was an obsession of his.

The face and blessing hand

Leonardo da Vinci was a master of the so-called sfumato effect, the style we see in the face of Mona Lisa, Saint John the Baptist, and the Virgin and Child with St. Anne. The delicate shading that produces soft, imperceptible transitions between colors and tones in these masterpieces is evident in Salvator Mundi.

Infrared reflectography (IRR) imagery also reveals distinct handprints, especially on the left side of Christ’s forehead, where the artist smoothed and blotted the paint with his palm. This kneading of the paint to create soft and amorphous effects of shadow and light is typical of da Vinci’s technique.

However, the Salvator Mundi blessing hand is the most realistic, da Vinci-like element in the entire painting. Its elegant design and unbelievably well-painted anatomy and juxtaposition make it one of the best examples of a hand compared to his other paintings. It’s the most believable element in the painting connecting it to da Vinci.

During the conservation process, pentimenti — preliminary compositional ideas, subsequently changed by the artist in the finished painting but not reflected in the etching or painted copies, a common technique of da Vinci — were observed through infrared imaging and duly photographed. The most prominent is a first position for the thumb in the blessing hand, more upright than in the finished product.

No matter how much time the experts would spend comparing this work to others done by da Vinci, there is still much doubt that it is his work. And if it’s not a skillful forgery, da Vinci’s style is most definitely reflected in the face and the blessing hand.