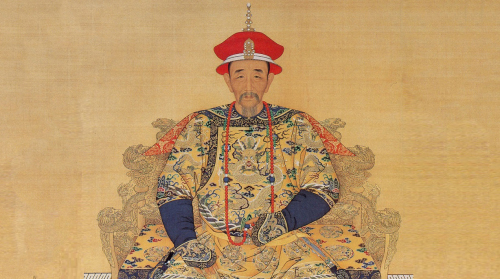 A portrait of Emperor Kangxi in court dress. (Image: via Public Domain)

The longest reigning emperor in China’s history was Emperor Kangxi, who ruled for 61 years. Following the death of his father, Emperor Shunzhi, at the age of 22 from smallpox, Aixinjueluo inherited the throne on February 7, 1661, at age 7. The following year, he changed his name to Kangxi. He began the administration of state affairs at 14 until his death at 69 in 1722.

Ascension to the throne and mandate

Despite his sincere attempts to administer the country, the young emperor encountered many obstacles with the authoritative Oboi. One major issue involved the reunification of Taiwan, which Oboi opposed. Kangxi realized that if Oboi continued to hold authority, it would threaten his rule and adversely affect the foundation of the Qing Dynasty.

On August 25, 1667, the then 14-year-old emperor dismissed Oboi and took over the administration of state affairs. Following the imprisonment of Oboi, Kangxi could firmly establish his mandate as emperor.

Kangxi was known as the great consolidator of the Qing Dynasty. He strengthened the central control of the emperor to safeguard and consolidate the interests of the feudal state. In addition, he suppressed three insurgencies that threatened the country’s unity, continued efforts to recover Taiwan, and took measures to safeguard the Eastern and Southern China Seas.

In an attempt to subdue the ambitions of Ivan V and his half-brother, Peter I of Russia, Kangxi sent troops to Heilongjiang River Basin to evict the Russian invaders and entered into the Sino-Russian Treaty of Nerchinsk in 1689, which established the eastern border between Russia and China. The border consolidation created a vast territory, uniting a large population of many different ethnicities.

In economic policy, Kangxi focused on reducing taxes while providing relief funds and grains to help relieve rural starvation. In addition, he rewarded those who cultivated unused land and implemented various policies that significantly enhanced the country’s economic development.

Throughout his life, Kangxi diligently studied books on mathematics, astronomy, law, physics, medicine, and history. In addition, he studied painting and calligraphy and was the first Chinese emperor to play a Western musical instrument, a spinet harpsichord.

He commissioned the first precise maps of Beijing and the Qing empire and invited Christian missionaries and Western scholars to China, who introduced new technologies and operated the imperial observatory.

He repeatedly laid down orders to organize and compile books, including the compilation of a dictionary of Chinese characters. Known as the Kangxi Dictionary, it is still in use today. He also commissioned a collection of poetry entitled Quan Tangshi. It remains the most extensive collection of Tang poetry, containing some 49,000 lyric poems by more than 2,000 poets.

Kangxi fell ill during the winter of 1722 and died on December 20. He named his fourth son, Yinzhen, as his successor. Yinzhen took over the throne and became the Yongzheng Emperor.

Kangxi is considered one of the most competent emperors in the history of China. He conquered Taiwan, established a treaty with Vietnam, gained control of vast territory from Russia, defeated the Mongols, conquered all of Sichuan, and secured the border with Tibet. Moreover, his reign led to one of the most extended periods of peace and prosperity in Chinese history.