The Beautiful Plum Lake in Taiwan 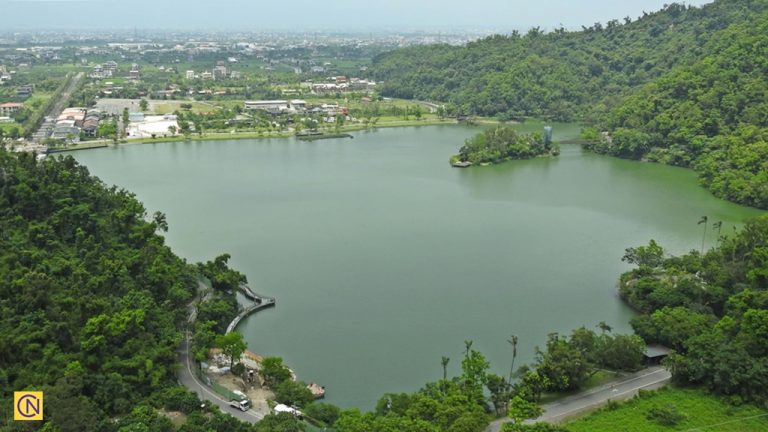 For more exciting images of the picturesque natural lake in Taiwan, please watch the following video:

Plum Lake was initially named “Dapi (大埤 Great Lake).” The lake used to be one of Lanyang’s 18 select scenic spots (蘭陽⼗⼋勝景), which was often referred to as “Autumn Moon in Mirror Lake” (鑑湖秋月).

Besides, it was depicted by the late County Mayor Chen Jindong (1907-1988) as a mirror lake in his poem; it was thus also called “Mirror Lake” in the early days.

In 1964, the late President Chiang Ching-kuo visited the area and was impressed with the beauty he saw there. So he renamed it Plum Lake, as the shape of the lake resembles a plum blossom with five petals.

There is a  peaceful and picturesque trail surrounding the lake. The course is about 4 km (2.5 miles) long, and it takes about 30-40 minutes to stroll along the path and enjoy the gorgeous scenery there.

It is fantastic to rent a single, tandem, side-by-side, 4-person pedal bike or a motorcycle to ride along the trail to explore the beauty of the lake. Visitors may spot cute birds and animals around the track, such as night herons, Taiwanese macaques, squirrels, civets,  etc.

Lake Heart Island (湖心島), also known as Feng Huang Island (鳳凰島 Phoenix Island), is a small island sitting in the middle of the lake. It provides visitors with impressive 360-degree views of the magnificent lake.

This small island is connected to the circular trail by a suspension bridge. The cute bridge was first built in 1970 with wooden materials, reconstructed with steel materials in 2005, and renovated in 2016.

A large flock of black-crowned night herons nest in the dense clusters of reeds in the water not far from the bank. Plum Lake has thus become a popular spot for avid black night heron watchers and photographers in northern Taiwan.

When walking along the trail, visitors may spot an unattractive stone bearing a single Chinese character under the lush trees on the bank of the lake. However, since this character was inscribed in cursive script, it is difficult for most visitors to read. The character inscribed in the cursive script is none other than Tiger (虎).

According to an ancient Chinese proverb, the Dragon controls the clouds while the Tiger controls the wind (雲從龍, 風從虎). Tiger inscriptions were erected to guard against evil and bring peace and good luck to local people.

The boulder inscription that bears the single character Tiger is the Huzi Monument (虎字碑). The one erected at Plum Lake was made in the seventh year of the Tongzhi Reign of the Qing Dynasty (同治七年, 1868). Another similar Tiger inscription is located along the Caoling Old Trail in Yilan County’s Toucheng Township, which is listed as a third-class historic site.

Located on top of the hill on the eastern side of the lake is the magnificent Sanqing Temple (三清宮), where over 50 deities are enshrined and worshiped. It is a magnificent structure built in traditional Chinese architectural style and was first built in1970.

Sanqing Temple is the most famous Taoist temple in Taiwan. It takes about 15 minutes to walk from the lake’s circular trail to the temple. The temple is also a perfect location for overlooking the entire Meihua Lake and Lanyang Plain.