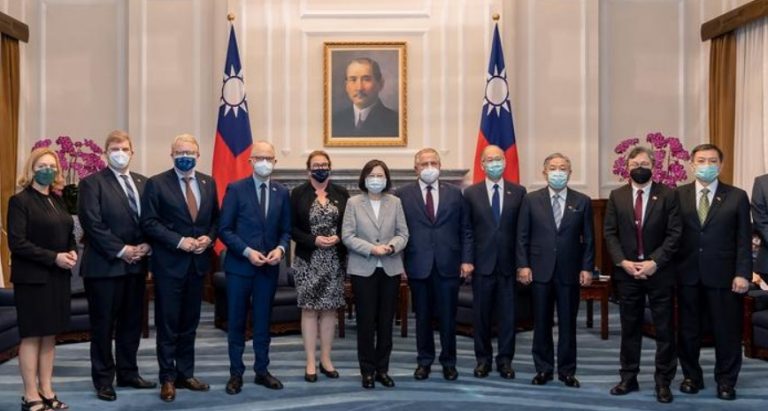 A delegation of six German lawmakers arrived in Taiwan for a five-day official visit and met the island's president, Tsai Ing-wen. (Image: via Office of the President, Taiwan)

One does not just symbolically show support for Taiwan without the risk of antagonizing China. Or, more specifically, infuriating Beijing like Germany’s Parliamentary visit to Taiwan did recently, when a delegation of 6 German lawmakers met with Taiwan’s President Tsai-Ing Wen on Monday, October 3.

The group from Germany arrived the day before and planned on staying for five days. However, China, known for its soft power over Taiwan, didn’t take the official German visit lightly. It quickly showed its displeasure as the China embassy in Berlin accused German lawmakers of making “irresponsible remarks” about Taiwan’s independent status.

In an unusual stance, Klaus-Peter Willsch, chair of the German-Taiwan Parliamentary Friendship Group, said China’s threats against Taiwan were unacceptable. Like other democracies governed by a legal system, Germany justifies its actions and policies based on ethics, morals, and the rule of law.

In light of 6 German parliamentarians visiting Taiwan and given China’s reaction, you may wonder what international law they broke to receive such a response. To understand the geopolitics involved here, you would have to look beyond the rationale of law and legalities. Some in Beijing may be aware that the Chinese regime has a big image problem — one that is rooted in its past.

According to Shaomin Li’s book The Rise of China, Inc.: “The Chinese Communist Party Transformed China into a giant corporation,” based on the most significant advantage it (seemingly) has over other (democratized) countries — its “low human rights.”

It’s essential to consider this when trying to understand why the Chinese Communist Party (CCP) would have an issue with a nation like Germany showing symbolic support for Taiwan. Shaomin Li stated in The Rise of China, Inc.: “China’s legal system is not about the rule of law.”

What is China’s legal system, then?

When Mao reigned (1949-1978), also referred to as the Maoist Period, the government took a hostile position against formalizing its legal system.

It makes sense since the Chinese Communist Party (CCP) “saw the law as creating constraints upon their power.” Under that guise, any attempt to formalize their legal system into something governed by ethics, morals, and laws was considered a counter-revolutionary move. A legal system in a democratized nation would oppose Mao and his Cultural Revolution, seeing it as a coup attempt. This is nothing new and familiar knowledge today.

To understand why China would have an issue with a country like Germany showing symbolic support for Taiwan, you need to consider the different legalities that drive the political affairs of a democratic nation like Germany versus those that drive a totalistic regime like China.

If seen in the context of an institution rooted in the Maoist period and based on the paroles and philosophy of communism, Beijing’s reaction is not surprising. Beijing has been trying to unite Taiwan into its type of legal system and mentality for decades now, using more obvious pressure and sometimes less obvious tension.

Beijing sees a country like Germany and its legal system as a “counter-revolutionary institution.” Because, in the minds of its Communist Party members, they are still on a mission to complete a revolution that started several decades ago.

In the 1950s, Chinese leaders attempted to adopt a socialist legal system like the Soviet Union, but the undertaking failed. At that time, China didn’t formulate a formal structure for a legal system.

From the 1980s on, based on a policy that Deng Xiaoping and the CCP put into place called the “open door” policy, China became more practical in its use of law and the reconstruction of its social structure and legal system. In this utilitarian approach, the legal system is portrayed outward on the geopolitical stage as a “useful tool” to support economic growth.

In other words, to be considered viable business partners and attractive to the world, Beijing adopted a practical approach to what may be regarded as the Chinese legal system.

After several decades of development and adaptation to the global geopolitical landscape, China found ways to comply. It found a way to use international laws in a way that was useful to its external dealings and economic growth while maintaining its ruling system internally.

This may also explain how a country can seemingly exist with a double standard regarding business, economic growth versus human rights, and geopolitical relationships.

Rubbing knees under the table

So suppose you were to wonder why China is upset that Taiwan’s president officially allowed Germany’s lawmaker delegation to visit. What is at play here is not a matter of legalities, but ideological indifference.

On top of the table or economically, Germany and any other nation doing business with China see it as a proper (utilitarian) partner and highly valuable. However, when seen from under the table or ideologically, Germany opposes China’s ruling party and its human rights violations.

This also explains why morals and ethics regarding human rights have been such a controversial topic that no one has been able to discuss with China rationally.

In other words, China wants Taiwan to be one with the mainland, and a legal or territorial context does not simply govern this position. It goes deeper and includes everything that also goes on under the table. However, Taiwan has consistently shown no intention of participating in what is happening underneath the table in China.

Thus, the German delegates’ most recent official visit to Taiwan has sent out a symbolic message. A statement that unquestionably would make anyone in China’s position feel antagonized.

Even though there is no official diplomatic relationship between Germany and Taiwan, Taiwan is Asia’s fifth most respected German trading partner. Just last year, bilateral commerce in goods between the two was more than €20 billion (US$19.78 billion).

However, China views it as the right to self-govern democratic Taiwan as part of its territory. And as China’s representative at the UN vowed, it would annex it by force if necessary.

Beijing also frequently opposed official contact between Taipei and other countries and, as our most recent example shows, is trying to stop any international recognition of the island. The visit by German representatives to Taiwan must seem like a wooden flock to Beijing’s mission and vision regarding Taiwan.

On the one side, the chair of the German-Taiwan Parliamentary Friendship Group, Klaus-Peter Willsch, compared Beijing’s stance regarding Taiwan’s geopolitical relationships to what is currently happening between Russia and Ukraine.

“In Europe, we have been experiencing a big neighbor invading a small neighbor and trying to impose its will with the military force since February 24,” he said, referring to Russia’s invasion of Ukraine.

“We do not consider it acceptable that a neighbor threatens you with military force to be forced into unwanted cooperation,” he said. “The German Bundestag is clear in its rejection of that.”

But on the other side, Noah Barkin, managing editor of the New York-based independent research outfit Rhodium Group’s China practice, said: “Berlin doesn’t want its interactions with Taiwan to jeopardize its economic ties with China,” according to DW.

“There is little appetite in Berlin for a forward-leaning approach to Taiwan that might be seen as provocative in Beijing,” he underlined.

But before anyone thinks that Germany is sending a subliminal message to Beijing, there is one final thing to be considered. Germany has little reason to want to lean forward and agitate Beijing. The German Bundestag has been sending delegates to Taiwan for a while now. And they most probably will continue to do so. Also, China is Germany’s largest trading partner.

However, in September 2022, German Economy Minister Robert Habeck said: “Naivety towards China is over.” He also pledged to rethink Germany’s trade relations with China to reduce dependency on Chinese goods and significantly consider human rights.

If we dig deep and consider historical events and how they transform into current ones, we can often better understand the inner workings of what’s happening and why it’s happening. But most importantly, we take a step back and analyze the situation instead of just reacting to what is happening. That way, we avoid reacting and can act based on our moral judgment and ethical standards.