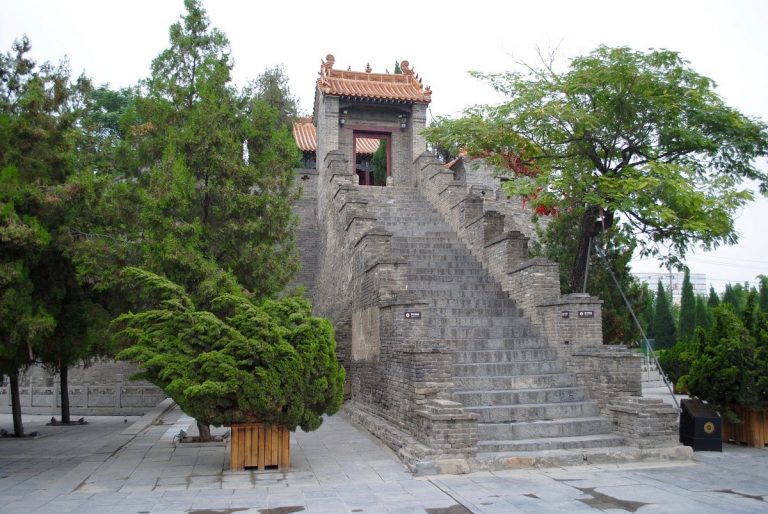 The 33 steps to the Rising Immortal Platform. (Image: via Public Domain)

In what is now nearly-forgotten history, Japan invaded China in 1937, more than two years before the official start of World War II in 1939, when Germany invaded Poland.

In the early morning of June 1, 1938, as fighting between Japan and China escalated, a company of Japanese invaders attacked Luyi County, Henan Province. As they entered an area approximately one mile from the town, the Japanese soldiers observed two relatively tall buildings in the city, one in the southeast and another in the northeast corner. They decided to bomb these two strongholds, believing they were military fortifications.

No explosions were seen or heard

Taking careful aim, Taro Umekawa first shot and destroyed the Kuixing Tower (Chief Star Tower) in the southeast corner of town. Next, the Japanese released bombs on the building in the northeast corner. But unlike the first building, after several rounds of artillery, no explosions were seen or heard. Confused, the soldiers fired shots into the county to ensure that their weapons were working correctly, resulting in regular blasts.

They proceeded to fire another 12 rounds of artillery at the northeast building, but not a single sound was heard. Finally, exasperated, the squad leader personally fired a cannonball at the facility; however, there was still no sound. A total of 13 rounds were fired without any result.

The army decided to head to Luyi County to investigate the building firsthand. After climbing to the top, they were surprised to find the Taoist sage Lao Tzu enshrined. The terrified Japanese soldiers couldn’t help but exclaim: “This is China’s ancestor showing us his spirit is here!” They all hurriedly knelt in front of Lao Tzu’s statue and kowtowed to apologize.

Luyi County is believed to be the hometown of Lao Tzu. The building in the northeast corner of the city that the Japanese tried to bomb was named Sheng Xian Tai (Rising Immortal Platform or Venerable Sovereign Platform). According to legend, Lao Tzu flew to Heaven from here. During the Song Dynasty (960-1279), the Emperor posthumously named Lao Tzu “The Heavenly Lord of Dao.”

The unique platform measures 42.6 feet (13 meters) high and has a base covering 916 square yards (765 square meters), while the temple has a total of 33 steps that lead from ground level up to the main hall, and it is here that a bronze statue of Lao Tzu is enshrined. In addition, inscriptions, iron pillars, and other sacred objects are located in the building’s courtyard.

A phenomenon that defies human explanation

Following the attack, it was discovered that bombs hit the east wall of the main hall and the back wall of the east side hall. In addition, one bomb struck cypress tree branches near the east hall, two bombs penetrated through a roof of the main entrance, and one bomb struck a roof beam. Amazingly, a bomb also landed on the shrine in front of the statue of Lao Tzu but caused no harm.

Just as incredible, two small halls sit behind the structure’s main entrance, and at the time, the Chinese kept one of the small halls filled with gunpowder. If it had detonated, the destructive power would have been massive.

Yet, despite all of this, the structure remains firm to this day.

When construction workers were repairing a collapse at the southwest corner of Lao Tzu Platform in 2003, they discovered a rusted Japanese bomb casing. The bomb was dug out and later detonated. In all, 13 bombs have been recovered without incident.

So what does this failure of the 13 bombs tell us? Why was Chief Star Tower blown up while Lao Tzu Platform remained intact?

Is all this accidental? Or, if viewed through another lens, could it be that there are divine beings controlling things in human society?

If you pay close attention, perhaps you’ll find other such phenomena that defy human explanation, letting you know that miraculous events can indeed occur in the world.