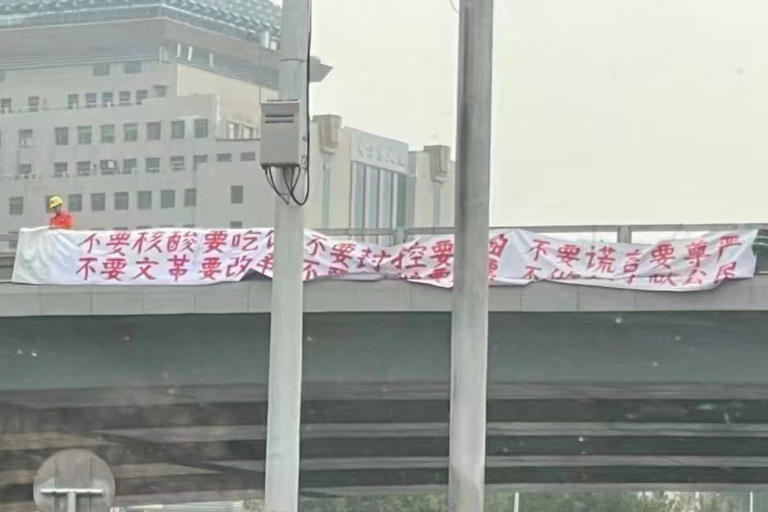 On October 13, a large banner calling for the removal of Xi Jinping was seen at Sitong Bridge in Beijing. (Image: jajia via Twitter)

A banner called for the removal of ‘dictator’ Xi Jinping

On the morning of October 13, two large white banners with red Chinese characters appeared high up on the Sitong Bridge in Beijing. One read: “We don’t want more (COVID) nucleic acid tests, but food! No more lockdowns, but freedom! No more lies, but dignity! Reform, not regression! Elections, not dictatorship! We want to be citizens, not slaves!” And another read: “Go on strike, students and workers! Remove dictator Xi Jinping.”

Professor Cai Xia tweeted that she had already received a private message from a media source informing her the brave protester, who went by the name “Peng Zai Zhou” on Twitter, was a science and technology worker named Peng Lifa.

Voice of America reported Professor Cai Xia as saying: “Three years after the outbreak of the pandemic, the ‘zero-COVID’ policy carried out by Chinese authorities has almost brought the entire country’s economy, the society, and people’s livelihood to a standstill. Chinese people are very strong as well as patient, but now they seem to have reached their limit. It is inevitable that brave people like Peng Lifa would stand up and fight.”

Professor Cai Xia commented: “In the past, we have seen people in cities and towns outside of Beijing resisting the zero-COVID policy and the lockdowns. But this time it happened in Beijing.”

“As for this incident in Beijing, I think it has shocked the whole country. Anyone who finds out about it, and in particular the high-level officials of the CCP, are most shocked by it. I don’t think this is a trivial issue.”

Professor Cai Xia said she was very worried about the safety of the brave protesters who would come forward at this time. She hoped the international community and the whole world would pay attention to the incident and help minimize the brutal persecution this protester is likely to face at the hands of the Chinese authorities.

“We (Chinese people) have lived in China for many years and we know how ruthless the regime can be. They are inhumane and there is no bottom line to their cruelty.”

“We are especially worried about those brave protesters (such as Peng Lifa). We don’t know what will become of him. We hope that people and the governments in the western democratic world can help him and reduce the harm done to him by the authorities,” she said.

Wang Dan, one of the leaders of the June 4th student movement in 1989 in China, praised Peng Lifa and called him “the new tank man”.

On October 15, current affairs commentator Qin Peng said in his program “Daily Chat of Current Affairs ” that the Chinese Communist Party continues to work hard on blocking free speech. According to information from some insiders at WeChat, more than one million WeChat accounts were permanently banned overnight due to the banner incident in Beijing. However, it proved to be a futile gesture as the incident had become big news around the world and many Chinese people now know about it. Many people are paying attention to the issue.

Qin Peng said that this incident had actually shattered Xi Jinping’s emperor dream, as being an emperor requires popular support from the people. Former Chinese communist leader, Mao Zedong, said: “Political power grows out of the barrel of a gun.” In the past, the Chinese Communist Party (CCP) was able to use threats of violence mixed with propaganda to stay in power, but today, no one actually sincerely obeys Xi Jinping. Qin Peng said that he had always said that Xi Jinping would never complete his next five-year plan in his third term. The CCP has lost the hearts of the people and no government in that position can maintain its power for long.