The Stunning Longdong Bay in Taiwan 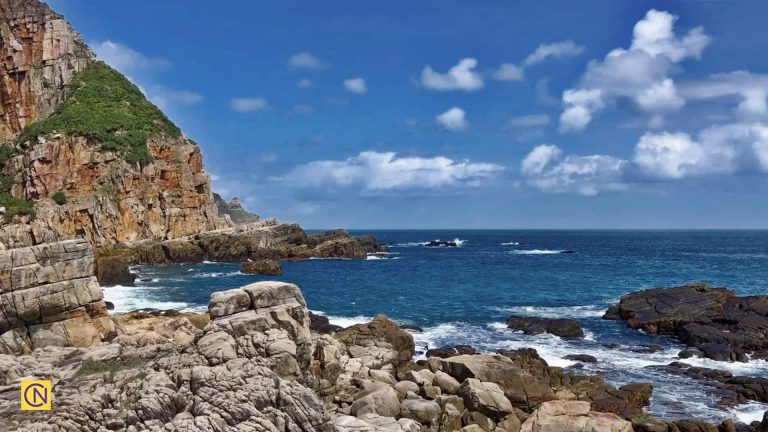 Located in the Gongliao District of New Taipei City in northeast Taiwan, Longdong Bay is the largest bay on the northeast coast. It is a popular attraction famous for snorkeling, scuba diving, and rock climbing. It is listed as one of the Seven Natural Wonders of Taiwan by a famous website known as Wandering Educators.

For more exciting images of the picturesque natural bay in Taiwan, please watch the following video:

Longdong literally means dragon cave (龍洞). It is a picturesque bay naturally formed by the geological movement of the Northeast Coast about 35 million years ago. As its name suggests, the shape of the coastline resembles the body of a giant dragon crouching on the coast, and there is a large sea cave at the foot of the steep cliffs along the coastline.

There is also a 1.2-mile (2-km) scenic trail that connects Longdong Bay and the nearby Bitou Cape. Along the trail, there are some viewing platforms that allow visitors to take a rest and enjoy the stunning cliffs that look like beautiful golden and gray walls.

Along the coastline, there is a series of dramatic sea-eroded sandstone formations. They formed from sediment in the ocean millions of years ago, and then were uplifted due to the collision of the Eurasian and Philippine plates. These interesting rock formations are similar to those in northern Taiwan’s Keelung City, such as Yehliu Geopark, Heping Island Park, etc.

Stretching about 2 kilometers (1.2 miles) along the seacoast, not only is Longdong Bay the best and biggest natural rock climbing site in Taiwan, but also one of the premier sea-cliff climbing destinations in the world.

The cliffs in this rock-climbing site are the sturdiest of all. They are sedimentary “Szuling sandstones (四稜砂岩)” formed about 50 million years ago, which are perfect for rock climbing.

This cliff climbing site offers roughly 500 climbing routes, from easy to difficult. Therefore, it is suitable for beginners, amateur climbers, and professionals.

Clear water and rich marine ecology coupled with perfect natural barriers make Longdong Bay the most popular diving site in northern Taiwan. This area is basically divable all year round, except when there are large swells, especially during the monsoon season in winter. However, the primary dive season at Longdong is from May to September, as the ocean can be relatively chilly during other periods of time.

Because the depth of water in this area ranges from 5 meters (16 feet) to over 25 meters (82 feet), it is an ideal destination for anyone who wishes to admire the beautiful fish and coral reefs. It is said that over 80 percent of the divers in Taipei had their first diving experience or got their diving certification at Longdong.