Lessons on Love and Respect After Donating to a Beggar 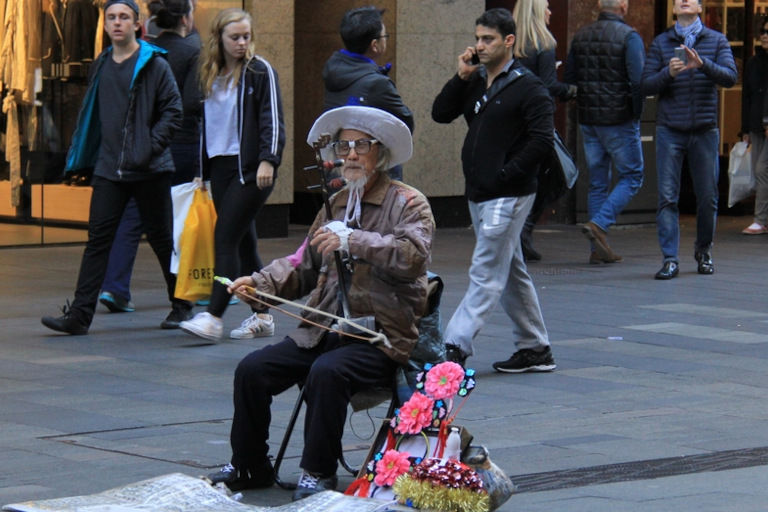 The man was sitting on the side of the road playing the erhu with an old bowl in front of him with a few coins in it, and it looked like he was rarely given any money. (Image: Arun Bhargava via Dreamstime)

After dinner one evening, my father took me on a walk to the park. Little did I realize that he would teach me about love and respect that evening. On passing a street corner, I saw a middle-aged man in rags sitting on the side of the road playing the erhu, music that could be said to be rather bad. He had an old bowl in front of him with a few coins in it, and it looked like he was rarely given any money.

My father stopped, stood and listened for a while, and then said to me: “We’ve heard the music he’s playing, shouldn’t we pay him? You can take some money over.”

I took a coin, walked up, and threw the coin into the old bowl, where it flipped a few times and then settled calmly in the vessel. The middle-aged man kindly said “thank you” to me.

As if I had been praised by my teacher, I was so happy that I felt the many people behind me casting approving glances. So I hurriedly ran back to my father, awaiting his admiration of our good deed.

To my surprise, my father did not affirm this, but said to me with a thoughtful look: “Son, how did you give him the money?”

I replied: “I threw the money into his bowl, it made a chiming sound, and then the beggar smiled and said ‘thank you.'”

Father said: “Throwing the money is disrespectful toward him; you should not have done that.”

I did not understand what my father said, so I asked: “Dad, isn’t he just a beggar?”

My father stroked my head and said: “Not really. You see, he is not asking us for money. He is making money by playing his music. To give, we should give the money politely; otherwise, it’s best not to give anything. Do you understand the difference?”

All people should be treated with respect

My father was saying that even if he is a beggar, we should treat him with respect because he is first of all a human being like us.

“Respect toward the weak is actually showing respect for oneself.”

I understood what my father had meant. I took another coin, walked to the bowl, bent down, and put the money in. After that, I came back, took my father’s hand, and walked away thoughtfully.

During that evening, my father told me several “giving to the needy” stories.

The president of an American company was walking home from work. When he came across a disabled veteran selling pencils on the side of the road, he threw down a few coins and hurried on his way.

However, he didn’t get very far when he suddenly walked back to the veteran, bent down, took some pencils, and said: “I apologize. You’re selling these pencils and I shouldn’t have treated you that way.”

A famous Chinese writer was writing at home when he came across a beggar outside his door. Because he couldn’t find any immediate money, the writer bent down and held the beggar’s dirty hand and said: “Friend, I have no money for the time being; I will send some to you another day.”

The beggar said with great gratitude: “Friend, your handshake is the best alms I could want. Thank you!”

It turns out that love for your fellow man is not charity, nor is it pity. Love needs you to give with an equal attitude. The moment you can bend down and show some respect is the moment when love is truly given.