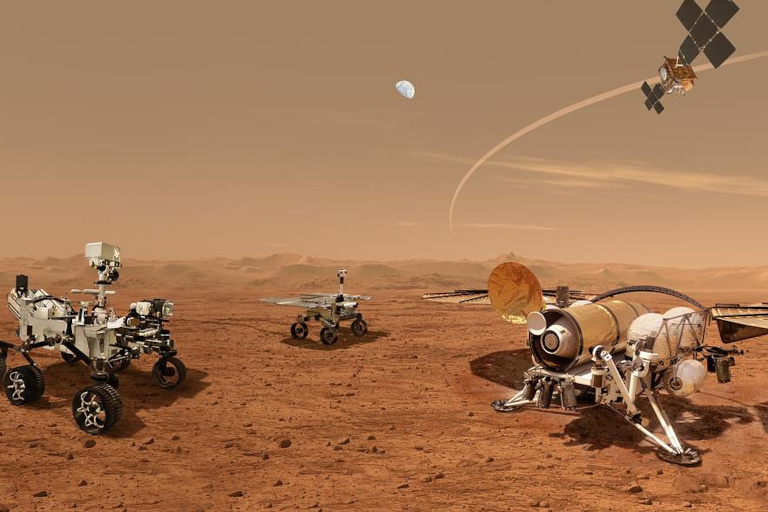 This illustration shows a concept for a set of future robots working together to ferry back samples from the surface of Mars collected by NASA's Mars Perseverance rover. (Image: ESA / JPL-Caltech via NASA)

NASA’s Perseverance rover will establish the first sample depot on Mars. The next step in the unprecedented campaign to return scientifically selected samples from the planet was made on October 19 with a formal agreement between NASA and its partner ESA (European Space Agency). The two agencies will proceed with the creation of a sample tube depot on Mars. The sample depot, or cache, will be at “Three Forks,” an area located near the base of an ancient river delta in Jezero Crater.

The samples will be carefully selected

This cache will contain samples from carefully selected rocks on the surface of Mars — these can help tell the story of Jezero Crater’s history and how Mars evolved, and could perhaps even contain signs of ancient life. Scientists believe the cored samples from the delta’s fine-grained sedimentary rocks — deposited in a lake billions of years ago — are the most likely to contain indicators of whether microbial life existed when Mars’ climate was much different than what it is today. Thomas Zurbuchen, an associate administrator for science at NASA Headquarters in Washington, said:

“Never before has a scientifically curated collection of samples from another planet been collected and placed for return to Earth. NASA and ESA have reviewed the proposed site and the Mars samples that will be deployed for this cache as soon as next month. When that first tube is positioned on the surface, it will be a historic moment in space exploration.”

The cache of samples — a duplicate set of the collection that Perseverance will retain on board — is one part of a robust plan to ensure mission success. The Perseverance rover will be the primary means to convey these to the Mars launch vehicle as part of the campaign. The Three Forks depot will serve as a backup, hosting the duplicate set. David Parker, ESA director of Human and Robotic Exploration, said:

“Choosing the first depot on Mars makes this exploration campaign very real and tangible. Now we have a place to revisit with samples waiting for us there. That we can implement this plan so early in the campaign is a testament to the skill of the international team of engineers and scientists working on Perseverance and Mars Sample Return. The first depot of Mars samples can be considered a major de-risking step for the Mars Sample Return Campaign.”

The first step in the campaign is already in progress. Since Perseverance landed at Jezero Crater on Feb. 18, 2021, the rover has explored 8.2 miles (13.2 kilometers) of the Martian surface and collected 14 rock-core samples during its first two science campaigns. In the course of its first science campaign, the rover explored the crater’s floor — a former lakebed — finding igneous rock, which forms deep underground from magma or during volcanic activity at the surface. The second science campaign has been highlighted by the investigation of sedimentary rocks, formed when particles of various sizes settled in the once-watery environment.

The rover has also collected one atmospheric sample and three witness tubes. Witness tubes contain material that helps identify potential terrestrial contamination in the tubes that may have come from the rover during sampling operations. Perseverance project scientist Ken Farley of Caltech in Pasadena, California, said:

“While a significant mission milestone will have taken place once those tubes are dropped, it doesn’t mean Perseverance explorations or sample collection has concluded — not by a long shot. Next, we’ll be headed up to the top of the delta to an area that from satellite imagery appears geologically rich, performing science investigations and collecting more rock cores. Mars Sample Return is going to have a lot of great stuff to choose from.”

In another important milestone, the Mars Sample Return Program entered the Preliminary Design and Technology Completion Phase, known as Phase B, on Oct. 1. During this phase, the campaign focuses on completing technology development, engineering prototyping, assessments of software and heritage hardware, and other risk-mitigation activities.