The Intriguing Story About How Pumpkin Spice Got Into Our Lattes 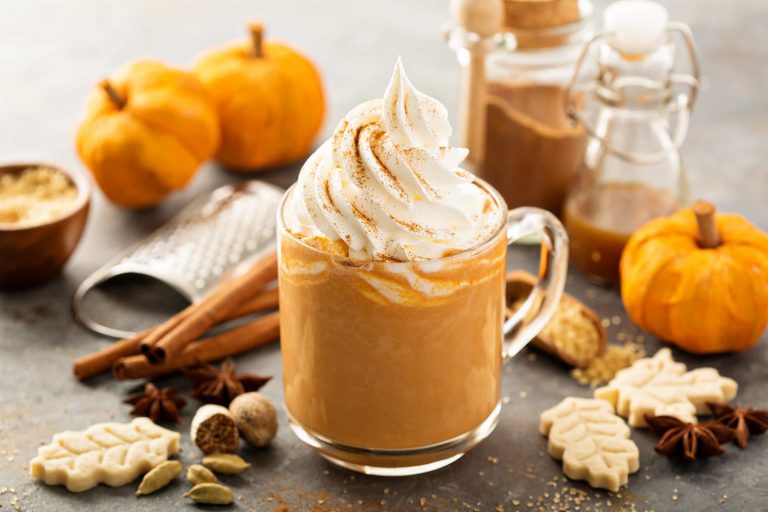 Pumpkin spice lattes appear on coffee shop menus in September and November. The Starbucks drink, launched in the fall of 2003, is well-known to most people. However, pumpkin spice has a long and illustrious centuries-old history intertwined with coffee’s history even before it became the official drink of the season.

Where did the pumpkin spice latte originate? Let us find out.

What is pumpkin spice?

Pumpkin spice does not include any pumpkin. Instead, the spice mix of cinnamon, ginger, nutmeg, and allspice gained its name from its historical usage in pumpkin preparations. (Cloves and mace are occasionally added as well.) These various spices, some from very different corners of the world, somehow came together to form the combination we enjoy.

A word about pumpkin spice

Guiliano posted a blog article in 2015 on the origins of the five pumpkin spices listed above. “All five ‘pumpkin’ spices have a history in the Indonesian archipelago known as the Moluccas (Maluku in Indonesian),” he says. “These were known as the ‘Spice Islands’ in antiquity because they were the source of spices.”

Spice traders traveled via Yemen and the Port of Mokha, where coffee was first manufactured for commercial use in the 15th century, as one of the earliest examples of cross-cultural commerce. Guiliano said coffee was exchanged for pumpkin spices during this time.

“Until the twentieth century, coffee was regarded as a type of spice; in fact, The Spice Mill was the first trade newspaper dedicated towards the coffee trade in the United States since spice and coffee dealers were thought to be the same thing,” he continues.

What may pumpkin pie spice be used for?

For millennia, people have urged using pumpkin spice in non-pumpkin cuisine. Spice producer McCormick, according to Harrison, published recipes for pumpkin pie spice that had nothing to do with pumpkin pie.

“We have a 1960s Chicken ‘N’ Yam Skillet Supper recipe,” she explains. “Our packaging in the 1970s encouraged spreading it on everything from buttered toast to applesauce and yams.

“With the water boiling in the dellàl, he puts in his fine coffee powder, el-Bunn, and removes the pot to allow it to continue to simmer. He next chooses a clove head, a little cinnamon or other spice, bahar, and braies them, tossing their dust in afterward.”

However, savory uses for pumpkin spice stayed on. It might be because of the cinnamon. Cinnamon is used in several tasty dishes, including the Vietnamese noodle soup pho, which includes cinnamon as one of the main ingredients in its delicious broth.

However, cinnamon is most commonly associated with sweetness in the United States. Cinnamon rolls, cinnamon apples, and snickerdoodle cookies are a few examples, although it’s uncommon to see cinnamon in savory American or Western European food.

Pumpkin spice has made it to your neighborhood Trader Joe’s and Starbucks. In addition, it has crossed the world, from hidden islands, to Dutch shortbread, to British mixed spice, to the New World.

Some people may roll their eyes when they hear about the newest pumpkin spice product, but the spice combination has captured our hearts (and a permanent place in our spice cabinets).

This simple homemade pumpkin spice mix gives fall flavor to baked products, lattes, roasted veggies, dessert toppings, and more. This 4-ingredient pumpkin pie spice recipe creates enough for one pie, but you can easily double it to have it on hand. The new spice mix should be stored in an airtight container.

Simply combine the cinnamon, nutmeg, ginger, and cloves in a small bowl.

How to preserve it

Homemade pumpkin spice should be stored the same way as any other spice blend: Keep it in a small, well-sealed container in a cool, dark place. It may be safely stored for up to three years.

Voila! Enjoy your homemade pumpkin spice with your favorite latte.