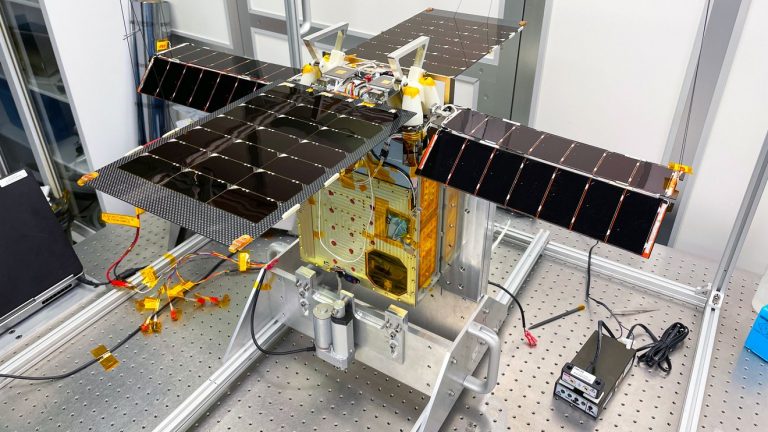 Earlier this year, NASA’s Lunar Flashlight mission underwent tests to prepare it for launch in November 2022. The solar-powered small satellite is shown here with its four solar arrays extended in a Georgia Tech clean room. (Image: JPL-Caltech via NASA)

Set for a November launch, the small satellite mission will use lasers to search for water ice inside the darkest craters at the Moon’s South Pole. It’s known that water ice exists below the lunar regolith (broken rock and dust), but scientists don’t yet understand whether surface ice frost covers the floors inside these cold craters. To find out, NASA is sending Lunar Flashlight, a small satellite (or SmallSat) no larger than a briefcase.

Swooping low over the lunar South Pole, it will use lasers to shed light on these dark craters — much like a prospector looking for hidden treasure by shining a flashlight into a cave. The mission will launch aboard a SpaceX Falcon 9 rocket in mid-November. John Baker, the mission’s project manager at NASA’s Jet Propulsion Laboratory in Southern California, said:

“This launch will put the satellite on a trajectory that will take about three months to reach its science orbit. Then Lunar Flashlight will try to find water ice on the surface of the Moon in places that nobody else has been able to look.”

After launch, mission navigators will guide the spacecraft way past the Moon. It will then be slowly pulled back by gravity from Earth and the Sun before it settles into a wide, looping, science-gathering orbit. This near-rectilinear halo orbit will take it 42,000 miles (70,000 kilometers) from the Moon at its most distant point and, at its closest approach, the satellite will graze the surface of the Moon, coming within 9 miles (15 kilometers) above the lunar South Pole.

SmallSats carry a limited amount of propellent, so fuel-intensive orbits aren’t possible. A near-rectilinear halo orbit requires far less fuel than traditional orbits, and the Lunar Flashlight will be only the second NASA mission to use this type of trajectory. The first is NASA’s Cislunar Autonomous Positioning System Technology Operations and Navigation Experiment (CAPSTONE) mission, which will arrive at its orbit on Nov. 13, making its closest pass over the Moon’s North Pole. Barbara Cohen, Lunar Flashlight principal investigator at NASA’s Goddard Space Flight Center in Greenbelt, Maryland, said:

“The reason for this orbit is to be able to come in close enough that Lunar Flashlight can shine its lasers and get a good return from the surface, but to also have a stable orbit that consumes little fuel.”

As a technology demonstration, the Lunar Flashlight will be the first interplanetary spacecraft to use a new kind of “green” propellant that is safer to transport and store than the commonly used in-space propellants such as hydrazine. This new propellant, developed by the Air Force Research Laboratory and tested on a previous NASA technology demonstration mission, burns via a catalyst, rather than requiring a separate oxidizer. That is why it’s called a monopropellant. The satellite’s propulsion system was developed and built by NASA’s Marshall Space Flight Center in Huntsville, Alabama, with integration support from Georgia Tech Research Institute in Atlanta.

The Lunar Flashlight will also be the first mission to use a four-laser reflectometer to look for water ice on the Moon. The reflectometer works by using near-infrared wavelengths that are readily absorbed by water to identify ice on the surface. Should the lasers hit bare rock, their light will reflect back to the spacecraft, signaling a lack of ice. But if the light is absorbed, it would mean these dark pockets do indeed contain ice. The greater the absorption, the more ice may be at the surface.

It’s thought that molecules of water come from comet and asteroid material impacting the lunar surface, and from solar wind interactions with the lunar regolith. Over time, the molecules may have accumulated as a layer of ice inside “cold traps.” Cohen said:

“We are going to make definitive surface water ice measurements in permanently shadowed regions for the first time. We will be able to correlate Lunar Flashlight’s observations with other lunar missions to understand how extensive that water is and whether it could be used as a resource by future explorers.”

Cohen and her science team hope that the data the Lunar Flashlight gathers can be used to understand how volatile molecules, like water, cycle from location to location and where they may accumulate, forming a layer of ice in these cold traps. Roger Hunter, Small Spacecraft Technology program manager at NASA’s Ames Research Center in California’s Silicon Valley, said:

“This is an exciting time for lunar exploration. The launch of Lunar Flashlight, along with the many small satellite missions aboard Artemis I, may form the foundations for science discoveries as well as support future missions to the Moon’s surface.”