Fateful Stand-Off Between the Emperor and the Fortune Teller 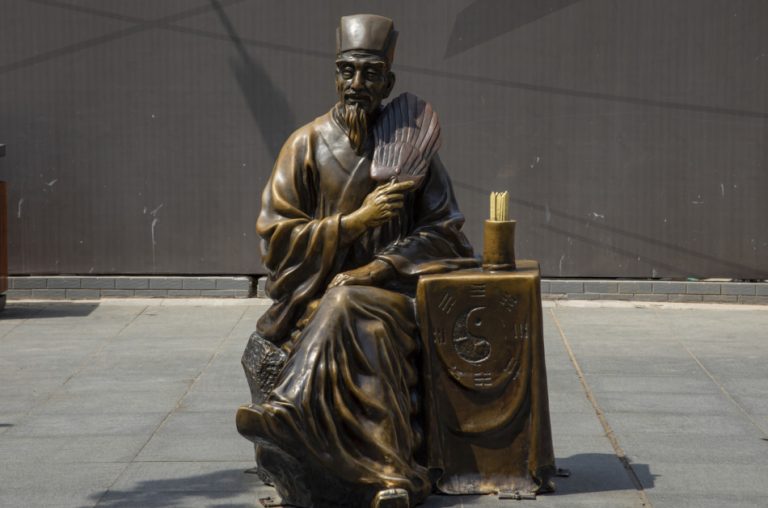 Is it possible that a fortune teller's ability is so good and accurate that he can predict, despite everything, whether a man has the fate to become a high-ranking official or not? (Image: Karen Foley via Dreamstime)

Is it possible that a fortune teller’s ability is so good and accurate that he can predict, despite everything, whether a man has the fate to become a high-ranking official or not?

The autumn of the second year of Emperor Zhengde (1507) was the year of the imperial examinations of the Ming Dynasty. The scholars bid farewell to their parents, wives, children, and hometowns, flocking to the capital from all over the country, hoping to pass the exam and become an official.

Astrologers, diviners, and one fateful fortune teller gather at the gateway of the capital

In the meantime, those working on astrology and divination in the capital also appeared in the market. First, the diviners set up stalls at the gateway to the capital, providing testees with readings about their future.

To solicit business, they all blew their trumpets to show their capability Self-proclaiming that even if an official in plain-clothes came to seek advice from the fortune-tellers, they could immediately tell the official’s ranking and when and where he rose from the gutter. They proved successful every time. So every stand had a vast number of customers.

Emperor Zhengde (Wuzong in the Ming Dynasty, Zhu Houzhao) heard many capable diviners emerging in the capital. So he dressed as a scholar, taking several attendants with him, and he secretly went to divination stalls to observe and listen.

Suddenly, a man roared at one stall, grasped a prognosticator’s collar, and said indignantly: “You ruined my future. I must fight with you!” Many onlookers tried to mediate between the two parties, but a long time passed and they still failed to separate them.

For unbecoming behavior, the Emperor decides to teach the scholar a lesson

On seeing this commotion, Emperor Zhengde was very displeased, thinking that the testee’s behavior was inappropriate, so he decided to teach him a lesson. He stopped pretending to be a scholar, ordered his guards to separate the two, and asked: “Why are you quarreling with each other for so long?”

The fortune teller replied: “A few days ago, this man consulted me about whether he would pass the imperial exam. I told him that he would be the number-one scholar on this test. However, he didn’t enter the exam room to take the exam and instead slandered me that I destroyed his future. What a stupid bookworm!”

“You said that I would win the top place. So many friends and relatives came to congratulate me in advance. Unfortunately, being out of control and drinking too much, I overslept. When my family woke me up, the test-hall gate had been closed. Did you ever see any testee outside the test hall pass the imperial exam? So didn’t you devastate my future? Otherwise, who else did it?” the candidate said.

But each stuck to his argument, and neither could convince the other.

After hearing this, Emperor Zhengde said impatiently: “Stop arguing! If somebody sends him into the exam hall to take the exam, but he fails to attain the title you predicted, what punishment will you accept?”

The predictor said: “You can gouge out my eyes.” The Emperor warned: “Don’t go back on what you said!” He immediately asked someone to take a pen and paper from the stall desk, wrote a note, stamped it with a small jade seal he carried, and ordered his attendants to escort the candidate to enter the exam room.

The Emperor told the diviner: “I will come to verify what you said half a month from now.” He then went back to the palace.

Emperor Zhengde tells the diviner that his prophecy is meaningless

Emperor Zhengde said to the diviner: “As the imperial exam is a major national event, how is it possible for a warlock to promise anything? You promised he would get the number-one scholar position on the test, but I will not allow it. I will see what else you can say.

Furthermore, that testee is all too arrogant. He regards it as easy to pass the imperial exam. He believes that the first place should belong to him just from the say-so of a diviner, indicating how ignorant and incompetent he is. Now, I gave him one more chance, but I wonder whether he will be able to face his hometown’s elders when he fails the exam.

Even if he passes the exam, I will not select him then. Instead, I will see whether he dares to consult prognosticators again about his future. Therefore, I sent the candidate to the test hall.”

The diviner makes his escape

As the fortune teller saw the scene that just had happened, he knew the visitor was no ordinary individual. Therefore, even if the testee got the title, he would inevitably be kicked off the diviner’s list.

However, due to being overconfident about his prophecy in advance, there was no room to turn around. Therefore, after Emperor Zhengde and his guards left the market, he packed up his stand and escaped.

The Emperor allows the scholar to sit the imperial examination

The Imperial Guards directly brought the candidate outside the test hall according to the Emperor’s instruction and summoned the principal examiner, announcing: “Here is the imperial edict:” The gatekeeper immediately removed the seals on the gate, opened the lock, and led the examinee and the attendant. They carried the imperial decree to meet the primary examiner.

Then, inside and outside the palace, rumors had been spread that the Emperor had sent one of his friends into the exam room. The primary examiner sincerely believed this also and paid particular attention to the candidate’s exam paper.

After finishing the test, the principal examiner picked up the examinee’s answer sheet and reviewed it personally. However, it turned out that there was nothing special about the candidate, and the answers could only be described as “average.”

But he was the person sent into the exam hall by the Emperor. If it were a general relationship, the Emperor wouldn’t do it. So the primary reviewer talked it over with other examiners: “The Emperor handpicked this candidate. Thus, we cannot place him second and go against the Emperor’s will.”

All the appraisers agreed and the examinee came first in the highest imperial examination.

Stranger than fiction twist of fate

After publishing a list of successful candidates, the principal appraiser reported in person to the Emperor. He tried his best to flatter the Emperor, praising the candidate’s talent and congratulating the Emperor on getting an excellent pillar of the state. After hearing his flattering words, Emperor Zhengde laughed and exclaimed: “It’s destined — a predestined fate!”

The primary examiner felt confused about what the Emperor said, but the Emperor understood it, thinking: “You knew nothing about it! That candidate had nothing to do with me. I sent him into the exam hall because I wanted to make fun of the diviner and simultaneously teach the testee a lesson.

I didn’t even plan to let him pass the exam! However, coincidentally, a stunning beauty in these last few days made me forget about the imperial exam. Otherwise, I wouldn’t let him pass the exam even if that candidate were talented and knowledgeable. However, currently, he has won the first scholar place in the test. So wasn’t it a predestined fate?”

Because of this, Emperor Zhengde thought highly of that predictor, who was capable of such an accurate prophecy. Therefore, he immediately dispatched the imperial guards to the stall to look for that diviner, but he had disappeared.