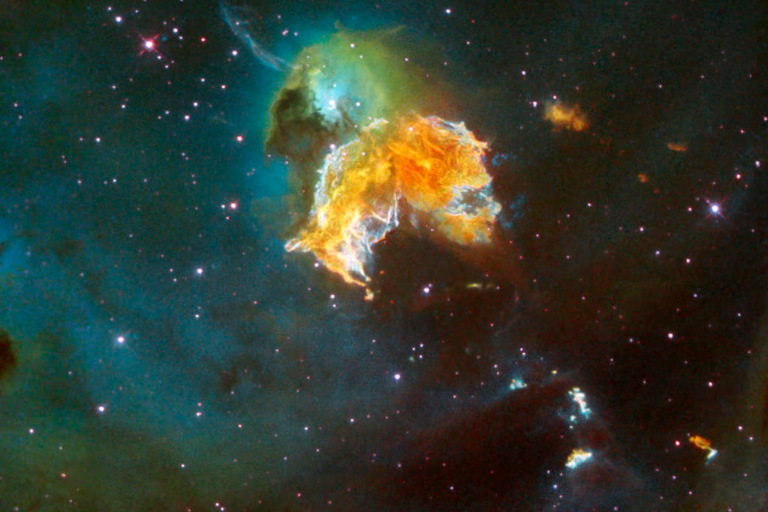 When a star explodes (a supernova), it sends its intense burst of light out in all directions. On rare occasions, in the months and years that follow, rings of light or ‘light echoes’ spread out from the original supernova position. (Image: The Hubble Heritage Team (STScI/AURA) via NASA / ESA /HEIC)

When a star explodes (a supernova), it sends its intense burst of light out in all directions that have been captured in telescope images. However, on rare occasions, in the months and years that follow, rings of light or “light echoes” spread out from the original supernova position. This is described in a recent paper in Astrophysical Journal Letters based on observations with the Hubble Space Telescope (HST) by a collaboration of astronomers from Dublin, Barcelona, Aarhus, New York, and Garching.

Light echoes from a supernova explosion

The scientists merged the HST images in a short gif video, showing first the supernova explosion at the very center, followed by light rings which appeared when light from the explosion hit various layers of dust in the vicinity. Lead scientist Professor Maximillian Stritzinger of Aarhus University, Denmark, said:

“The data set is remarkable and enabled us to produce impressive colored images and animations that exhibit the evolution of the light echoes over five years. It is a rare phenomenon previously only documented in a handful of other supernovae.”

“While the James Webb Space Telescope has drawn much attention, its predecessor, Hubble, continues to provide incredible images of the universe. Over three decades, HST has been observing the sky, so we can find things like this light echo that evolve slowly over many years.”

“The blast wave from this powerful supernova explosion is racing outwards at over 10,000 kilometers per second. Ahead of this blastwave is an intense flash of light emitted by the supernova, and this is what is causing the expanding rings we can see in the images. Supernovae are interesting as these cosmic explosions produce many heavy elements such as carbon, oxygen, and iron, which make up our galaxy, stars, and planet.”

“A good everyday analogy is to imagine the finale of a fireworks show – the bright burst of light from a shell at the end of the show will light up the smoke from earlier shells still lingering in the area. By comparing a series of photographs taken over several minutes, you could measure all sorts of information that is not directly related to the most recent explosion that is lighting up the scene, things like how many shells had previously exploded, how opaque the smoke from a given shell, or how fast and in what direction was the wind blowing.”

The supernova in question, SN 2016adj, was first seen in 2016 and belonged to the well-known peculiar galaxy Centaurus A, situated between 10 and 16 million lightyears from Earth. For five and a half years, astronomers watched the area around the supernova after it slowly faded. Centaurus A is full of dust lanes. When the sideways spreading light from the supernova hit these dusty areas over time, they lit up further and further away from the original supernova position, creating a series of expanding rings of emission called light echoes.

The variations in these rings during the years of observation enable researchers to probe the layout of the dust lanes in the galaxy near the explosion. The data suggests that they consist of columns of dust with large holes in between, resembling a chunk of Swiss cheese. Professor Stritzinger said:

“Centaurus A is a huge elliptical galaxy. These are mostly quiet, dust free, and without younger stars prone to go off as supernovae, but Centaurus A is different. It is a strong radio astronomical source and contains prominent dust lanes with new stars forming within. This is a sign that it has ‘recently’ gobbled up another smaller spiral galaxy, and matters have not yet settled down, as they might in a couple of hundreds of millions of years. Observing the development of these light echoes will help us gain more insight into these violent galaxy collisions.”

Up to now, four distinct light echoes produced by four different dust sheets have been observed. The team, which includes Dr. Ferdinando Patat, European Southern Observatory, Garching, Germany, plans to follow up on the observations with the HST in the future, hoping that more light rings will emerge. Furthermore, obtaining a spectrum of the light echoes might be possible, showing the spectrum of the underlying supernova.

Provided by the University College Dublin [Note: Materials may be edited for content and length.]