How Can Locusts Sniff Out Human Cancer? 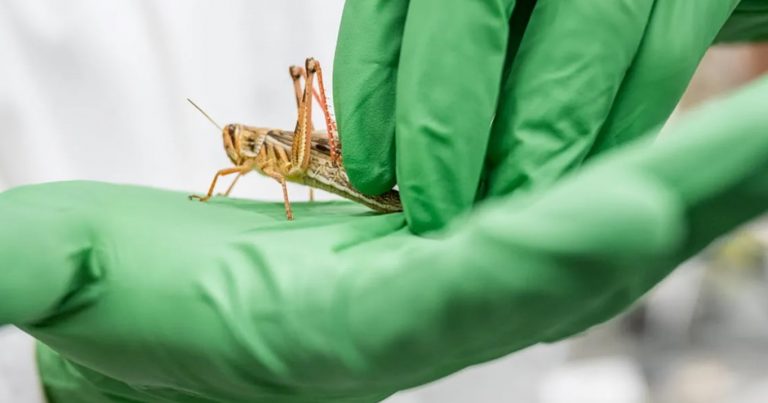 With their antennae and neural circuitry, locusts can differentiate myriad odors, including those released by cancer cells. Researchers are tapping into the insects’ brains to take advantage of that for early detection. (Image: Derrick L. Turner via MSU)

Yes, you heard it right. Locusts can detect human cancer.

A recent study by Michigan State University (MSU) found that locusts can reliably detect various human cancers by fragrance. Not only can the insects “smell” the difference between healthy and sick cells, but they can also distinguish distinct cancer cell lines.

These findings pave the way for devices that use locust sensory neurons to detect cancerous cells early by analyzing biomarkers in a patient’s breath.

While many people are used to using technology to supplement their natural senses, such as a telescope or microscope, scientists say there is no alternative for the nose. Dogs, for example, are still used to detect drugs and explosives. In more recent scenarios, so-called diabetic alert service dogs are trained to detect health disorders such as low blood sugar.

According to a university news release, “noses are still cutting-edge,” says Debajit Saha, an assistant professor of biomedical engineering at MSU. “There is nothing like these when it comes to gas detection.” He added.

Scientists have been attempting to build technology that can duplicate the sense of smell for years. Still, more is needed to prove capable of replicating the sensitivity and specificity of traditional biological olfaction.

“For more than 15 years, people have been working on electronic noses, but they are still nowhere near what nature can accomplish seamlessly,” Professor Saha explains.

Cancerous and healthy cells act and grow differently, releasing various chemicals. These cancer-related compounds are detected in a person’s breath if they penetrate their lungs or airways.

“In theory, you could breathe into a gadget, and it would recognize and discriminate between various cancer kinds and disease stages.” “However,” Professor Saha notes, “such a gadget is not yet clinically ready.”

As a result, the MSU research team went in a different direction. They preferred to let nature do the work rather than constantly striving to imitate biology. Researchers think that by beginning with answers perfected by nature and millennia of evolution, they are basically “hacking” the insect brain to use it for illness detection.

How will it work?

Patients do not need to be concerned about locusts infiltrating their physicians’ offices. Instead, the researchers hope their findings may open the way for devices that employ insect sensory neurons to identify cancer in its early stages using only a patient’s breath.

Although such devices are unlikely in the short term, the study’s authors believe they are not as far-fetched as they appear.

Part of this is due to people’s increasing dependence on technology to supplement or replace their natural senses. Telescopes and microscopes, for example, are uncovering hitherto unexplored worlds.

However, because planned technologies are so powerful, it is easy to overlook the performance of our natural tools, particularly the sense organ, immediately in front of our eyes.

Why are locusts used?

Locusts, like fruit flies, have long functioned as model organisms in the scientific community, according to Professor Saha and his colleagues.

Modern study has a good understanding of their olfactory receptors and associated brain activity. Furthermore, locusts are bigger and stronger than fruit flies.

According to the researchers, these qualities make locusts perfect study subjects. On a more practical level, the researchers observed that attaching electrodes to locust brains was simple.

The insects’ reactions to gas samples generated by healthy and malignant cells were subsequently recorded.

The signals were then utilized to construct chemical profiles of the various cells.

In 2020, Professor Saha led a similar research project at Washington University in St. Louis. He was working on creating bomb-detecting technology employing locusts at the time.

Although the scientists concentrated on oral cancers, they believe this technique may be used for any disease that delivers compounds into the breath, including most malignancies.

They want to build portable sensors that can evaluate volatile cancer biomarkers before other, more intrusive tests can identify the disease by exploiting information recorded from locust brain activity.