What Is Bubble Tea and Where Did It Originally Come From? 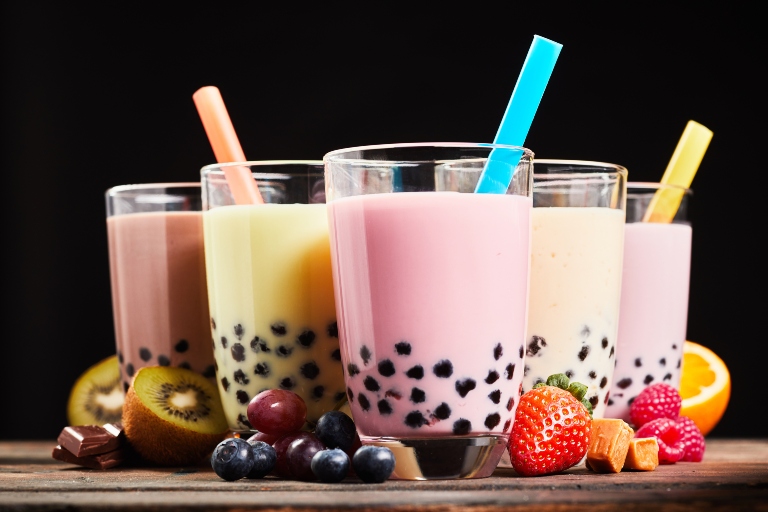 Bubble tea is a cool, refreshing, sweet drink with tapioca pearls. It is also known as pearl milk tea (珍珠奶茶 zhenzhe nicha), boba drink, and boba milk tea (波霸奶茶 boba nicha). It was created in Taichung, Taiwan, in the 1980s. “Bubble” refers to the milk froth generated after shaking the cup. At the same time, “boba” symbolizes the tapioca pearls, which originates from a Taiwanese slang term for “big breast” or “big-breasted female.”

Initially, the tapioca pearls used in the tea were relatively small compared to the many different sizes used nowadays. Tapioca pearls can be brownish-blackish, white, pink, yellow, or green. Bubble tea may also have coconut jelly or sweetened jelly cubes of konnyaku, a traditional Japanese health food.

Bubble tea shops sometimes use a sealing machine to put a flat cellophane top over the lip of the cup to prevent spillage until the customer pierces the sealed top with a straw. The drink may also be served with a dome-shaped plastic lid. One of the obvious traits of bubble tea is the fat straw that facilitates sucking up the tapioca pearls.

Bubble tea is to Taiwan what coffee or soda is to the United States, and shops appear to occupy every street corner in Taiwan. It has also spread all over the world. According to CNN’s Travel website, this drink was ranked 25th among the world’s 50 most delicious drinks.

Some key players in Taiwan’s bubble tea industry have expanded globally. Among them are ChaTime, which has over 1,000 stores worldwide; Quickly, which operates over 2,000 stores on four continents; Gong Cha, with over 1,000 shops; and CoCo Fresh, which has expanded operations to Asia, South Africa, and North America.

Easy Way International Co. Ltd., which has over 1,200 shops in such countries as the Philippines, Malaysia, the U.S., Australia, New Zealand, South Korea, China, Japan, and others, had a turnover at a tea shop in Tokyo’s Akihabara District on the opening day of over 350,000 yen (US$3,000).

According to the Central News Agency (CNA), the Taiwanese company BoBoQ set up its first bubble tea operation in Germany in 2010 and currently has over 100 shops across Europe and the Middle East. Furthermore, McDonald’s in Germany, which added the popular drink to its menu at its 800 locations, offers the beverage in 250 possible flavor combinations.

Bubble tea is one of the most delicious drinks in the world, and the wide variety of types makes it a symbol of Taiwan’s vibrant and diverse culture.