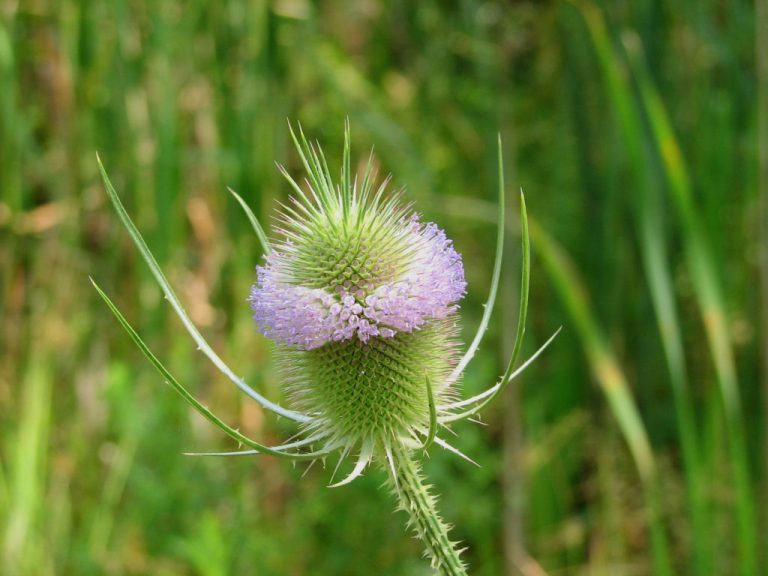 Teasel (Dipsacus sylvestris) is a flowering plant similar in appearance to the lilac, with long cylindrical flowers. (Image: via Wikipedia)

The common teasel (Dipsacus fullonum) is currently found in most states in the United States. Native to Europe and temperate Asia, the common teasel may have been introduced to North America as early as the 1700s. The plant can reach a height of five feet and bears small fruits that resemble nuts.

Teasel root has long been used for its medicinal properties. The roots are dug up in summer, usually July and August, and cleaned, with the fibrous material and dirt removed. The roots are then cut into slices and dried in the sun before being used in herbal preparations.

The root has been used for centuries in traditional Chinese medicine to address joint, tendon, and connective tissue ailments. It is said that teasel root was named xuduan after its effects, as discovered by a young man. According to legend, it was noted that a long time ago, a kindhearted Chinese herbalist always helped poor patients by giving them free treatments or free medicine.

Join Deb to learn about her knowledge and experiences with magnificent teasel:

Accordingly, he was highly respected by many. One day, as he was passing through a small village, he saw a child lying on the ground and a lady crying. The lady told the herbalist the child was her son and that he was dead. The herbalist checked the child’s pulse and said he was still alive.

He then took out a bottle of herbal tablets and placed some in the child’s mouth. Hours later, the child regained consciousness. By the time a month had passed, he had fully recovered. In this village, a powerful and wealthy man operated a herb shop.

This man always monopolized the herb business in the village. After he heard the story, he tried to convince the herbalist to give him the tablets, but the herbalist always declined. Finally, the man was so angry that he sent two big, strong men over to beat up the herbalist, which resulted in the herbalist’s legs being broken. Then they threw him onto the mountain.

Fortunately, a young man found the wounded herbalist. The herbalist asked this young man to pick a herb for him. The herbalist used this herb to treat his broken legs. A couple of months later, his legs had healed entirely.

Before he left the village, he taught the young man how to help the villagers heal broken bones by using this herb. The young man named the herb xuduan, which means “reconnect broken parts.”

Teasel root can be used internally or externally. Internally, teasel root treats pain and weakness in the knees and lower back and helps repair damaged tissues such as bones and ligaments. Externally, it can be combined into a poultice with Drynaria (basket ferns) and dragon’s blood (a bright red resin of several plant genera) to reduce swelling and relieve pain.