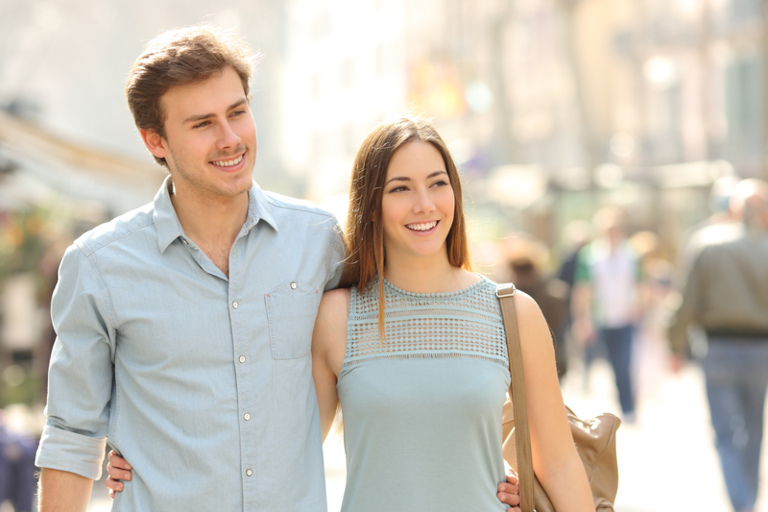 A couple avoids disaster by taking a break from their argument and offering help to an elderly lady in need. (Image: Antonio Guillem via Dreamstime)

An act of kindness can impact a person’s fate. This is a scene captured by a roadside surveillance camera. A young couple was standing under a telephone pole, arguing violently with each other.

Just as they were arguing, an elderly woman crossed the street carrying fruit. Before she reached the curb, her bag broke and the fruit was scattered all over the place. The couple was so caught up in their argument that they didn’t notice the elderly woman at all.

As the couple continued to argue, the woman wanted to leave, but the man grabbed her, not letting her go. The moment the woman broke away from the man, she turned around and saw the elderly lady. From the video, it seemed that the elderly lady had a problem with her back. She could not bend down to pick up her things and just stood in place, looking helplessly at the scattered fruit.

When the young woman saw her difficulties, out of kindness she turned away from the man to help pick up the fruit. The man, having failed to keep his hold on the woman, waved his hand angrily and tilted his head to the side. From his body language, he seemed to be saying: “Go ahead, do whatever you want. I don’t care about you anymore!”

The woman squatted down and helped the elderly lady pick up the fruit. The man watched his girlfriend do that, and even though he was still angry, he walked over resentfully to help them out, too. As soon as he turned away from the pole, a large advertising box instantly fell to the ground and landed right where the man had been standing.

Hearing the loud crashing sound, the young woman stopped picking up the fruit and stood up in shock, covering her mouth in surprise. The loud sound also shocked the man who immediately stopped in his tracks. He looked back and saw the advertising box that had fallen to the ground, stunned and dumbfounded.

The man froze in place, and when he came back to his senses, he walked straight to the elderly lady, hugged her, and kissed her forehead. If she had not appeared on the scene and dropped the fruit, the falling advertising box could have brought him fatal injuries.

An act of kindness can change a person’s fate

When people are in a heated argument, it is as though their fate can change at a moment’s notice. Because of the kindness of the woman who helped the elderly lady, the man was also drawn in to help them. Even though he was still angry, his own kindness arose and he went to help someone in need. This act of kindness helped him to avoid a disaster at a critical moment when his life was at stake.

There was another similar incident. One day, a mother and daughter stood arguing in front of a cosmetics store. Perhaps the cosmetics the mother bought were not the brand the girl wanted. The girl threw the product on the ground and stood angrily under a street sign, clasping her hands to her chest with an expression that refused to compromise in any way. Nearby bystanders cast strange glances, seeming to condemn the girl.

Just then, an elderly lady passed by. She suddenly lost all her strength and collapsed to the ground, muttering: “Who has something sweet? I need some glucose.” In all the commotion, someone called an ambulance and someone else tried to help her. The girl dashed away from the street sign, took off her backpack, took out a packet of raisins, and helped the elderly lady eat them, giving her some mineral water from time to time.

The elderly lady’s blood sugar level was too low, making it difficult to sustain her strength. The raisins in the girl’s backpack helped her to stay conscious at this critical moment.

After the ambulance pulled away with the elderly lady, the crowd was ready to disperse. At that moment, an ear-splitting emergency braking sound cut through the air. The driver of a garbage truck suddenly lost control of the vehicle which ran onto the sidewalk and knocked down the street sign. The whole iron pole along with the signage fell to the ground. It was the same spot where the girl had just been standing.

The girl came back to her senses and ran to her mother, hugging her and whimpering. The girl’s character may have been imperfect, but her good deed of helping to save a human life allowed her to avoid a possible disaster.

Similar scenes happen almost every day. Admittedly, people are imperfect, but human kindness and good deeds in helping others help weed out the flaws of humanity and improve the quality of life. There is an ancient Chinese saying: “If you do good, Heaven will be satisfied.” It is really true.

Translated by Eva, edited by Trisha