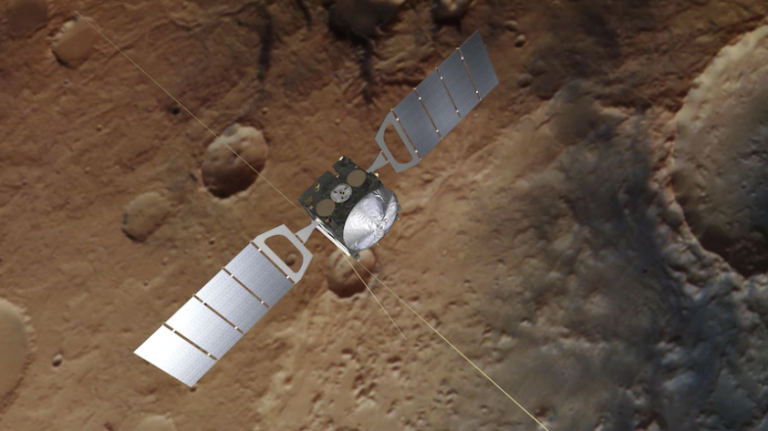 The experiment was measured by the MARSIS, an instrument on the European Space Agency's Mars Express spacecraft. (Image: via University of Southern Queensland)

It may be known as a rocky, red planet, but the evidence is mounting that salty water exists at the base of polar deposits on Mars. University of Southern Queensland‘s Professor Graziella Caprarelli is part of an international team investigating bright reflection signals below the Martian surface, first spotted in data acquired between 2010 and 2019 by the radar sounder MARSIS on board Mars Express.

The primarily Italian team proposed that the reflections pointed to a patchwork of salty lakes, publishing their research in Science in 2018 and in Nature Astronomy in 2021. Recently a new collaboration between the Italian team and US-based researchers provided new evidence further corroborating this interpretation. The results of these studies have been recently published in the prestigious journals Nature Communications and the Journal of Geophysical Research Planets. Professor Caprarelli said new laboratory experiments and simulations have ruled out alternative interpretations, adding:

“We’ve explored questions such as ‘is it possible that the strong radar signals could be produced by other types of materials like clays or saline ice, or by constructive interference.’ The latest papers address the long-standing question related to the temperatures at the base of the south polar cap: thus far, these were considered to be too low even for brines to be liquid.”

Professor Caprarelli, who is an adjunct with the Centre for Astrophysics of the University of Southern Queensland, and who developed the thermal models and calculated the range of temperatures at the base of Mars’s south polar cap, beneath the South Polar Layered Deposits (SPLD), said:

“We decided to study the physical properties of the deposits themselves, by modelling the propagation of the radar waves through water ice and dust.”

The new calculations constrain the percentage of dust inclusions in the deposits to be between 5 and 12 percent, further setting an upper limit of 230 K (-43°C) for the temperature at the base. Professor Caprarelli said:

“Our studies show that the temperature at the base of the SPLD computed thus far by other researchers (approximately 170-180 K) have been greatly underestimated, and can instead easily reach 200 K (-73°C) which is within range of the melting temperatures of perchlorate brines.

“New laboratory experiments conducted in the laboratories of Roma Tre University (Italy) and the Southwest Research Institute (USA) further demonstrate that the physical properties of brines at these revised temperatures are entirely consistent with the strength of the radar signals acquired from the base of the Martian south polar deposits.”

The research is the result of joint efforts among teams from several institutions spread over three continents: Roma Tre University, the University of Southern Queensland, the Southwest Research Institute, the Planetary Science Institute, the Institute for Electromagnetic Sensing of Environment of CNR (IREA-CNR) and the IRA-INAF (National Institute for Astrophysics, Bologna, Italy).

Provided by University of Southern Queensland [Note: Materials may be edited for content and length.]