The Dujiangyan Irrigation System, a Masterpiece of Hydraulic Engineering 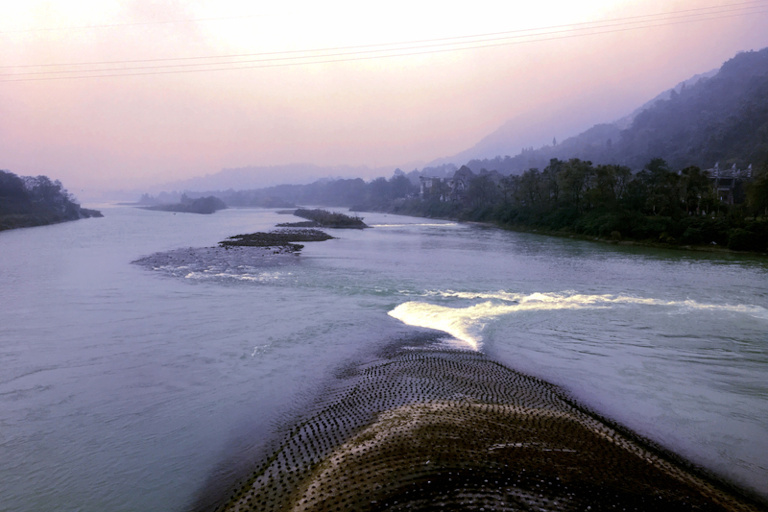 The flow of the Min river is split into two streams by the 'Fish Mouth Levee' at Dujiangyan in Sichuan, China. (Image: Lunfengzhe via Dreamstime)

There has been frequent flooding in mainland China recently, causing chaos everywhere. This makes us think of the Dujiangyan Irrigation System on the Western Sichuan Plain, which has been turning frequent flood damage into abundance and prosperity for the local people for more than 2,000 years. It is the longest-lasting hydraulic engineering project in history and is still irrigating the Western Sichuan Plain today.

Design concept based on ‘The Unity of Man and Nature’

The Min River (Minjiang) originates from the Min Mountains in the northern part of the Chengdu Plain. The high mountains and deep valleys along the river cause the water to flow rapidly. In the vicinity of Guanxian County, the volume of water becomes so large that it often bursts the embankments and floods the area.

The Dujiangyan system uses bamboo baskets loaded with stones to form a levee in the middle of the river. Instead of building a dam to block the water, the levee guides the flow of the river and separates the water into an inner stream and an outer stream. The inner stream eventually reaches the farmland and irrigates it.

In summer, when there is more water in the Min River, the Dujiangyan system deters the surging flood and raises the water level to make it flow over the Feishayan (Flying Sand Gate) at the end of the Baopingkou (Bottle-Neck Channel leading to the inner stream) created by the levee so that it joins the outer stream, thus regulating the amount of water that flows into the inner stream that leads to the farmlands.

This masterful piece of engineering coexists and harmonizes with nature and becomes a part of nature.

A shallow embankment was built in the middle of the Min River to divide the river into two streams — the inner stream and the outer stream. Because the embankment looks like a fish with its head facing upstream, people called its most forward part “Fish Mouth Levee” (Yuzui). Yuzui divides the water so that roughly 60 percent goes to the inner stream and 40 percent to the outer stream. The inner stream then flows down about one kilometer and reaches the “Bottle-Neck Channel” (Baopingkou). Baopingkou is a 20-meter-wide man-made channel that guides the water eastward to irrigate the Western Sichuan Plain.

Next, in order to further control the amount of water flowing into Baopingkou (Bottle-Neck Channel), the Feishayan (Flying Sand Gate) was built at the tail end of the Yuzui (Fish Mouth Levee) which acts as a spillway. When the water level of the inner stream is too high, the flood water will overflow through the Feishayan into the outer stream, thus protecting the farmland from flooding.

What has Dujiangyan taught us?

The ancient Chinese philosophy of “harmony between man and nature” is fully reflected by the Dujiangyan. The ancients believed in the life and spirituality of rivers, so they did not use engineering as a tool to change and control nature, but integrated it as a part of nature, and that is why the Dujiangyan system has been able to last for so long.

Today, Dujiangyan still stands. It is not only a precious gift left to us by our ancestors, but it also reminds us to cherish the traditional wisdom of our ancestors.