A Miraculous Event: Surviving a Shipwreck With the Help of a Divine Being 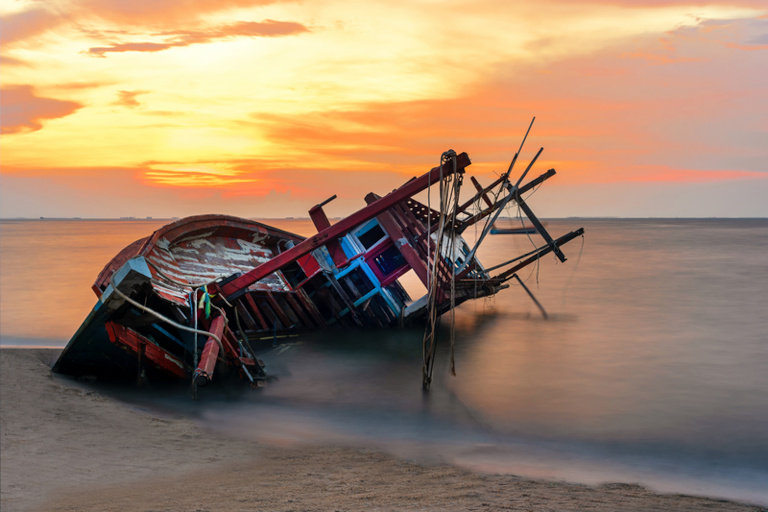 Here’s an ancient story of how one man survived a shipwreck with the help of a divine being. (Image: Wanida Prapan via Dreamstime)

Sometimes in life, inexplicable events occur — miraculous events that defy logic, and even our senses. Here’s an ancient story of how one man survived a shipwreck with the help of a divine being.

Embarking on a dangerous journey for profit

In the early years of the Tang Dynasty, in the city of Heyin, there lived a man named Song Juan. Song was very bright and passed the exam to become a scholar, winning a Mingjing Scholarship to study for his master’s degree.

Unfortunately, Song came down with a serious illness and had to stop his studies. When he realized he would be unable to continue with his education, he knew he had to find work to survive. After some searching, he found a job assisting the owner of a large salt company, a very profitable business in those times. Song earned 2,000 yuan per month, which was enough for him to marry a lovely woman named Yang and live a happy life, so he no longer considered switching to another profession.

More than a year later, a rice merchant with his ship of cargo was passing through the area on his way to the capital. Since he could not read or write, the merchant hoped that Song could take charge of the bookkeeping, and invited Song to assist him on his journey through the Three Gorges waterway to the capital. He promised to pay Song 8,000 yuan every month. Song said to his wife: “It would take me months to earn 8,000 yuan with my current job. If I go with this man I can earn four months’ salary in just one month! Where else could I find such a profitable job?”

Yang was a wise wife. When she heard her husband’s idea she said: “The Three Gorges is a very dangerous waterway. If you encounter danger or lose your life, what good is money?” But Song did not listen to his wife, and when the time came, he set off with the rice merchant.

Saved by the Vajra Sutra

As fate would have it, just as the men were passing through the Three Gorges, a violent storm developed, causing the ships on the waterway to capsize and be swallowed by the water.

Dozens of people were killed in the tragedy. Only Song was fortunate enough to survive, thanks to a bundle of corn husks he grabbed as he fell into the water. As Song clung tightly to the husks, they helped him slowly float to shore. When he realized that the husks had saved his life, he held the bundle in his arms and thanked it, saying: “You saved my life. I will keep you forever, and will never leave you behind!” Then he set out on the unknown road ahead.

After walking a few miles, Song came to a house where an old woman was selling tea. He told the woman about the shipwreck and his plight, and after hearing the story, she offered him a thatched room to spend the night in. The old woman was very sympathetic to his situation, and also prepared congee and rice to help him recover from hunger.

The next morning, as Song was drying his clothes on the south side of the house, he unpacked the soaked corn husks that he’d slept with all night, and to his surprise, discovered a bamboo tube inside. When he opened the tube he was further surprised to find that the tube contained the Vajra Sutra (Buddhist scriptures).

When Song told the old woman what he’d found, she said: “After you left on your journey, your wife sincerely copied this Sutra down with her whole heart for you. It saved your life.” Song was so moved that tears ran down his face. As he thought of his wife, and how stubborn he had been, he expressed his wish to return home and share this miraculous event with her.

Upon hearing this, the old woman pointed to a road in the southeast and said: “Follow this road for 200 hundred miles. You will arrive home the day after tomorrow.” She proceeded to give him two liters of rice for his journey, and after accepting it with thanks, Song set off for home.

The old woman who doesn’t exist

After two day’s journey, just as the old woman had said, Song Juan returned to his home in Heyin without any problem.

As soon as he saw his wife, Song ran over to hug and thank her. Surprised to see her husband so soon, Yang asked what happened. Song told her the whole story, but she was still confused. Just then, Song took out the book of scriptures, and upon seeing it, she was brought to tears.

Yang explained that, out of concern for her husband, she had copied down the Sutra after he’d left with the rice merchant. She sent the Sutra to monks at Huguo Temple. Later, after finding a mistake in the writing, she went to the temple to find it and make the correction. But when she went to look for it, it was nowhere to be found.

Amazingly, the very Sutra Yang had copied for her husband somehow ended up in her husband’s hands, saving his life. As he understood what an amazing event had occurred, Song became choked up and thanked his wife sincerely.

Song later said to his wife: “We cannot forget the old woman by the riverside who helped me.” So in order to repay her kindness, he sent a messenger to deliver tea and silk to her. But the house was nowhere to be found. The messenger asked some nearby children where he could find the house with the old woman selling tea, explaining that Song wanted to repay her kindness. One of the boys replied: “There is no house with an old woman, and no one sells tea. It must have been an illusion. Perhaps it was a Divine Being who helped.”

When he heard the story, Song knew it was indeed a Divine Being who showed him such compassion and helped him return safely home.

From that day forward, Song burned incense and worshiped the Vajra Sutra in the quiet of his room every day. Yang also read the Sutra every day, and they both lived upright lives to honor its teachings. Song’s son even burned incense every day to show respect for the Vajra Sutra, and a few years later, he was made an official in a high level position, earning 5,000 yuan a month.