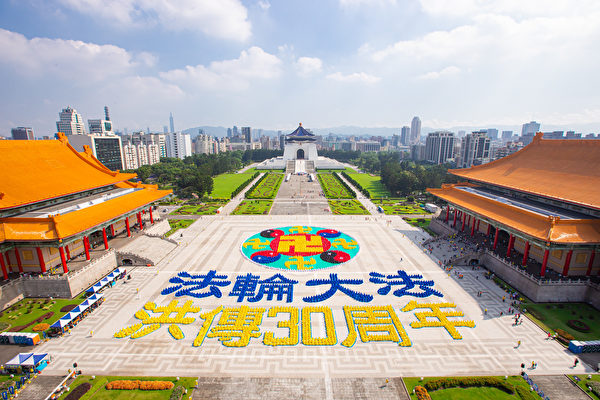 The 2022 Falun Dafa Character and Image Formation in Taipei, Taiwan on November 12, 2022. (Image: Chen Po-chou via The Epoch Times)

Over 5,000 Falun Gong practitioners gathered at the immense plaza between the National Concert Hall and the National Theater at Taipei’s iconic National Chiang Kai-shek Memorial Hall on November 12, 2022. Donning clothes in pre-arranged colors, they are only a portion of the Falun Gong followers across the nation. They were there to partake in the unique image and character formation commemorating the 30th anniversary of this spiritual discipline’s spreading worldwide.

For more images of the character and image formation in Taiwan, please watch the following video:

Falun Gong image and character formation activities were first held in China’s Guizhou Province in 1996 before the spiritual practice was outlawed by the Chinese Communist regime in July 1999.

Similar events have been organized outside China one after another since 2000. Among them have been those held in Taiwan, the United States, Indonesia, Australia, and some other countries.

The purpose of the event is to help the general public further understand the true facts about Falun Gong, while also raising awareness about the Communist regime’s atrocious persecution of Falun Gong practitioners in China.

Over the past 20 years or so, Taiwanese Falun Gong members have organized similar activities annually in Taipei, Taichung, Kaohsiung, Pingtung, and other major cities. The patterns and number of participants have differed each year according to the size of the squares, and the properties of the events.

The 2022 character and image formation

Falun Gong is also known as Falun Dafa, so the patterns of the formation this year included an image of the Falun (Law Wheel) emblem on the upper part, and eight Chinese characters and two Arabic numerals in the lower part, which read “Falun Dafa,” and “the 30th anniversary of spreading worldwide.”

To prepare for the event, the organizer used a computer to generate the layout of the patterns and calculate the number of participants needed according to the dimensions of the plaza. Prior to the event, over 100 practitioners in the greater Taipei area spent three days of hard labor drawing the contour of the patterns on the ground with plastic thread and tape in different colors.

A total of nearly 5,000 colored mats were manually taped to the ground to generate the patterns. To make the patterns on the ground appear as perfect as possible, they modified them time and again according to aerial photos.

On Saturday, these 5,000 participants gathered around the plaza by 8 a.m., according to the colors of the outfits they were wearing. At 9 a.m., they walked onto the designated locations inside the patterns from different directions in sequence, and then sat on the mats of the corresponding colors. It created a splendid view when seen from the platforms at the entrances of the two eye-catching national performance halls.

A Russian Ph.D. student surnamed Ianalieva, who is studying in Taiwan, and her boyfriend surnamed Klochkov, were amazed by the event. She said: “We are very impressed with the organization and scale. It is amazing that people united by the ideas of ‘Truthfulness, Compassion, and Tolerance’ have come together to tell the whole world about this. This is something that so many people lack right now. We are glad to get acquainted with this practice.”

Right after the image and character formation, thousands of the participants stood in lines at the plaza to demonstrate the five sets of peaceful and gentle exercises, including standing meditation, sitting meditation, and another three sets of slow-moving exercises.

Before the event wrapped up, the Falun Dafa Tian Guo Marching Band performed about 10 uplifting and inspiring songs at the Memorial’s Liberty Square. Their magnificent performance deeply impressed many visitors.

Falun Gong, also known as Falun Dafa, is a spiritual practice based on the universal principles of “Truthfulness, Compassion, and Tolerance.” This spiritual practice, which is rooted in Buddhist and Taoist philosophies, consists of two main components — self-improvement through studying the teachings and practicing the five sets of exercises.

The spiritual practice was first introduced to the public by Mr. Li Hongzhi in China’s Changchun City in 1992. Since then, Falun Gong has been taken up by tens of millions of people and is now practiced in over 100 countries around the globe.

The Chinese Communist regime launched an illegal, atrocious campaign to crack down on Falun Gong in 1999 due to this spiritual practice’s massive popularity, rapid growth, and outnumbering the CCP membership. Since then, thousands of practitioners have been tortured to death or died from organ harvesting, and tens of thousands of others have been detained without due process in prisons and labor camps.