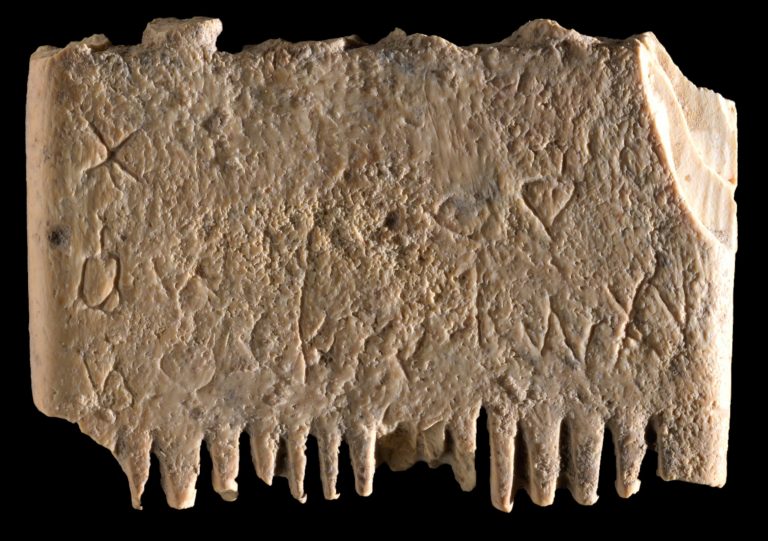 An ivory comb from around 1700 BCE includes an engraving, making it the first sentence ever found in the Canaanite language. (Image: Dafna Gazit via Israel Antiquities Authority)

The alphabet was invented around 1800 BCE and was used by the Canaanites and later by most other languages in the world. Until recently, no meaningful Canaanite inscriptions had been discovered in the Land of Israel, except for only two or three words here and there. Now, an amazing discovery presents an entire sentence in Canaanite, dating to about 1700 BCE. It is engraved on a small ivory comb and includes a spell against lice.

The comb was unearthed at Tel Lachish in Israel by a team from the Hebrew University of Jerusalem (HU) and Southern Adventist University in the United States, under the direction of Professors Yosef Garfinkel, Michael Hasel, and Martin Klingbeil. The inscription was deciphered by the Semitic epigraphist Dr. Daniel Vainstub at Ben Gurion University (BGU). The ivory was tested by HU Prof. Rivka Rabinovich and BGU Prof. Yuval Goren, and it was found to originate from an elephant tusk. Their findings were published in the Jerusalem Journal of Archaeology.

The letters of the inscription were engraved in a very shallow manner. It was excavated in 2017, but the letters were noticed only in subsequent post-processing in 2022 by Dr. Madeleine Mumcuoglu. It was cleaned and preserved by Miriam Lavi.

The ivory comb is small, measuring roughly 3.5 by 2.5 cm. The comb has teeth on both sides. Although their bases are still visible, the comb teeth themselves were broken in antiquity. The central part of the comb is somewhat eroded, possibly by the pressure of fingers holding the comb during haircare or the removal of lice from someone’s head or beard. The side of the comb with six thick teeth was used to untangle knots in the hair, while the other side, with 14 fine teeth, was used to remove lice and their eggs, much like the current-day two-sided lice combs sold in stores.

The inscription in Canaanite on the comb

There are 17 Canaanite letters on the comb. They are archaic in form — from the first stage of the invention of the alphabet script. They form seven words in Canaanite, reading: “May this tusk root out the lice of the hair and the beard.” Garfinkel said:

“This is the first sentence ever found in the Canaanite language in Israel. There are Canaanites in Ugarit in Syria, but they write in a different script, not the alphabet that is used till today. The Canaanite cities are mentioned in Egyptian documents, the Amarna letters that were written in Akkadian, and in the Hebrew Bible. The comb inscription is direct evidence for the use of the alphabet in daily activities some 3700 years ago. This is a landmark in the history of the human ability to write.”

Ancient combs were made from wood, bone, or ivory. Ivory was a very expensive material and likely an imported luxury object. As there were no elephants in Canaan during that time period, the comb likely came from nearby Egypt — factors indicating that even people of high social status suffered from lice.

The research team analyzed the comb itself for the presence of lice under a microscope and photographs were taken of both sides. Remains of head lice, 0.5-0.6 mm in size, were found on the second tooth. The climatic conditions of Lachish, however, did not allow the preservation of whole head lice, but only those of the outer chitin membrane of the nymph stage head louse.

Despite its small size, the inscription on the comb from Lachish has very special features, some of which are unique and fill in gaps and lacunas in our knowledge of many aspects of the culture of Canaan in the Bronze Age. For the first time, we have an entire verbal sentence written in the dialect spoken by the Canaanite inhabitants of Lachish, enabling us to compare this language in all its aspects with the other sources for it. Second, the inscription on the comb sheds light on some hitherto poorly attested aspects of the everyday life of the time, haircare and dealing with lice.

Third, this is the first discovery in the region of an inscription referring to the purpose of the object on which it was written, as opposed to dedicatory or ownership inscriptions on objects. Further, the engraver’s skill in successfully executing such tiny letters (1-3 mm wide) is a fact that from now on should be taken into account in any attempt to summarize and draw conclusions on literacy in Canaan in the Bronze Age.

Lachish was a major Canaanite city-state in the second millennium BCE and the second most important city in the Biblical Kingdom of Judah. To date, 10 Canaanite inscriptions have been found in Lachish, more than at any other site in Israel. The city was the major center for the use and preservation of the alphabet for some 600 years, from 1800-1150 BCE. The site of Tel Lachish is under the protection of the Israel Nature and Parks Authority.

Provided by Hebrew University of Jerusalem [Note: Materials may be edited for content and length.]