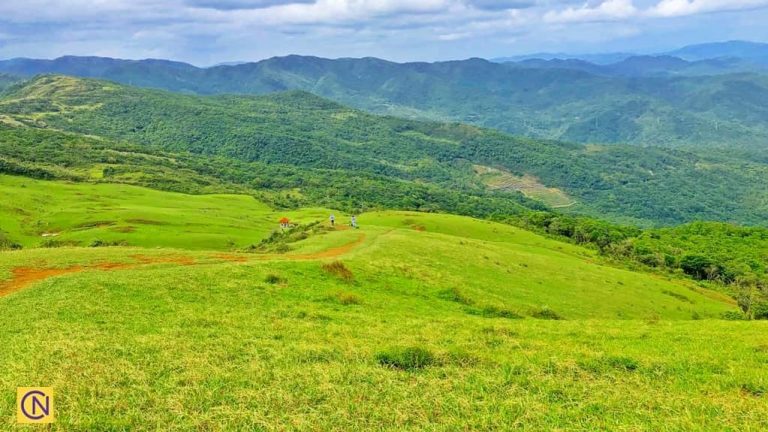 Referred to as the most beautiful grassland in northern Taiwan, Taoyuan Valley (桃源谷) is a popular attraction featuring picturesque grassland that stretches for about 3 kilometers (1.8 miles) along a beautiful sloped ridge in New Taipei City’s Gongliao District.

At the top of the grassy slope, visitors can take in the stunning 360-degree views of Taiwan’s Northeast Coast, the famous Turtle Island (龜山島) in the Pacific Ocean, and the spectacular scenery of the mountains around.

Situated at an elevation of 554.7 meters (1,817 feet), Taoyuan Valley used to be a forest. Nevertheless, continuous grazing for a long time has resulted in the disappearance of the trees there. Instead, it has become the immense grassland it now is.

Besides the magnificent views of the combination of land, sea, and cloudy sky, what adds to the picturesque charm of the grassland is the water buffaloes. Some are roaming or grazing on the grassland, others are lying on the ground, while still others are soaking leisurely in dirty mud ponds. These buffaloes get a lot of attention as visitors tend to take pictures with them.

According to a local resident surnamed Hsiao who is the biggest buffalo farmer in this area, water buffaloes in Taoyuan Valley were mainly used for plowing paddy fields. But nowadays, they are primarily for tourism purposes.

The Daxi Line is the most challenging one, as it is relatively steep. The first 3 km section is in the woods of “Fanshuliao” (Sweet Potato Mountain, 蕃薯寮山). After that, there is another 2 km path leading to the grassland of Taoyuan Valley. Along the way, there are about 3,000 stone steps that ascend nearly 500 meters (1,640 feet). So it is basically more suitable for experienced hikers.

The Shiguanyin Line (Stone Guanyin Line) was named after a stone Guanyin temple located about halfway up the mountain. It is generally considered an easy route, and it is a nice hiking trail. The first section of this trail is rather flat and shaded. In the middle section, there are some steep steps that ascend continuously to about 300 meters above sea level. After passing that section, visitors can enjoy the beautiful Pacific Ocean and Guishan Island.

The Caoling Line traverses the ridgeline of the coast mountains. Most of this trail is made of wood or stone steps, and the rest of it is a dirt path. It is basically comfortable to walk along this route, but there are only a few shaded areas on this line.

The Neiliao Line is generally considered an easy route that takes approximately 30 minutes to get to the grassland. The first stretch of this popular trail is shaded by trees and bamboo. The middle part is partially shaded, and the final section is not shaded at all.