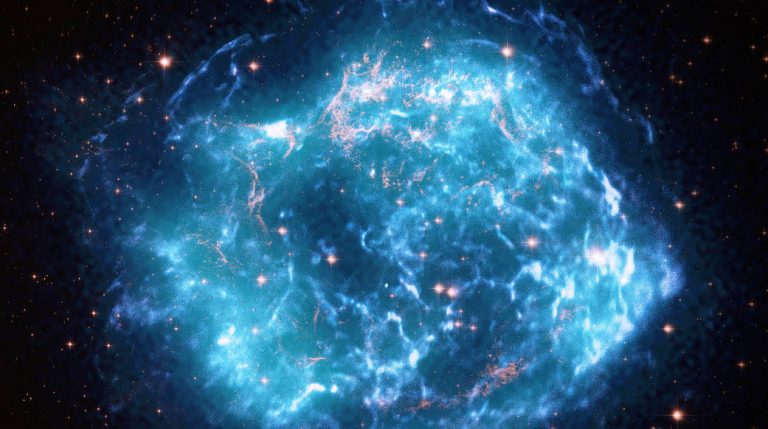 An international research team led by the University of Minnesota has measured the size of a star that exploded more than 11 billion years ago. (Image: X-ray: Chandra via NASA)

An international research team led by the University of Minnesota has measured the size of a supernova that exploded more than 11 billion years ago. Detailed images show the exploding star cooling and could help scientists learn more about the stars and galaxies present in the early universe. The paper is published in Nature.

Patrick Kelly, a lead author of the paper and an associate professor in the College of Science and Engineering, said:

“This is the first detailed look at a supernova at a much earlier stage of the universe’s evolution. It’s very exciting because we can learn in detail about an individual star when the universe was less than a fifth of its current age, and begin to understand if the stars that existed many billions of years ago are different from the ones nearby.”

The red supergiant in question was about 500 times larger than the Sun, and it’s located about 60 times farther away than any other supernova observed in this detail. Using data from the Hubble Space Telescope and the Large Binocular Telescope, researchers were able to identify multiple detailed images of the red supergiant because of a phenomenon called gravitational lensing, where mass, such as that in a galaxy, bends light. This magnifies the light emitted from the star. Kelly said:

“The gravitational lens acts as a natural magnifying glass and multiplies Hubble’s power by a factor of eight. The images we captured show the supernova as it was at different ages separated by several days. We see the supernova rapidly cooling, which allows us to basically reconstruct what happened and study how the supernova cooled in its first few days with just one set of images. It enables us to see a rerun of a supernova.”

The researchers combined this discovery with another one of Kelly’s discoveries from 2014 to estimate how many stars were exploding when the Universe was a small fraction of its current age. They found that there were likely many more of these phenomena than previously thought. Wenlei Chen, the first author of the paper and a postdoctoral researcher at the College of Science and Engineering, said:

Provided by University of Minnesota [Note: Materials may be edited for content and length.]