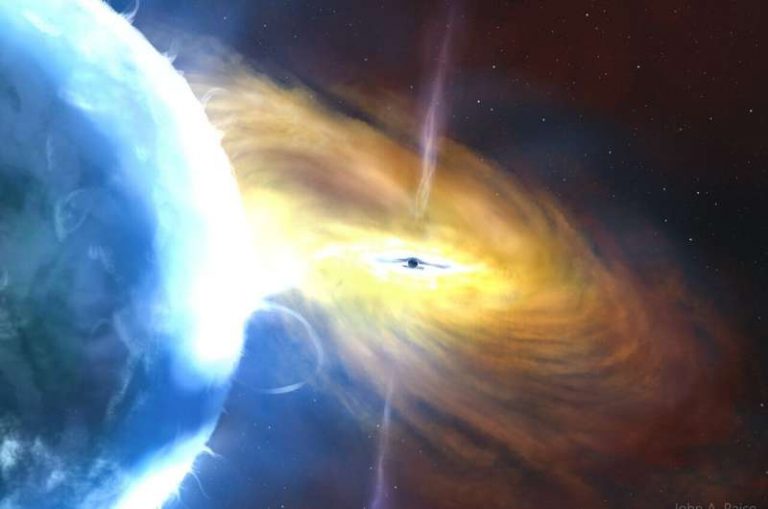 An artist’s impression of the Cygnus X-1 system, with the black hole appearing in the center and its companion star on the left. (Image: John Paice)

Researchers’ recent observations of a stellar-mass black hole called Cygnus X-1 reveal new details about the configuration of extremely hot matter in the region immediately surrounding the black hole. Matter is heated to millions of degrees as it is pulled toward a black hole. This hot matter glows in X-rays. Researchers are using measurements of the polarization of these X-rays to test and refine models that describe how black holes swallow matter, becoming some of the most luminous sources of light — including X-rays — in the universe.

The IXPE measures X-rays given off around black holes

The new measurements from Cygnus X-1, reported on Nov. 3 in the journal Science, represent the first observations of a mass-accreting black hole from the Imaging X-Ray Polarimetry Explorer (IXPE) mission, an international collaboration between NASA and the Italian Space Agency (ASI). Cygnus X-1 is one of the brightest X-ray sources in our galaxy, consisting of a 21 solar mass black hole in orbit with a 41 solar mass companion star. Lead author Henric Krawczynski, ​professor of physics in Arts & Sciences at Washington University in St. Louis and a faculty fellow in the university’s McDonnell Center for the Space Sciences, said:

“Previous X-ray observations of black holes only measured the arrival direction, arrival time, and energy of the X-rays from hot plasma spiraling toward the black holes. IXPE also measures their linear polarization, which carries information about how the X-rays were emitted — and if, and where, they scatter off material close to the black hole.”

Combining the IXPE data with concurrent observations from NASA’s NICER and NuSTAR X-ray observatories in May and June 2022 allowed the authors to constrain the plasma’s geometry — i.e., shape and location. The researchers found that the plasma extends perpendicular to a two-sided, pencil-shaped plasma outflow, or jet, imaged in earlier radio observations. The alignment of the direction of the X-ray polarization and the jet lends strong support to the hypothesis that the processes in the X-ray bright region close to the black hole play a crucial role in launching the jet.

The observations match models predicting that the corona of hot plasma either sandwiches the disk of matter spiraling toward the black hole or replaces the inner portion of that disk. The new polarization data rule out models in which the black hole’s corona is a narrow plasma column or cone along the jet axis. The scientists noted that a better understanding of the geometry of the plasma around a black hole can reveal much about the inner workings of black holes and how they accrete mass, Krawczynski said:

“These new insights will enable improved X-ray studies of how gravity curves space and time close to black holes.”

Related to the Cygnus X-1 black hole specifically, co-author Michal Dovčiak at the Astronomical Institute of the Czech Academy of Sciences explained:

“The IXPE mission uses X-ray mirrors fabricated at NASA’s Marshall Space Flight Center and focal plane instrumentation provided by a collaboration of ASI, the National Institute for Astrophysics (INAF), and the National Institute for Nuclear Physics. Beyond Cygnus X-1, IXPE is being used to study a wide range of extreme X-ray sources, including mass accreting neutron stars, pulsars, and pulsar wind nebulae, supernova remnants, our galactic center, and active galactic nuclei. We’ve found a lot of surprises, and we’re having a lot of fun.”

A second paper in the same issue of Science was led by Roberto Taverna at the University of Padova and described the IXPE detection of highly polarized X-rays from the magnetar 4U 0142+61. “We are thrilled to be part of this new wave of scientific discovery in astrophysics,” Krawczynski said.

Provided by Talia Ogliore, Washington University in St. Louis [Note: Materials may be edited for content and length.]