A Girl’s Journey Through a Flood to Enlightenment 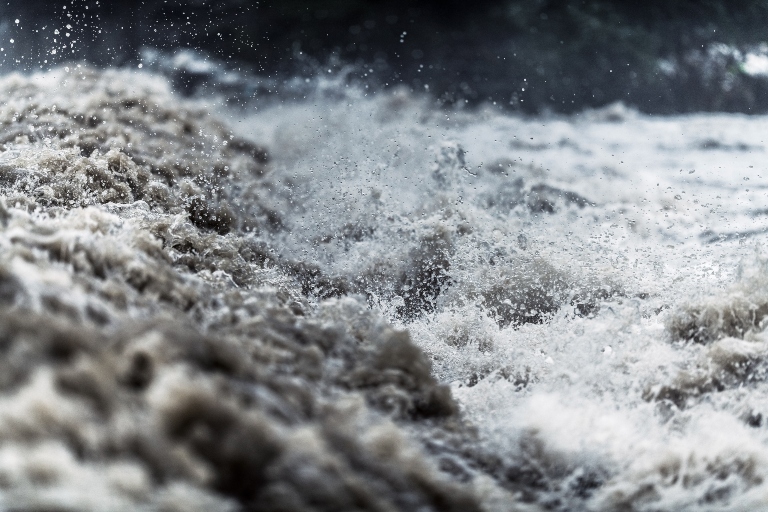 A flood in Zhejiang and Jiangsu provinces during the Yuan Dynasty submerged many villages and farmlands. (Image: Welcomia via Dreamstime)

A flood in Zhejiang and Jiangsu provinces during the Yuan Dynasty submerged many villages and farmlands. Fortunately, it happened in the daytime, so many people who got the news made it out in time, but one family consisting of a 15-year-old daughter and her mother had trouble walking and were not as fortunate.

Their house was in a low-lying area, and as the water entered their home, the mother said: “Hurry up, my child, you have to go now; leave me alone here.” The girl refused and tried to carry her mother on her back.

It was very hard for her. Finally, her mother used all her strength to push the girl outside. Suddenly, the house collapsed, and her mother drowned. Once the girl saw this, she fainted.

When she regained consciousness, she found herself lying on a boat with a man guiding it and a lady beside her. The lady brought her hot water to warm herself once she saw the girl awake. She thought of her mother and cried bitterly, and she didn’t know how to face this big blow. Finally, the boatman tried to comfort her by saying:

“Oh, my child, this flood is a big disaster, and your mother was not the only one who lost her life.”

The girl then wondered. It was always said that God is compassionate and kind to human beings, so why didn’t God stop this disaster, and why should humans bear the grief of losing their loved ones?

Several days later, there was another flood. Since they were on the boat, they were safe. The man and woman tried their best to save others, and several times they were almost dragged into the water by the drowning people. During their last rescue attempt, the boat couple both drowned.

The girl was left on the boat, which was too heavy for her to row, so that she could do nothing except drift with the tide. Five days passed, and the little boat finally beached on an island where the girl almost died of hunger and thirst. It was in the afternoon when she heard the sound of an old lady banging her alms bowl, exclaiming:

“I come from Heaven and have wandered about. While begging alms with this bowl I’m showing my true self and wondering, when shall the young lady who is as pure as a diamond and fresh as a flower come?”

Once the young lady heard this, without knowing where the strength came from, she shouted: “My favorite flower is the lily which is as pure as a diamond.” Upon hearing this, the old lady hurried to hold the dying girl in her arms, looking at her like a compassionate grandmother.

The little girl began to beg for alms with the old lady. Then, ten years later, when they were hiding from a storm in a temple, the old lady asked her: “Why do you like lilies? And why do you like diamonds?” She smiled: “I think a person should be as fresh as a lily and as pure as a diamond.”

Hearing this, the old lady said:

“It’s normal for a human being to like both of them! For example, you see many people living on the beach go fishing, but many of them were drowned. I felt sorry for those people. So I always begged at the beach.

“All those people who gave me some food, and never committed any wrongdoings, such as killing or robbing people, I would try my best to rescue them.”

The girl was shocked to listen to this and asked:

“Do you mean to say that you are a reincarnated Bodhisattva?” The old lady said compassionately: “It doesn’t matter who I am, but you should know one most important thing — we must rescue people from calamity on the condition that the person being saved should believe in the existence of gods; Otherwise, it would be against the rule of the gods to rescue him.”

On hearing this, the girl immediately understood, and she knelt and asked the old lady to pass the ability to rescue people from disasters to her, so she would also be able to save people. Seeing her sincerity, the old lady accepted her as a disciple and told her:

“I was there with you when you were in your hometown, because you have very good inborn quality, and you are a filial and brave young lady. I knew that although you were young, you tried your best to help others.

“I also knew that though your mother passed away in that flood, that once you consummated in your cultivation, she would also be blessed, as would the boat couple who rescued you. Actually, what you experienced before only proves to you that the human world is impermanent, so you shouldn’t be attached to the human world.

“Did you notice that for the 10 years that you stayed with me, I didn’t really care how others treated us, and all those who gave us food, I did my best to rescue them from calamity.

“And for those people who treated us evilly, I also gave them many opportunities to become better; however, for those who are too bad, I can’t do much but just let what should happen to them happen to them.”

The girl was even more determined to follow the old lady once she heard these words. When the girl was in her fifties many years later, the old lady told her: “I have to go now.” She asked the old lady curiously:” My master, where are you going to go?”

A Bodhisattva before her

The old lady asked her to turn away. Once she looked back, standing before her was not the old blind lady anymore but a Bodhisattva with incomparable majesty and a kind of compassion that no words in the world can describe. She fell to her knees and bowed.

Following the Buddha’s finger, she saw countless boats drifting on the vast sea in a gusting wind, and the Bodhisattva grabbed many little boats in her hands while many others disappeared into the ocean.

She also saw that on the sails of those boats in the Bodhisattva’s hand were the words “blessed” or “virtuous,” while there was always a big black circle on those boats that disappeared into the ocean.

After showing her these, the Bodhisattva gradually rose into the air. Finally, she knelt to bid farewell to her master. When the Buddha was in the air, she said:

“Because of compassion for living beings, I came to this human world. One person’s decision to be good or evil can lead to two different results. Now it’s your turn to follow me. Compassion can save people from calamity.”

After hearing these words, she was enlightened and wandered the coastal provinces, begging for alms and teaching people to be good and kind. At the same time, she kept improving her nature, returned to Heaven when she was 99 years old, and finished her mission.