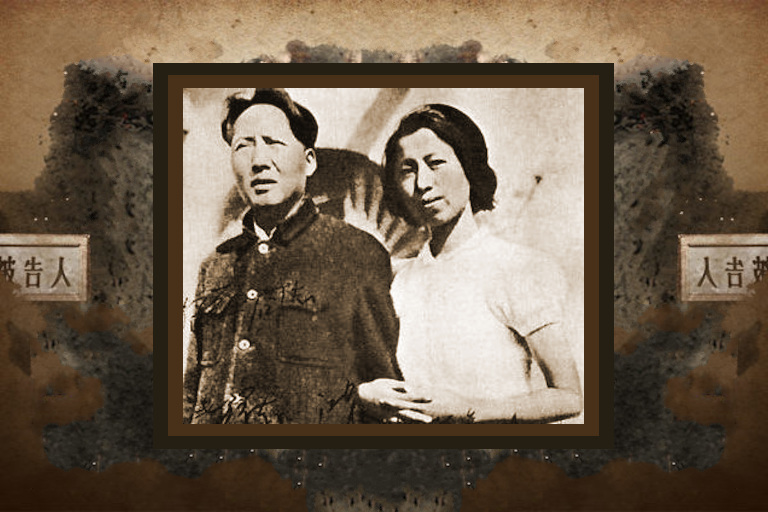 For 10 years during the Cultural Revolution, Jiang Qing, former First Lady of the People’s Republic of China, wielded dictatorial powers over hundreds of millions of people. (Image: via Nspirement staff composite)

For 10 years during the Cultural Revolution, Jiang Qing, former First Lady of the People’s Republic of China, was submissive to only one person, but she wielded dictatorial powers over hundreds of millions of people. Her malevolent influence propelled her fast climb to the top. She was vindictive, arbitrary, and thoroughly corrupt. No big surprise: She eventually ended up a tragic figure of her own making.

The marriage between First Lady Jiang Qing and Mao Zedong

The bloodthirsty Mao Zedong is said to have had four wives during his life. The first wife, Luo Yixiu, died after three years of marriage; the second wife, Yang Kaihui, was accused of being disloyal by Mao and he ordered her to be executed by Kuomintang officials; he married his third wife, and before being granted a divorce from her, the 45-year old Mao married the 24-year-old Jiang Qing in a cave in Yan’an in November 1938.

Jiang and Mao hit it off with each other. For more than 25 years, Jiang had no visible political role. Then in 1966, Mao launched the Cultural Revolution and Jiang became one of the movement’s poster girls and one of its most zealous leaders. During the Cultural Revolution, the two even sang and performed together a “grand drama” that has been stinking for ages.

During the Cultural Revolution from 1966 to 1976, some of Jiang Qing’s vindictive crimes can be summarized and divided into five categories.

Eight hundred million people all knew that she could not be touched or offended. The common people knew her measure well, as did the minor officials and the higher-ranking officials. They particularly knew that the scary part of her lies was not based on her “first” or her “second” claim, but on her “third” crutch.

Jiang’s first secretary, Yan Changgui, wrote in his memoirs: “Mao Zedong had great trust in Jiang Qing during the Cultural Revolution, and the most powerful proof is that Mao wrote to Jiang on August 4, 1967, proposing to arm the leftists by sending guns to them. Later, this letter was conveyed to the Politburo through Jiang, and implemented throughout the Party and the whole country.”

Yan Changgui said that Jiang Qing also lived up to Mao Zedong’s “high expectations.” For every significant strategic deployment of Mao Zedong during the Cultural Revolution, Jiang Qing responded aggressively and implemented each one with all her capabilities.

Jiang Qing said: “I am Chairman Mao’s dog.” This is a true portrayal of the relationship between Jiang and Mao. Mao made full use of this mad “dog” during the Cultural Revolution and cherished her debased nature very much. For Jiang, as Mao’s “dog,” she used this power against the people, and at the same time, she was always loyal to her “master.” She did not say a word against Mao until her suicide in 1991.

Jiang Qing, losing the protection of her master, is quickly dealt with, arrested, and sentenced

On January 25, 1981, Jiang was sentenced to death, with a reprieve of two years by the Special Court of the Supreme Court of the Communist Party of China. She was thrown into Qincheng Prison.

The court found Jiang Qing guilty on the charges : (1) Attempts to seize power by organizing militant coups; (2) Subverting the government; (3) Counter-revolutionary propaganda and incitement; and (4) Treason.

Jiang Qing appeared unrepentant from beginning to end and did not confess her guilt.

In her final statement, Jiang Qing said: “Now you arrest me and try me to smear Chairman Mao. The person you are attacking is Chairman Mao. There is a saying in my hometown: ‘To beat a dog, you must first see who his master is.’ So now you are beating the master because I am Chairman Mao’s dog. For Chairman Mao, I am not afraid of your beating. On Chairman Mao’s political chessboard, I am just a pawn, but a pawn that has crossed the river.”

As with everything related to the CCP, controversy surrounds her death

Based on the earliest report from Time magazine published on June 1, 1991: “Jiang Qing hanged herself” because “she was unwilling to endure the pain of throat cancer.” However, they did not disclose the source of the news.

It was later said that while in prison, Jiang was diagnosed with throat cancer, and she hanged herself in a bathroom of the hospital.

Mao Zedong and Jiang Qing were the creators, victims, and engineers of the perfidious and unrestrained savagery of the 10-year-long Cultural Revolution inflicted on the people of China and the world.